Robert Loss looks at Neil Gaiman's Dream Country as a meditation on femininity, power and imagination that nevertheless expresses a "patronal feminism".

The third collected volume of Neil Gaiman‘s series The Sandman, entitled Dream Country (1991, 1995), concludes with a meditation on femininity, power and imagination in “Façade”. Originally published in 1990 as the twentieth issue of the series, “Façade” details the shunning of the forgotten DC Comics superhero Element Girl, whose real name is Urania “Rainie” Blackwell, due to her grotesque appearance: a body quartered and composed of different elements, a ghastly, striated face with sunken eyes, and green hair.

Rainie yearns to end her misery by suicide but is thwarted by her ability to manipulate elements, an ability forced on her when she touched the Orb of Ra. Rebuked by her male pension agent at The Company (a shadowy stand-in for the CIA), and embarrassed in front of Della, a friend still working for The Company, Rainie finally gets her wish when the female eternal, Death, convinces her to appeal to the male sun god Ra.

“Façade” presents itself as a feminist gesture: a critique of the history of victimization experienced by the female characters of the male-dominated, twentieth century, superhero comic-book narrative tradition. This gesture asks us to revise our understanding of that tradition in addition to the historical cultures which created and sustain it. With Rainie, Gaiman alludes to the long lineage of female superheroes victimized in comics—violently abused, depowered and murdered—a trend often described in shorthand by Gail Simone‘s term “women in refrigerators” (1999).

As welcome as the genre criticism in “Façade” is, while emphasizing the victimization of its female protagonist in order to identify sexist social stigmas (particularly feminine beauty), the story maneuvers around and neglects Rainie’s imagination, trapping her within the confines of her apartment at the mercy of her life’s problems instead of considering that Rainie might be capable of inventing solutions to those problems—or, conversely, that she might reassess her problems and find them unproblematic. By fixating on such a recognizable, contemporary issue as feminine beauty standards, we risk overlooking a remarkable fact about Rainie: she’s sane.

This is remarkable because “Façade” asks us to believe (and for decades we have believed, without much critical questioning) that for the five years since her abandonment by nearly all social order, Rainie has lived alone in a tiny apartment on a meager pension with no other job, no friends, no lovers, no family, no pets, seemingly no interests, no art, no politics, all the while surviving multiple suicide attempts. That she lives, says “Façade”, is a tragedy to be corrected. From a different perspective, her living and sanity testify to her astonishing and laudable capacity for bearing her depression. But the story does not celebrate her strength of mind, because it must withhold her imagination so that she’ll remain a tragic figure.

By “imagination” I mean a creative tool for inventing solutions to problems, and in this sense, imagination is the power to transform one’s private and public status through meaningful change. With such an imagination, Rainie might explore any number of late twentieth century subcultures which would welcome and even celebrate her appearance. And what of her career? Exiled from The Company, she never joins the superhero groups often populated by physically altered beings, never pursues vigilantism on her own, and apparently no longer cares much about social justice.

This line of thinking may seem outlandish because it interjects realistic, everyday options into a fabulist tale and, crucially, because it transgresses the boundaries set by the author. But “Façade” has set itself up for such criticism by telling a slice-of-life narrative about the worth of living, emphasizing the realism within this super-reality.

Prior attention paid to “Façade” has focused on the issue of feminine beauty as a cultural norm. In his article “It’s Elemental: Portrayals of Metamorpho and Element Girl” (2011) on his blog Mapping the Multiverse, Ross Murray neatly summarizes the case:

Gaiman’s depiction of Element Girl reads that once a woman’s youthful looks, and therefore her usefulness, are gone, she will effectively be abandoned by society. […] [Gaiman’s] solution to her predicament is to make her suicidal. This other female presence must be dispatched.

A decade earlier, during a series of interviews with Gaiman for The Sandman Companion (1999), Hy Bender concluded a segment on “Façade” by noting a similar criticism, that “at least a surface level, ‘Façade’ can be read as being about a woman who kills herself because she’s no longer pretty” (74). Gaiman responded:

Oh, but the story isn’t about feminine beauty. It could just as easily have been about a male character. What it’s really about is someone whose life has just shrunk. […] She doesn’t see how to get free of [her hopelessness]…except by dying. Is the suicide ending problematic? Quite possibly. Do I as a person think Rainie’s solution was the correct one? No, I don’t. But none of that bothers me, because I feel the ending works in the context of the story; I feel it’s true to itself. (74)

While I find it difficult to believe that a story about the utter depression caused by a lack of normative masculine beauty traits “could just as easily” be written today, that seems beside the point compared to Gaiman’s easy resolution of what the story is “really about” (emphasis mine). When he claims that “[Façade] isn’t about feminine beauty,” he means as an exclusive and excluding theme, but of course “Façade” isn’t only about “feminine beauty” any more than it is only about “someone whose life has just shrunk“—though that is exactly what has happened.

In place of Rainie’s imagination is an adherence to various authorities, systems of order within the comics narrative itself which function as the “sanctioning institution[s]” (O’Reilly 2005: 274) to which female superheroes are beholden and male heroes are not. In “Façade”, these institutions range from the shadowy intelligence agency which provides only a pension check by mail to the superhuman community which is utterly absent from the story. Another source of authority is embodied in Rainie’s one-time friend, Della, who she meets for lunch: when confronted by Rainie’s dis-unified appearance when the “silicate” face Rainie has fashioned slides off, Della gasps, overcome by the social standards of beauty set for women, and Rainie retreats (Gaiman 1991, 1995: 97–99). Here the story suggests the inability of women’s discourse to offer an alternative to the patriarchal, gendered “female” role.

The final appeal to authority within the narrative is made to the mythic and supernatural, which here, as in so many comics, replaces the political. Death says, “Rainie, mythologies take longer to die than people believe. They linger on in a kind of dream country that affects all of you” (109). Mythology outlasts the political, and thus transcends it, which leads to the story overlooking the horror of Rainie’s liberation coming from an appeal to the male god who, in effect, raped her. “Façade” recreates that transformative event from the original Metamorpho/Element Girl stories of the late 1960s in a horrifying sequence in an Egyptian tomb.

Rainie is haunted by the event; literally, she simply touched the orb, but in her dreams, Ra gathers her in his giant hands and holds her wide-legged in front of his pelvis as his massive thumbs mold her breasts like the “mortal clay” he says she is (94–95). Artist Colleen Doran angles the panels, laying one over the other. Rainie narrates, “This didn’t happen. It was just the stone. It didn’t happen like this,” but nonetheless, in the final panel of this chaotic sequence, Rainie’s flesh has been transmuted (95). “I never asked for it,” she says, an allusive response to that vicious, misogynist myth (95).

This is the same Ra who frees Rainie from life. The irony goes unremarked, and Rainie passes eagerly at the story’s end, enthralled to finally see ‘his’ face behind the sun just before she turns to ash. In the end, Rainie “prove[s] [her] merit to a sanctioning institution” (O’Reilly 2005: 274) that is not only supernatural, but also brutally patriarchal, even if its passing judgment might be considered benevolent.

That ideology, a patronal feminism, is the second system of authority at work in “Façade”, and actually hews closer to what Gaiman claims the story is “about”. It points to the forces which have ”shrunk[en]” Rainie’s life, but does not allow Rainie to confront and transform them or herself. Instead she must appeal to a patron, who, like the patrons of old, still maintains a degree of authority over the freed subject. Rainie’s freedom—like power in comics so often is for women—is a curse because it’s only allowed to operate within a miserable patriarchy, and thus seems futile. In a sense “Façade” is an attempt at “egalitarian feminism” which is “reformist rather than transformative” (Ebert 1988:45), but it falls short of either since Rainie’s political/imaginative agency is overwhelmed by a supernatural patron.

For this ideology to ‘work’ as a narrative, certain maneuvers are necessary. Because of its concision and ambitions, “Façade” enacts event more than plot and achieves this by obscuring or blanking out significant details: the wasteland of Rainie’s life-story in the five years since she left The Company; the vagueness of how Rainie’s powers actually function; the monochromy of her characterization. These only emphasize the story’s ideology, not unlike a didactic fable, but because the form is a representational narrative, the ideology must nonetheless confront a reader’s sense of verisimilitude, which is always informed by ideology as well.

Thus the most significant defense of Rainie’s lack of imagination is her depression, but here we run into the conflict between ideologies of verisimilarity (“what is like life”), and narrative choices made to support the story’s “message”. Depression impedes imagination; medically, we can point to this confidently. And yet there are numerous gaps in the diagnosis asserted by “Façade”, including potential actions—seeking psychiatric care, for instance—which are never addressed. The narrative erasure of Rainie’s backstory doesn’t much help an argument, since it does nothing to suggest that Rainie ever possessed such an imagination, though as Murray (2011) notes, when last we had left Rainie in the late 1960s, she seemed vibrant and healthy.

The critique, then, is that “Façade” carries out a sympathizing strategy in the service of what is arguably a ‘feminist’ reassessment of the comics genre of the superhero, but which reveals a masculine, romanticized benevolence toward Rainie that defines her solely as victim, engenders her in a male-defined system, keeps her from power and the ability to change the status quo condition of her life as a human being, and offers her liberation only through an appeal to a male god, or patron. To achieve its ideological purpose, the story reduces Rainie’s imagination to nil, so that, with the gloss of tragedy, the business-as-usualness of patriarchy may continue. 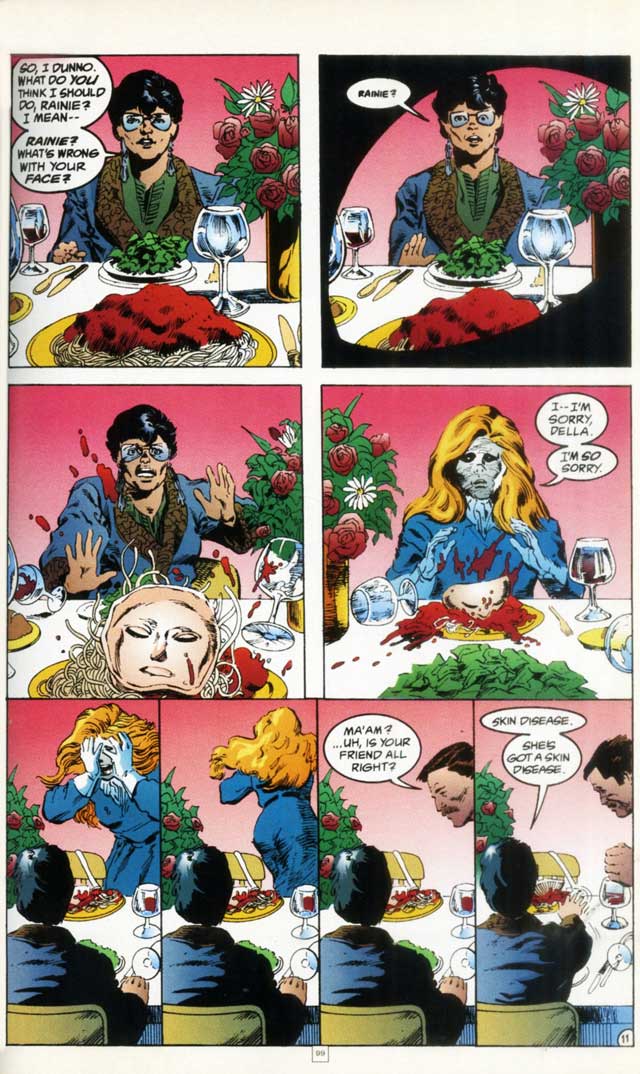 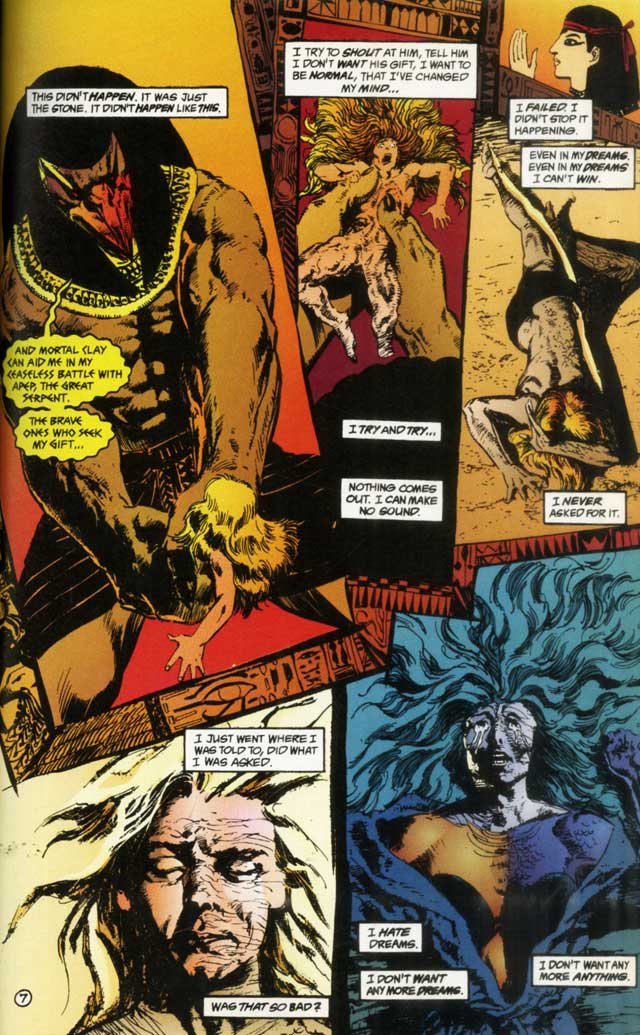