Brian Cremins examines the relationship between nostalgia and comics scholarship as well as his memories of Strange Tales #180 (June 1975).

Nostalgia has played a significant role in shaping the discourse of comics studies. From Dick Lupoff’s fanzine Xero to recent online essays by Kailyn Kent and Noah Berlatsky, nostalgia provides a starting point for those who would map the forgotten landscape of the past.

In their introduction to All in Color for a Dime (1970), Lupoff and Thompson describe the challenge their contributors faced in balancing nostalgic impulses with a more refined analytical sensibility: “Each author was asked to be a three-headed monster, one head that of a misty-eyed nostalgic, another that of a bibliographically inclined research scholar, and the third that of a social-literary-artistic critic” (Lupoff and Thompson 1970: 14). If nostalgia is a monster, then, it is only one face of a much larger beast, an entity as terrifying and seductive as any four-color supervillain.

As I trace the etymology of the word nostalgia, I will also examine an artifact from my childhood: Jim Starlin’s “The Judgment” in issue #180 of Marvel Comics’ Strange Tales (June 1975). This comic book has revealed to me some of the mysterious narratives and unspoken ideologies which shaped my identity as a child and which haunt me as an adult.

As Susan Stryker reminds us, a monster, after all, is a kind of prophet: “‘Monster’ is derived from the Latin noun monstrum, ‘divine portent,’ itself formed on the root of the verb monere, ‘to warn’” (Stryker 2006: 246—247). If nostalgia is a monster, then, it is the shape-shifting embodiment of some sort of revelation. What appears to be an illness of memory, as Edward S. Casey has argued, might in fact be a condition of the imagination, especially if “the past at issue in nostalgia is the past of a world that was never itself given in any discrete present moment” (Casey 1987: 366). The affection and longing we feel while reading an old comic book might have nothing to do with memory. Rather, these feelings might represent a desire to invent or imagine a world which did not exist.

Bart Beaty offers a thought-provoking study of these nostalgic longings and their impact on the development of comics fandom in Comics Versus Art (2012). In an analysis of a J.C. Vaughn essay from the 1999 edition of the Overstreet Comic Book Price Guide, Beaty discusses the impact of nostalgia on what he calls the “second wave” of comics fandom which exerted its influence from the early 1960s through the 1980s (Beaty 2012: 278—279). Vaughn, as Beaty points out, suggests that

the true collector seems to balance two distinct conceptions of the fetish that are inherent in the act of collecting. In both the Marxian and Freudian notion of the fetish, the object overcompensates for a missing wholeness that the purchaser is unable to attain by, respectively, marking a site of loss or compensating for it. (Beaty 2012: 283)

Beaty’s reading of Vaughn, however, suggests that the collector has lost something which he or she is trying to recover or replace. If nostalgia represents an attempt to imagine a past moment which did not exist (or which existed but can only be recovered in fragments of memory which fail to coalesce into a coherent narrative), then the collector who searches for and accumulates these fetish items will never be satisfied, as he or she is attempting to fill a dark void without shape or dimension. Only an act of the imagination will bring light and presence into that empty space. Is nostalgia, then, an essential component in works of criticism or historical investigation?

A closer examination of Casey’s arguments might be useful to our understanding of the word nostalgia. As he points out, “One of the most striking, and yet curiously confirming, things one discovers in looking into the early history of concerted thought about nostalgia is a decided refusal to identify it as a mode of memory or a form of preoccupation with the personal past” (Casey 1987: 366). Rather, “Johannes Hofer’s 1688 dissertation” describes nostalgia as being “‘symptomatic of an afflicted imagination,’ not of a disturbed memory” (Hofer qtd. in Casey 1987: 366—367).

Fred Davis provides additional context for Hofer’s definition in his book Yearning for Yesterday: A Sociology of Nostalgia. The word itself originates “from the Greek nostos, to return home, and algia, a painful condition—thus, a painful yearning to return home” (Davis 1979: 1). But how do we define home? How do we remember it? This was the first question I asked myself when reading “Judgment Day.”

I discovered a number of unexpected affinities between my experiment in nostalgia and the themes in this issue of Strange Tales. Adam Warlock, for example, is a character who embodies a sense of dislocation and homesickness. As the text box which opens this issue reminds us, the hero, although designed “to be Earth’s man of the future,” was “forced to abandon his native planet because of his alien ways” and now “wanders the stars seeking LIFE!” (Starlin 1975: 1; all caps in the original text). 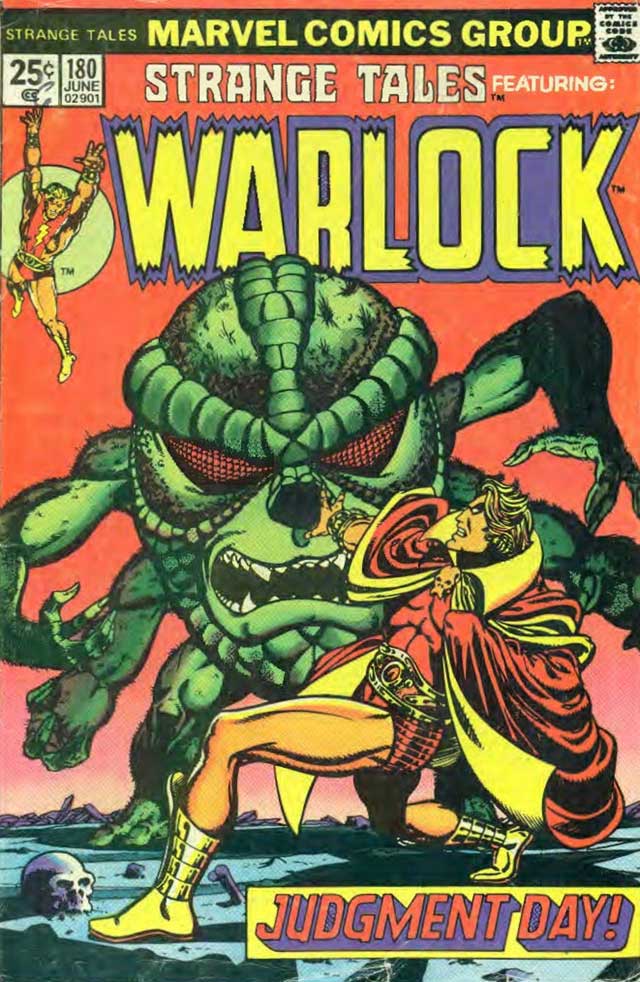 Most superheroes, of course, are wanderers for whom “LIFE” is a synonym for family. These characters seek to reestablish a connection with a lost family (Billy Batson’s reunion with his sister Mary, for example) or they set out to establish a new family unit after the loss of the original (Superman’s doomed planet, Batman’s murdered parents). In reading “Judgment Day” again, I remember my maternal grandmother, Patricia Stango, who found the comic book for me at a yard sale sometime in the early 1980s. I would have been 9 or 10 years old at the time. 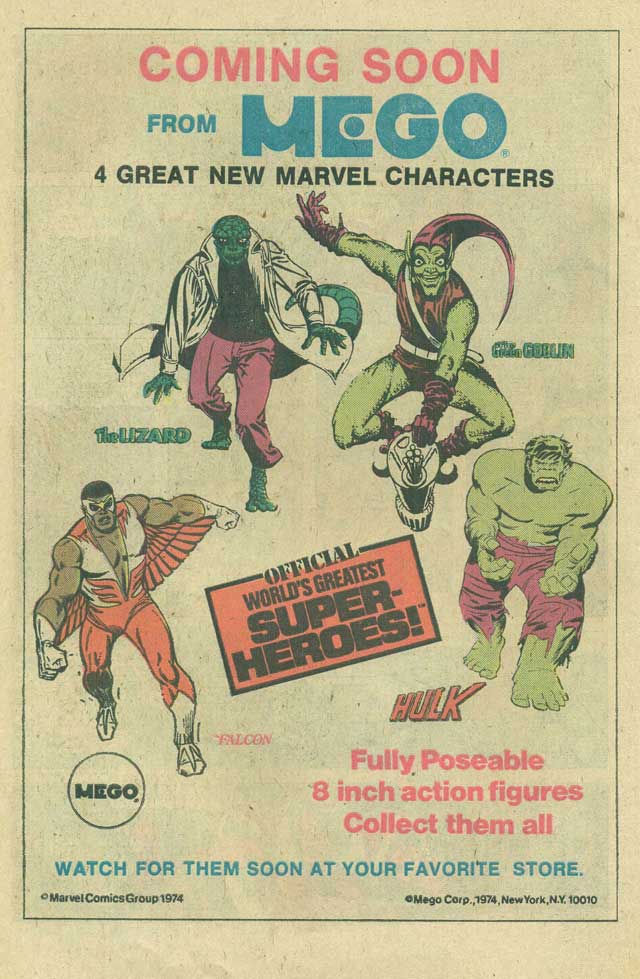 My grandmother, her sister Annie Grigoraitis, and her sister-in-law Judy Budris devoted Sunday afternoons to garage sales and lunch at Bacco’s Restaurant on Thomaston Ave. in Waterbury, Connecticut. Another strange but telling affinity: Waterbury, as Bradford W. Wright reminds readers in Comic Book Nation, was also the home of Eastern Color Printing, which “handled the color printing for pulp magazine covers, newspaper syndicates, and Dell’s The Funnies” and would go on to produce Famous Funnies after two employees, Harry Wildenberg and Max Gaines, suggested the company experiment with “an economical eight-by-eleven-inch pulp magazine of color comics” (Wright 2001: 3). 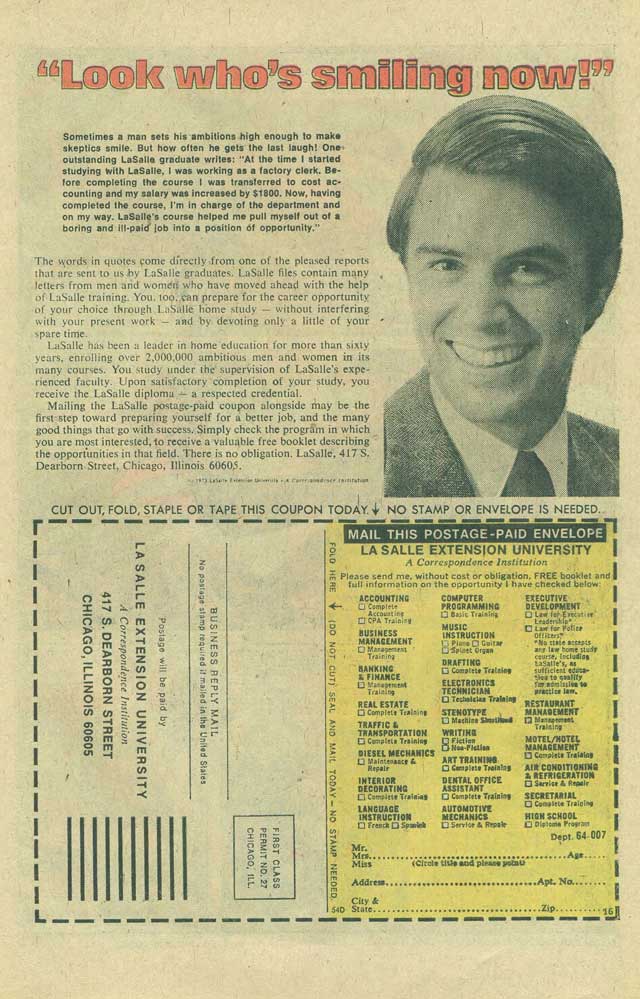 This Adam Warlock adventure challenges me to recall Waterbury, which, in my childhood memories (dreams?), is a world of stories. That I would grow obsessed with comic books seems almost inevitable to me. If Waterbury’s Eastern Color Printing was the birthplace of comics, did it open some sort of nexus connecting a fantasy world with the Brass City, now part of the state’s rust belt, but at one time a leader of industry in the Northeast?

I began reading comic books, especially those featuring characters from the Golden Age, because I thought they might reveal to me more of my grandmother’s world. Perhaps I believed that by immersing myself in words and pictures I might surface again with insights into the historical past of my loved ones. I listened attentively to my grandmother’s stories of the ghosts who pulled the covers from the beds of the rooms in her Lithuanian parents’ boarding house. I learned about my grandfather’s service in the Army War Show and in Tunisia during World War II. She listened to Frank Sinatra croon on WWCO. She recited lines from The Shadow. I study the cover of this comic book—Starlin’s drawing of Adam Warlock framed in red and gold as he struggles with the villainous Kray-Tor—and I remember the past: a patch of sunlight on the red carpet of my bedroom as she hands the book to me. She is gone. But as I write this essay, she and I remain in dialogue with each other.

Why, then, as I read the story again, this time here in Chicago, in the present, am I less interested in the words and pictures of Starlin’s narrative and more taken with its advertisements? One of the ads represents a realm of fantasy while the other expresses adult concerns and anxieties. These are the twin worlds of my childhood: first, the world of the imagination as represented in an ad for Mego’s popular series of superhero dolls and then the world of competition and responsibility as expressed in a testimonial for LaSalle Extension University in Chicago.

On page 4, Mego advertises an “Official” selection of the “World’s Greatest Superheroes!” while on page 5 LaSalle offers a real-world opportunity for readers inspired by Adam Warlock’s example of self-empowerment.

Of the comic’s thirty-two pages, thirteen are devoted to ads (sixteen pages, if one also counts the inside and back covers). On a page opposite images of the Mego superhero figures is a photograph of a young man wearing a blazer, a white shirt, and a tie. “Look who’s smiling now!” proclaims the headline of the advertisement for LaSalle. The Mego and LaSalle ads promise that their products will satisfy the desires of Adam Warlock’s readers. The fact that each Mego doll is “Fully Poseable” gives the consumer and the collector the opportunity to relive the action and melodrama of the comic book stories featuring these characters.

Meanwhile, LaSalle Extension University offers readers a different set of superpowers: a quiet form of revenge on the indifference of the marketplace: “Sometimes a man sets his ambitions high to make skeptics smile. But how often he gets the last laugh!”. This testimony of an “outstanding LaSalle graduate” (presumably the young man in the photograph) ends with an assurance of success:

Here I have conjured memories of my grandmother which are linked to places of exchange: first, I recalled her Sunday afternoon outings at yard sales and flea markets, and the lunches she shared at an Italian restaurant with her sister and her sister-in-law. Then, as I examined the comic book, I was transfixed by the smiling face of the LaSalle graduate and his success narrative. 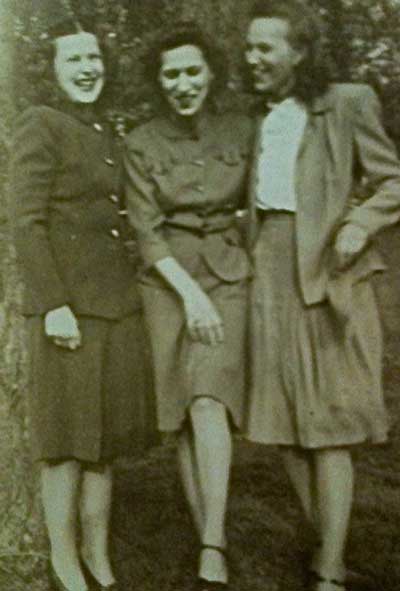 Brian Cremins' grandmother, Patricia Stango (center), with her other sister-in-law Helen Budris (left) and her sister Annie (right) in Oakville, Connecticut, sometime in the mid-1940s.

Perhaps the nostalgia evoked by old comic books is not, as Bart Beaty describes it, a “pining for a past that can not be recreated” (Beaty 2012: 227). And perhaps nostalgia is less a monster, a being of revelation, than an active presence–the past reborn as it speaks to the present. When memory proves faulty, and imagination has reached its limit, these musty artifacts, these odd remnants of capitalism, remain. My relationship to “The Judgment,” then, is an uneasy but oddly satisfying one, as it urges me to remember a moment in time when I accepted this expression of love, this strange but thoughtful gift.

B. Beaty, (2012).  Comics Versus Art. Toronto: University of Toronto Press. (Please note: citations are taken from the e-book version of this text).