Here, James Baker focuses error as a form of satire. Baker focuses on “The Royal Jersey” (1797), one of George Cruikshank’s etchings of Prince George Augustus Frederick and one that presents a unique form of graphical mishap.

George Augustus Frederick (1762–1830) was a very naughty boy. As Prince, as Regent, as King: he gambled, he fornicated, he drank. He was the paragon of vice, and yet simultaneously an icon of high society: a patron of the arts, a veracious adopter (and at times creator) of the latest fashions, a man to be seen with and hence with whom most—if not all—of Britain’s Georgian beau monde sought or might claim a connection (Parissien 2001, Clark 2004).

For both his follies and his apotheosis among social elites, George was lampooned by satirists, so much so that few histories of his colourful life omit mention of his treatment at the hands of the burins and etching needles of James Gillray and George Cruikshank: horror, gross excess and carnality infuse their satires, saying – without actually saying it – what the printed word could not say. And these satirical prints proved for London-based entrepreneurs and publishers such as Samuel Fores and Hannah Humphrey eminently saleable: the risk of upsetting George and his circle, the risk of upsetting staunch loyalist and royalist customers, proved well worth the profits that could be made.

Typically priced at between 6d and 2s (according to the latest estimates, between £10 and £50 in our money), though often much more, impressions were printed in black and white from copper plate engravings and etchings sold to publishers by artist-engravers: the vibrant colouring typical of surviving impressions happened afterwords by outworkers, the additional costs this incurred the publisher reflected in the inflated price of coloured impressions at point of sale – though this is a story for another day (Donald 1996).

Rather what I want to emphasise here is that all this was a craft process, a process which required skilful artists, engravers, printers, colourists and businessmen to transform an idea into a saleable product. The requirement for human skill meant that occasionally individuals ran out of talent and that errors were made: lines were misplaced and crudely removed, words (which had to be engraved or etched as a mirror image of the final impression) were misspelt, plates slipped in the press, colour was inconsistently applied. And yet none of these errors deterred a businessman such as Fores from selling impressions that came off his printing press: pristine examples may have been sought after – and still are by collectors – but errors and irregularities were to be expected and hence had a place in the market.

One print published by Fores on 22 February 1797 skilfully played on this culture of acceptable errors to attack George, then Prince of Wales. In THE ROYAL JERSEY!! the artist-engraver, the Scots born Isaac Cruikshank, offers a striking portrait of the Prince in profile. Nine years previous, parliament, concerned at the apparent insanity of King George III, had considered if and how to elevate George—the heir apparent—to the position Prince Regent, to accelerate his path to authority: thus here he holds a scroll marked ‘Thoughts on a Restricted Regency’ (Ditchfield 2002, Krumbhaar 1966).

This issue was still hotly debated, not least because Prince George had associated himself with Charles James Fox‘s Whig party: then in opposition, these politicians were known for their supposed sympathy with republican France, a controversial position at a time of Anglo-French military conflict (Mitchell 2005). As a consequence of these political affiliations George here wears a natural wig, known colloquially as a ‘jazy’ or ‘jasey’: a aesthetic half-way house between the wig-less Republican and the lavishly bewigged aristocrat. In Cruikshank’s design this short wig fails to hide George’s lice ridden head which is observable through a parting on the back of his neck: the jasey then betrays, both in itself and in what it fails to cover, his ungenteel and ignoble nature.

This representation of the wig is where the deliberately altered title comes in, for from 1793 the Prince had been connected with Frances Villiers, Countess of Jersey, a socialite nine years his senior. The Prince’s marriage to Caroline of Brunswick on 8 April 1795 did little to prevent the continuation of this attachment: rather Jersey was promoted to Lady of the Bedchamber, the closest personal attendant to her lover’s wife. In a flurry of vicious satirical prints Jersey was cast as a harlot, a crone, a dissembler of marital harmony (in truth, George and Caroline had realised soon after first meeting that they would never see eye-to-eye: their marriage thereafter was little more than an elaborate sham).

The Jersey-Wales connection was public knowledge, and, though ended by 1797, neither the Lady nor the Prince had done much to disguise it (Parissien 2001, Clark 2004). And yet to print in moveable type allegations pertaining to the affair would have been to risk libel. Thus the ‘deliberate’ error in the Cruikshank’s title: he struck through the ‘E’ and the ‘R’ in ‘JERSEY’ and replaced them with an ‘A’ so as to thinly veil his—and his publisher’s—direct printing of the allegations against the Prince, exquisitely disguised as a pun upon the trade convention of printing corrections to errors of spelling in such a manner. 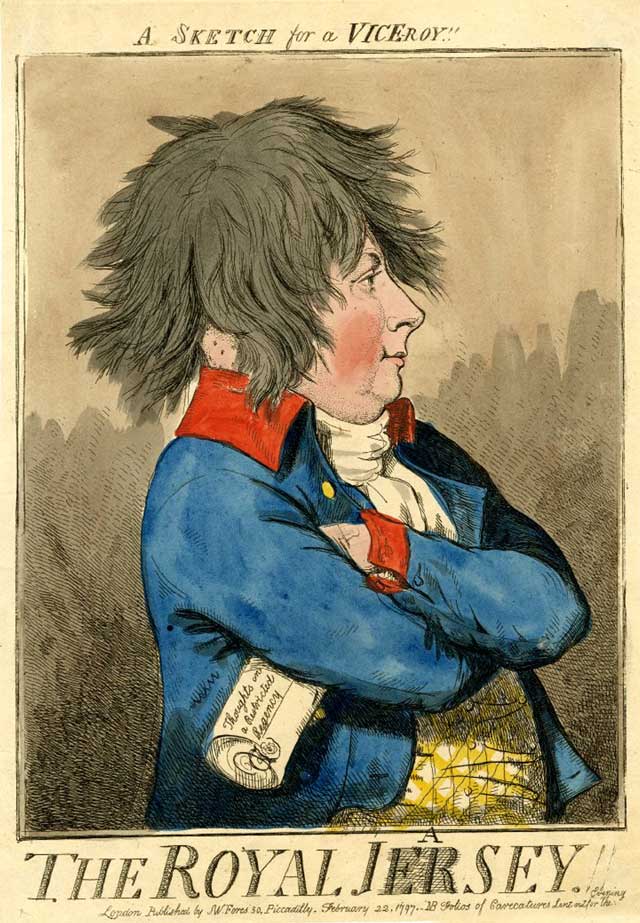 Within the context of a society where naming and shaming individuals in public was considered poor form, such were the lengths that were taken to censure this very naughty boy: this man who elided vice and high society, this man whose erection as the height of metropolitan fashion exemplified the detachment of Britain’s elites from the lives, values and customs of everyday Londoners. And without the existence in the late-Georgian marketplace of graphic satires printed with genuine errors in engraving and etching, this slight on the Prince’s behaviour would never have achieved contemporary communicative efficacy: we can almost hear Cruikshank innocently saying “Oops!”.

D. Donald, (1996).  The Age of Caricature: Satirical Prints in the Reign of George III. New Haven; London: Published for the Paul Mellon Centre for Studies in British Art by Yale University Press.

E.B. Krumbhaar, (1966).  Isaac Cruikshank: a catalogue raisonne with a sketch of his life and work. Philadelphia: University of Pennsylvania Press.