Damon Herd offers a discussion of Dieter Roth’s Solo Scenes, a multimedia presentation that echoes the form of a comic. In his discussion, Herd compares Roth’s work to autobiographical comics, raising the evocative question of whether a work created outside of the comics world can still be considered a comic.

In August 2012 I visited The Fruitmarket Gallery in Edinburgh to view the original presentation of Dieter Roth: Diaries, which was showing as part of the Edinburgh Art Festival. Solo Scenes, Roth’s installation consisting of three sets of shelves, each with approximately forty monitors screening footage of the artist in his homes and studios, was being displayed in The Fruitmarket’s lower gallery.

In total there were 128 screens positioned in a grid on the shelves, each screening a video filmed on a specific day. Every monitor was labelled with a location and date that ran mostly chronologically from the top left monitor showing his studio in Iceland on 7th March 1997, to the bottom right where one of the last monitors displayed the same studio on 26th April 1998. This article puts forward the argument that Solo Scenes can be seen as using the language of comics and could also be said to be a comic, more specifically, an autobiographical comic.

During the Third International Comics Conference at Bournemouth University in June 2012, Bart Beaty presented the paper ‘Towards a Theory of the Site Specific Comic: Dave McKean’s The Rut” in which he argued that McKean’s work was still a comic even though it was a gallery based installation. The paper was part of his latest research project Comics Off The Page, which examines “comics artists who are bringing comics into conversation with other art forms.” The Rut was shown as part of Hypercomics: The Shapes Of Comics To Come in London in 2010, an exhibition that sought to free “artists from the confines of the printed page and singular narrative.”

Both the exhibition and Beaty’s paper have influenced my own thinking on comics in galleries. I was contemplating his arguments when I visited the Dieter Roth: Diaries exhibition, and it led me to think that it is possible to make a site-specific comic despite not working in what Beaty has termed the “Comics Art World” (2012: 37). Beaty cites Arthur Danto’s definition of the art world as “the social organization that provides the theories of art that all members tacitly assume in order for there to be objects that are actually considered art,” and argues that the Comics Art World operates in a similar fashion (Beaty 2012: 36).

Solo Scenes was Roth’s final work; an early version was exhibited in Zurich weeks before his death on June 5th 1998. The installation was literally dazzling with each of the monitors vying for attention and emitting most of the light in the darkened gallery. On screen Roth shuffled in and out of shot or sat reading or working, producing almost static images. He was shown in bed and on the toilet, his life’s intimate and mundane details laid bare. The vast amount of Roth on view created a dizzying effect. Some screens went blank, showed white noise and eventually restarted. When Roth walked off screen on one monitor I expected him to appear in the next, and occasionally he did. As I sat in the gallery staring at all the screens I kept thinking, ‘This is a comic.”

One of the clearest examples of “comics language” in Solo Scenes is the use of “frames.” Thierry Groensteen described his “spatio-topical system” in which the smallest unit of a comic is the panel or frame. The frame can be any shape or size and does not need to have an outline, but the most common frame is the rectangular, bordered panel. The page is a larger “hyperframe,” and the comic as a whole is the “multiframe” (2007: 27).

In Solo Scenes, the monitors function as panels, the individual shelving units work as hyperframes, and the entire installation is the multiframe. The darkness between each screen functions in the same manner as the gutters between panels. Groensteen described the gutter as an absence that allows the reader to project missing images and fill in gaps in the action, a process that Scott McCloud termed “closure” (1993: 63). Perhaps this explains why one expects to see Roth enter from the side of a monitor when he has just walked off camera in an adjacent screen. Each monitor is captioned with the date and location of filming in black text on a strip of white tape just like a narration panel in a comic. Walking into the installation is like opening a double page spread of a comic book.

Groensteen also discussed how relations between panels in a narrative can create meaning, a process he called “braiding” (2007: 147). If an image appears in one panel and is repeated in others, then connections and meaning can be woven (or braided) throughout the narrative. The footage in Solo Scenes allows the viewer to make these connections. One recurring image, which appears across several screens, is of Roth wearing a purple dressing gown. This robe becomes Roth’s costume. In comics a character wears the same outfit in each issue so that they become a symbol, or icon, that the reader can identify more easily, such as The Yellow Kid’s nightshirt or Batman’s cape and cowl. This iconography is designed to catch the reader’s eye, thus aiding the braiding effect and helping suggest movement between panels. 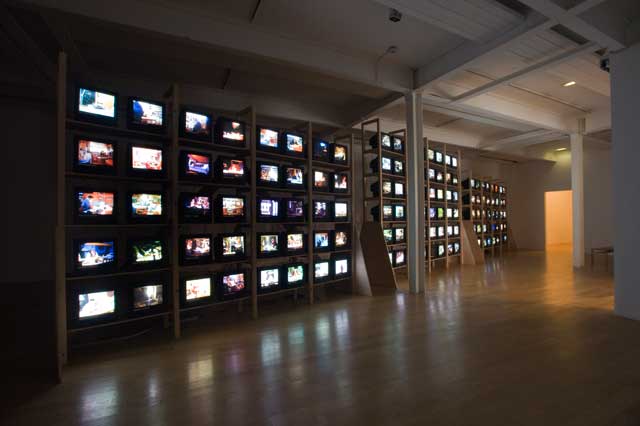 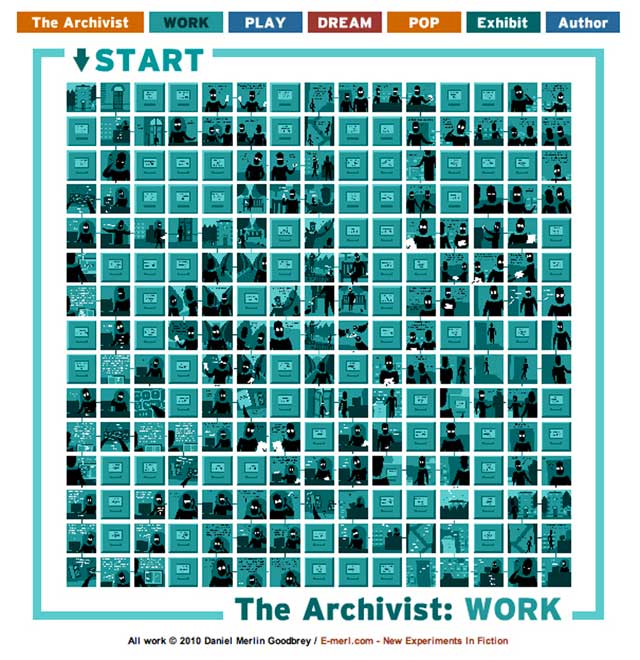 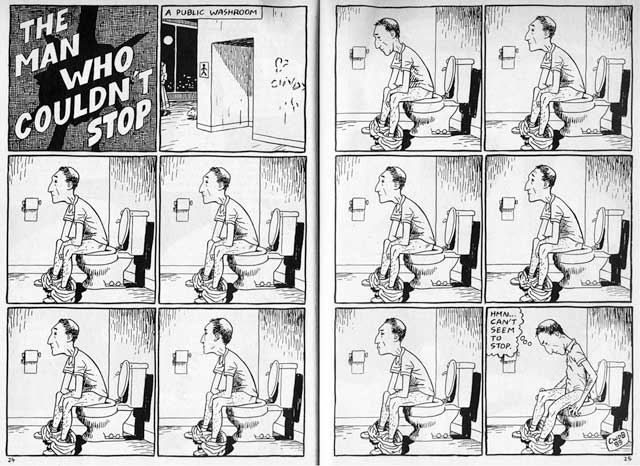 The tight grid structure and overpowering information in the panels of Solo Scenes recalls comics such as Daniel Merlin Goodbrey’s The Archivist, which also featured in the Hypercomics exhibition. The grids in Goodbrey’s work can be read in several directions in both print and digital versions. The narrative does not have to be read left-to-right and top-to-bottom, and one experiences Solo Scenes in similar fashion.

The scenes of Roth on the toilet resemble “The Man Who Couldn’t Stop,” Chester Brown’s short masterpiece of comics pacing and humour from Ed the Happy Clown (1989: 24–25). A prolific autobiographical cartoonist, Brown’s drawing style here shows the influence of Robert Crumb, also no stranger to autobiography. The hatching and minimal changes between panels recalls Crumb’s work on “The Harvey Pekar Name Story” (1977) from American Splendor (Pekar 1996: 1–4). In his typical scratchy style, Crumb draws Pekar talking directly to the reader in panels that change only minutely from one to the next; each panel is subtly different, suggesting the movement of time. Brown, however, uses photocopies to repeat some images and the non-changing drawing suggests a more tedious passage of time.

Roth was an avid reader of autobiographies and he took more consolation from them than he did from fiction (Dobke 2004: 237). He also had an urge to use his life experience in his art, much like Brown, Crumb and Pekar. Roth controlled what was made public in a similar fashion to an autobiographical cartoonist choosing which elements of his or her life to show in comics. Like the cartoonist choosing the layout of each panel and page, “Roth was always conscious of the staged nature of the situation;” he enjoyed being watched and was always conscious of the camera setup and that his actions were clear to the viewer while making Solo Scenes (Jud 2004: 123).

Roth’s work uses, and is similar to, comics but can we call it comics? McCloud defined comics as “juxtaposed pictorial and other images in a deliberate sequence, intended to convey information and/or to produce an aesthetic response in the viewer” (1993: 9). McCloud’s use of juxtaposed was intended to separate comics from moving images.

In reply to McCloud, Dylan Horrocks argued against such essentialist definitions: “Borders are, after all, artificial inventions designed to control the movement of people, commodities and ideas” (2001: 39). In Abstract Comics (2009) Andrei Molotui uses this reasoning to suggest different pieces of abstract art as a prehistory of abstract comics. In a later essay Molotiu states that “any new evolution in an art form (such as comics) expands the purview, and thereby proposes a new definition of that art form” (2012: 84). Definitions should not be set and permanent but allowed to evolve.

Aaron Meskin also argues for moving away from any essentialist classification: “there is a very real possibility that the definitional project is misguided. Moreover, there is no pressing need to come up with a definition” (2007: 376). Meskin argues that comics should be defined by typical rather than specific features and suggests that “perhaps something is a comic just in case it is/was nonpassingly intended for regard-as-comic.”

Roth’s installation contains such “typical features” as panels and captions, and can be classed as Beaty’s “comics off the page.” In his latest book Comics Versus Art (2012), Beaty recounts the debates surrounding the definitions of comics and suggests that, rather than as specific material traits, comics should be thought of as a social world along the lines of Pierre Bourdieu’s theories of The Field of Cultural Production. Beaty also cites George Dickie’s theory that “a work of art is an artefact presented to the art world public, and that the art world public is a set of individuals who are prepared in some degree to understand an object that is presented to them as art” (2012: 36) to support his claim that “comics can be defined as objects recognized by the comics world as comics” (2012: 37).

Beaty’s argument is persuasive as it moves the issue of definition towards context rather than form, and as comics are so formally diverse, and a site of seemingly endless formal experimentation and variation. This is a seductively inclusive argument, but in another respect, it is effectively just another border around what we can claim to be comics. In effect, establishing that comics are produced by and for those in a certain community (the comics art world) limits what can and can’t be considered comics in a different way.

The debate will go on, and it is the debate itself that will continue to inform our understanding of comics. Solo Scenes can be read as a comic even if Dieter Roth is not part of the comics art world and did not intend it to be so. Comics are a “cool” medium, to use Marshall McLuhan’s term (1964: 24), and as such the reader has to engage with them to make them work. Viewers must perform a version of closure to complete the reading of an artwork as comics, whether encouraged to do so by Dave McKean or unintentionally with Solo Scenes. It is not just something that is created by the comics art world that can be comics; something viewed through the debates of the comics art world can be comics too.

A reconfigured version of the Dieter Roth: Diaries exhibition is showing in London at Camden Arts Centre from 17 May – 14 July 2013.