Alex Raymond and Dashiel Hammet’s Secret Agent X-9 is primarily known as Raymond’s other strip, since he started it in 1934 at the same time as Flash Gordon (with Jungle Jim as a topper). Surprisingly, perhaps, Flash Gordon proved more rewarding than a strip penned by one of the early masters of the genre soon to be known as noir. Hammet “did not adapt well to the comic strip medium” (Walker 2004: 200) and had more attractive offers in Hollywood. As to Raymond, he drew it for less than two years. Still, the character, which was later renamed “Secret Agent Corrigan”, proved popular enough to last in comic strip form until 1996, with two adaptations in film serials, in 1937 and 1945.

Secret Agent X-9, is a detective comic strip, which resorts to the form of conventional “realism” to be expected from a narrative based on that specific genre. In the strip, thugs are burly, gangsters are slick and ladies are predictably elegant. I would like to suggest that in establishing and maintaining that “realism”, Raymond had to contend with a number of conventions and constraints, for which he briefly chose an unusual solution: highly detailed figures positioned in front of spatial markers which are highly geometrical and conventional yet never omitted. The fact that he abandoned this option after less than a year on the strip suggests that the resulting tension did not go unnoticed. While it may have been undesirable in the context of such genre-based entertainment, this tension can be put to use in different type of works, in which tension and anxieties were the intended effects. This article concludes on one such example. 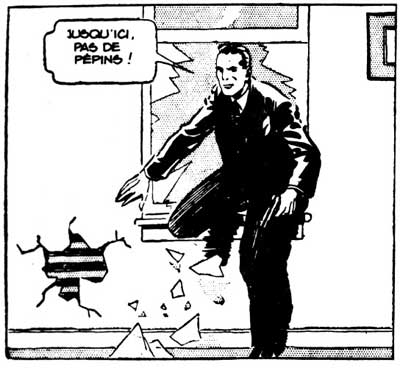 Raymond was rushed for time when producing Secret Agent X-9, with a daily strip and an elaborate Sunday strip to produce (even though early Flash Gordon + Jungle Jim was simpler graphically in 1934–35 than in later years). While the figure work is detailed and energetic, the backgrounds are thus usually kept minimal. In most cases, a few ruled lines and some telling details suffice, even though Raymond also occasionally presents fully-rendered environments, whenever a specific locale had to be established or if the configuration of the place had a role to play in the narrative:

In the panel above the brush and pen work on the hero’s suit, the light shadow under his hand and leg finely delineate a detailed three-dimensional figure. By contrast, no background appears in the window and the shards of glass are mere flat white polygons, projecting approximate shadows. While reading the strip, one barely notices this phenomenon; it functions as a serviceable shorthand for familiar environments. It is worth noting however that this representation is conventional – “iconic” as McCloud would have it (1993: 46) – rather than mimetic, while the character’s depiction, though no less conventional, aims at a form of realism.

In this context, realism can be thought of as a simple “combination of informativeness and accuracy” (Lopes 1995: 278), or rather “appropriate informativeness within a context of use” (282)1. The character himself is still fairly simple compared to a cinematographic image, for instance, but he contains much more information than the background elements: compare the folds of the suit with the framed picture on the wall. He also conforms more to our three-dimensional perception of space than the flat polygons and empty window do. This discrepancy recurs through entire sequences of the strip, though it is not systematic and declines noticeably after the first six months.

This contrast between two types of representation is not unusual in comics. As pointed out by McCloud, “mask” effects are fairly common in comics, with a mix between “iconic” and “realistic” drawings (McCloud 1993: 42–3) for pragmatic or narrative reasons. However, Secret Agent X-9 reverses the usual configuration of these masks, in which characters are cartoony and backgrounds more detailed. What we have here is therefore not only the use of well-established convention, but an idiosyncratic approach to “description” in comics, problematic as that notion may be: in Secret Agent X-9, Raymond’s work provides what we could call a shorthand for plenitude.

Cinema appears as an obvious source for these descriptions. Raymond’s work can certainly be read as an early example of comics being “sidetracked and transformed by the language of cinema in the 30’s” in the words of Chris Ware (Hignite 2007: 241), as contemporary gangster and g-men movies inform his approach to character and places. Even the fixity of the frame, as the strip could be presented in one or two tiers, recalls the cinematic frame. However, it proximity is precisely what allows us to to pinpoint a difference between descriptive operations in comics and in films. Narratologist Seymour Chatman, in Coming to Terms states that description in film is “plenitude without specificity”(1990: 39), while literary descriptions can be precise, but with a narrower scope.

One of the salient features of Chatman’s text is his conviction that there is such an operation as description in films; replicating and transposing his argument would be outside the scope of this article but I would argue that there is also such a thing as description in comics. However, Chatman’s description of the way description functions in cinema cannot be applied without serious qualifications even to such a clearly film-inspired strip as Secret Agent X-9: Raymond merely hints at film’s plenitude. He maintains a mostly coherent diegetic space throughout but relies on the reader’s willingness to ignore the most blatant simplifications2.

This form of description is thus complete yet not exhaustive, betraying a desire not to let the frame be empty, not to let the suggested realism slip away: in the first months of the strip, Raymond drops the background only in a few occasions (less than a dozen panels until June 1934, most of them close-ups on letters, emulating a hollywoodian tradition).

The argument could be made that Raymond is mirroring what could be achieved in literature, by omitting superfluous information, in order to keep the story flowing. However, Raymond’s hybrid approach, in which maintaining a coherent space throughout the narrative is a rigid rule, retains much more information than its literary equivalent. When writing about a roughly similar situation in Red Harvest, Hammet eschewed background description entirely, for instance:

The latch clicked. I plunged in with the door.

Across the street a dozen guns emptied themselves. Glass shot from door and windows tinkled around us.

Somebody tripped me. Fear gave me three brains and half a dozen eyes. I was in a tough spot. Noonan had slipped me a pretty dose. These birds couldn’t help thinking I was playing his game.

I tumbled down, twisting around to face the door. My gun was in my hand by the time I hit the floor.

Across the street, burly Nick had stepped out of a doorway to pump slugs at us with both hands.

I steadied my gun-arm on the floor. Nick’s body showed over the front sight. I squeezed the gun. Nick stopped shooting. He crossed his guns on his chest and went down in a pile on the sidewalk. (Hammet 1926: 52)

The above passage points to a second difference between narration in Hammet’s novel and what Raymond did with his script: redundancy. Raymond has no equivalent for pronouns, and repeats his lushly detailed character from panel to panel. The result is again an idiosyncratic equilibrium between narrative efficiency and “realism”.

What is interesting here is thus not Raymond’s willingness to simplify his background, but his putting in place such a constant tension between completeness and exhaustiveness, between the will to present a world and the unwillingness to imbue it with sufficient details. Once noticed, the effect is slightly jarring, not unlike the impression produced by painted backdrops or rear projections in classical Hollywood movies. It does however suggest the range of possibilities offered to comics when it comes to description, up to this unrealized realism.

Raymond’s compromises with the pressures of his daily production thus led him to explore a direction which runs contrary to the dominant convention in works where “realistic” and “iconic” representations coexist. Because this specific choice has not been naturalised by recurrent use, it is still somewhat arresting. Thus, while Raymond probably did not aim for that effect, Dan Clowes most certainly did, when he used the same tension in Ghost World. 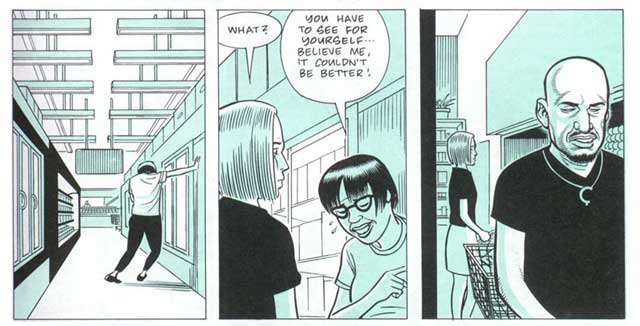 In the graphic novel, a spatially coherent yet at times impossibly geometrical world is juxtaposed with brush rendered characters, creating the eponymous “ghost world”. Clowes even pushes the device further by frequently extending the iconic simplification to the character’s body, leaving only their faces fully rendered, but the method is similar. The accidental disruption has become a fully intentional thematic device, in a comics whose mode of productions and model reader could not be further removed from Raymond and Hammet’s creation.

S. Chatman, (1990).  Coming to Terms: The Rhetoric of Narrative in Fiction and Film. Ithaca, NY: Cornell UP.

This article was published in The Comics Grid on 12 June 2013. On 17 July 2013, the journal moved to a new platform. Regrettably, when migrating the text, some errors were produced. These were subsequently corrected to return the text to the version originally published.