Daniel Clowes is undoubtedly one of the most influential and prolific cartoonists working today, with a career spanning many decades. The Daniel Clowes Reader (Parille 2013) comes at the perfect time – when interest in Clowes from scholars and critics is at a high, but in which he is still perhaps given less critical attention than his peers Chris Ware, Art Spiegelman, and Marjane Satrapi, all of whom are cited twice as often as Clowes despite his large canon of significant works in comics. With recent books being published on Chris Ware by The University Press of Mississippi and the forthcoming Art Spiegelman collection from Drawn and Quarterly, more significant focused, monographic books are emerging in comics and comics criticism, and The Daniel Clowes Reader is a more than welcome addition to this emergence.

Daniel Clowes is undoubtedly one of the most influential and prolific cartoonists working today, with a career spanning many decades. The Daniel Clowes Reader (Parille 2013) comes at the perfect time – when interest in Clowes from scholars and critics is at a high, but in which he is still perhaps given less critical attention than his peers Chris Ware, Art Spiegelman, and Marjane Satrapi, all of whom are cited twice as often as Clowes despite his large canon of significant works in comics. With recent books being published on Chris Ware by The University Press of Mississippi and the forthcoming Art Spiegelman collection from Drawn and Quarterly, more significant focused, monographic books are emerging in comics and comics criticism, and The Daniel Clowes Reader is a more than welcome addition to this emergence.

Rather than providing an exhaustive chronological retrospective, as it would be tempting to do with such a volume, the book is organised into three sections based on distinct areas of discussion which provide thematic arcs: section one explores Girls and Adolescence, focusing on Clowes’ landmark graphic novel Ghost World; section two explores Boys and Post-Adolescence using some of Clowes’ short stories from Eightball; and section three explores the broader and more fluid areas of Comics, Artists and Audiences, including Clowes’ illustrated manifesto, “Modern Cartoonist,” which originally accompanied Eightball #18 as an attached pamphlet in 1997.

The book’s editor, Ken Parille, has curated the book meticulously, which is unsurprising given he is a columnist for The Comics Journal and an expert on Clowes – he was central to both of the other significant books on Clowes, as a contributor to The Art of Daniel Clowes: Modern Cartoonist (Buenaventura 2012), and the interview collection Daniel Clowes: Conversations (Cates and Parille 2010), part of the University Press of Mississippi’s Conversations with Comics Artists series which incudes collected interviews with Carl Barks, Will Eisner, and Art Spiegelman, among others. The Daniel Clowes Reader is, of course, a Clowes collection first and foremost, but it strikes the balance between inviting the reader to enjoy and experience Clowes’ best comics and providing commentary, reflection and enlightening annotation, as well as some scholarly essays and revealing interviews with Clowes himself. 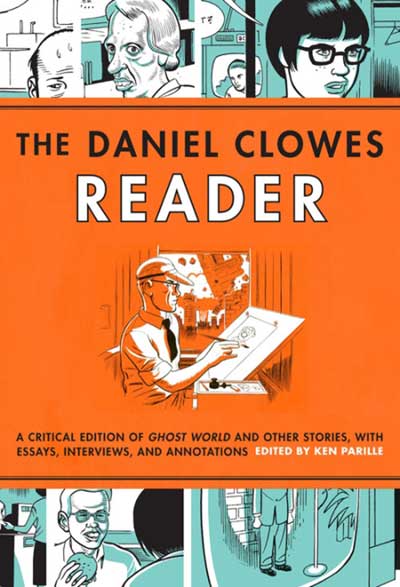 The book’s emphasis is on its inclusion of on Ghost World, which is reproduced in full (with the introduction from the 2008 special edition) and makes for a welcome centerpiece, being Clowes’ most significant and influential work. I found the most useful and stimulating essays in the collection to be those which immediately follow Ghost World, most significantly Pamela Thurschwell’s discussion of adolescence as a ghost world and Ken Parille’s close-reading of Ghost World’s dialogue. Thurschwell’s essay will no doubt be of use to literary critics and comics scholars who wish to discuss comics as literature, as she reads Ghost World in relation to postmodernism and capitalism, exploring how these create the ghost world of the protagonists, Enid and Rebecca. Parille’s close reading of Ghost World’s dialogue focuses on the final line, “You’ve grown into a very beautiful young woman,” said by Enid to Rebecca, who cannot hear her as she is behind the glass window of one of the many dilapidated diners that populate their suburban town. 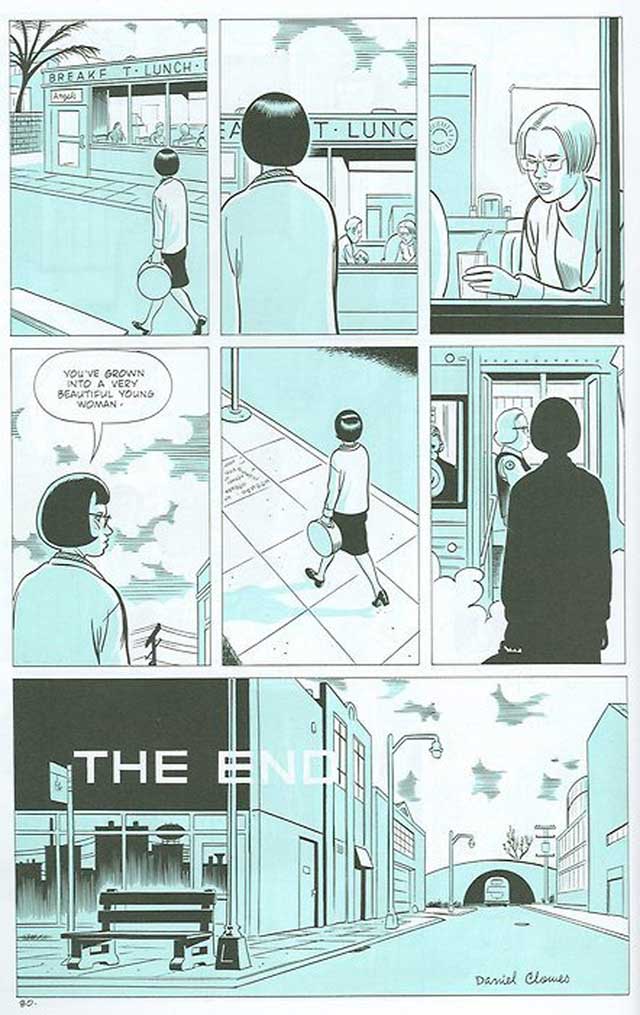 By focusing on this line, Parille reminds us that Clowes has a gift for dialogue and is a talented writer as well as a cartoonist, having collaborated with Terry Zwigoff closely on the script for the film adaptations of Ghost World and “Art School Confidential,” which is the centerpiece of section three. It might perhaps have been interesting to include some of Clowes’ script work or further notes on his work on film to further examine his skill as a writer, as this is only really explored in the interviews with Clowes, who talks of working in film as an enjoyable collaboration, distanced from the solitary occupation of cartooning. 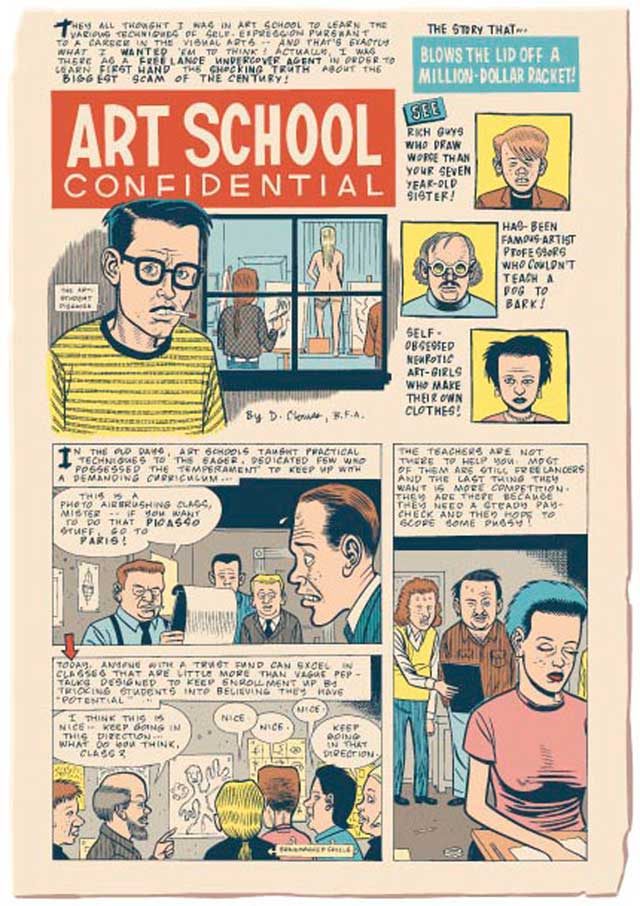 There is certainly very little feeling of omission from section one, though. The annotations, in particular, provide more than adequate detail to historicise Clowes’ comics and place them in the context of the various cultural movements which they explore and portray. The many pages of annotations accompanying Ghost World, for example, are largely a catalogue of the music, literature and kitschy objects Enid uses to find and create her identity, from Sonic Youth to Bruce Lee to zines, poetry collections, and extremely outdated children’s records. Too much attention, however, is paid to Enid’s bookshelf, with the discussion of Ghost World being interrupted by reproductions of Russell Edson’s poems and Ann Roy’s cartoons. These inclusions do allow the reader to enter Enid’s world on a more personal level, but this isn’t strictly necessary, as the annotations are detailed enough to provide this, and the reader could discover Ann Roy for themselves if there was sufficient interest in her work after reading through the annotations.

The same could perhaps have be said of the inclusion of excerpts from Gilmore Tamny’s zine, Wiglet, although these are more closely related to Clowes’ comics and are more significant as they follow an intriguing brief history of the rise of the zine by Kaya Oakes. Clowes’ relationship with the zine culture of the late eighties and nineties and its expressions of artistic freedom and independence is explored throughout the Reader, and offers significant detail and insight into the cultures and countercultures which Clowes has depicted and engaged with on many levels throughout his career.

Joshua Glenn’s essay, “Against Groovy,” picks this up in section two, following a number of Clowes’ short stories which depict the apathy and often misplaced irony of Generation X. Glenn draws the distinction between “Original Generation X” (those born 1954–1963, following the “Boomers”) and the “Generation X” label applied to the slacker culture of the eighties, placing Clowes in the former camp whilst discussing how Clowes satirises both the original and the second Generation X. The short stories “Blue Italian Shit” and “Like A Weed, Joe” depict the earlier generation, with their post-punk nihilist Roger Young as a fitting microcosm, while the later comics “The Party” and “Buddy Bradley in Who Would You Rather Fuck: Ginger or Mary Ann?” depict the grunge-influenced check-shirted slackers of the late eighties-early nineties as similarly failed ironists. Clowes has a wealth of comics with anti-hipster sentiment and depictions of the flaws and foibles of countercultures and Gen X, so once again the choice of the comics in section two reveals Ken Parille’s careful curatorial eye, which provides a coherent and comprehensive body of content in section two.

Section three’s examination of comics, artists and audiences is a timely contribution to the growing scholarly discussion of the aesthetics and cultural status of comics, and will likely help to bring Daniel Clowes into a more prominent position in this discussion. The inclusion of Clowes’ manifesto “Modern Cartoonist” feels relevant and resonant, particularly considering his predictions of comics in the digital age such as that new technology “promises a structural shift…in the reader’s favour, giving him an exaggerated role in the give-and-take between artist and audience” (2013: 333). Section three also includes “Art School Confidential,” the oft-quoted four-page Eightball strip, which was turned into a film (Zwigoff 2006). Considering the significance of “Art School Confidential” to comics artists and the fact that it is perennially Xeroxed and put on art school notice boards, (2013: 290) I would have liked to have seen an essay or two follow the comic in a similar fashion to those which follow Ghost World in section one – instead, we are given only a single page of short annotations.

In fact, the lack of essays makes section three feel somewhat short and stunted. I would have liked to have read Ken Parille, Joshua Glenn’s or any of the other contributors’ thoughts on Clowes’ relationship with his audience and his portrayal of art school. The one essay in section three, by Anne Mallory and Ken Parille, is a significant one; however, and a welcome discussion of the “Ugly” aesthetic which pervades throughout Clowes’ comics and which is a significant part of his unique style. My feelings towards this section, however, are likely due to the high quality of the essays and discussion of Ghost World in section one, which I would have liked to have seen replicated in sections two and three. I realise, of course, that this would have made for a much lengthier book and tipped it into the realm of impenetrability, and that the book’s tagline (“A critical edition of Ghost World and other stories, with essays, interviews and annotations”) is quite clear about its focus on Ghost World, so my wish for a greater section three is no indication of failure on the editor’s part – rather, a desire for more discussion and scholarship around Clowes, spurred by the quality of section one.

The Daniel Clowes Reader is enjoyable and stimulating from beginning to end, and collects Clowes’ most significant works with careful curation. The interviews, essays and annotations are more than relevant, and provide a level of detail unparalleled in any other available book on Daniel Clowes, aside from the aforementioned Conversations and The Art of Daniel Clowes, without overwhelming the inclusion of Clowes’ comics. Ken Parille’s curation and editing is first-rate, and his love of Clowes’ work is clear, but despite this he manages to retain a careful critical eye, as evidenced in his essays and commentary. For anyone studying Clowes at any level, or including his comics in any academic study, I would not hesitate to say that The Daniel Clowes Reader is an essential text. However, due to the its comprehensive nature (especially regarding its annotations), it would also serve as a neat introduction to Daniel Clowes for anyone still to read his comics, and certainly would be of interest to anyone with a passing interest in Clowes, adolescence, aesthetics and cartooning in general.