A review of one of the seminal texts on fan culture, the review discusses the book's influence and relevance more than twenty years after its publication.

Upon writing this review, I was struck by two things. First, that I was writing a review on a book that was written over twenty years ago; and second, that when I originally rated it on Library Thing, I gave it 3.5 out of 5 stars.

The fact that I gave The Adoring Audience a 3.5 is slightly misleading, as it is, to tell the truth, a fascinating read. The reason why I gave it such a relatively low score is because it is now hopelessly outdated in many ways. It was published just on the cusp of the Internet going mainstream, and so by necessity neglects what might be considered the biggest revolution in the history of fan culture.

This is not to say that this isn’t an important book. According to a study by Bielby and Harrington (2007), The Adoring Audience was rated one of the most important publications in terms of influence on the field of fan studies. The participants – fan scholars who were invited to identify “an emergent fan studies canon” (Loc. 3481) – placed it second only after Henry Jenkins’ seminal text, Textual Poachers (1992). Clearly its place in the canon must be justified despite the many years that have passed between its inception and the here and now.

The year 1992 turned out to be a bumper one for fan studies. Not only was The Adoring Audience published, but so too was the aforementioned Textual Poachers, as well as Enterprising Women (Bacon-Smith, 1992); both of which, it might be added, were regarded as significant texts by the scholars in Bielby and Harrington’s study. This oeuvre made a considerable impact on the academic world of fan culture, since, for the first time, these texts served as a comprehensive guide to what was then a little-known (and not particularly highly-regarded) area of study.

Indeed, The Adoring Audience provides a wide-ranging evaluation of fan behaviours, and as such claims to be a useful resource for those seeking to ground their research through analysing the history of fan culture. In particular, Fiske’s chapter on the ‘cultural economy’ of fandom was regarded as, if not quite prescient, then certainly forward-thinking. Twenty years ago, Fiske’s recognition that fans are essentially producers as well as consumers was highly influential (see, for example, Hills, 2013). 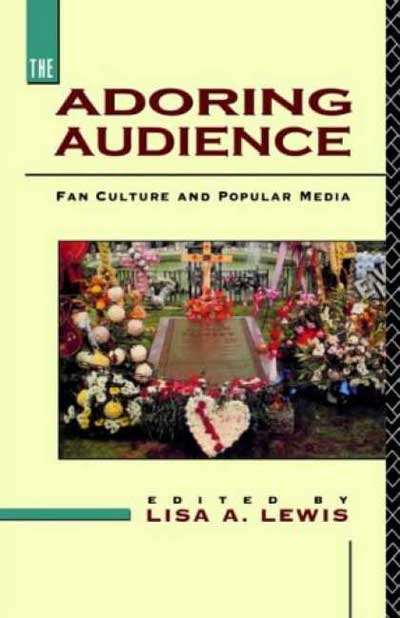 Nowadays, as Henry Jenkins (2006) has discussed in depth, we tend to take for granted that fans congregate in virtual spaces in order to engage in certain cultural practices – posting videogame walkthroughs, aggregating TV show ‘spoilers’, creating wiki databases, etc. These types of cultural practices were less visible in 1992 due to a variety of reasons, particularly the low regard fannish activities attracted, and the ‘moonlighting’ aspects of such activities, many forms of which were essentially conducted outside of the mainstream.

What The Adoring Audience does do is demonstrate how participatory activities were a feature of fan culture from its early days, and this in turn underscores just how deeply the Internet has facilitated these behaviours in more recent times. Then as now, fans prided themselves on their self-acquired knowledge and connoisseurship; Nyberg’s (1990) comic book aficionados developed their own hierarchies of writers, artists and story arcs; nowadays this kind of thing can be ranked, en masse, by looking up and contributing to websites like the Marvel Database. Fans have always sought to build their own information resources; but now, more than ever, digital technologies enable a greater aggregation of data made available to a vastly enlarged audience, which in turn is offered the opportunity to contribute to that data in a meaningful way.

Fiske also highlights the appropriation of official cultural artefacts by fans in the production of derivative texts and objects. Fan fiction and fan art have been a mainstay of fan output for several decades now (the well-known ‘Mary Sue’ phenomenon can be traced back to 1973). But in an era where different cultural forms are converging, remediation activities are increasingly visible and varied in scope, and fans are often at the forefront of such creative endeavours (take, for instance, modding, cosplay, gamics and machinima).

Adoring Audience does not merely focus on the cultural production of fans but also on the more destructive behaviours that border on the pathological. The chapters by Jenson, and Ehrenreich, Hess and Jacobs discuss fandom in terms of obsession and of “fixation on a celebrity figure” (p. 15), which, as Jenson iterates, is perhaps the most prevalent view of fans in the public consciousness. The book dedicates chapters to the extreme behaviours attributed to fans of the Beatles, Elvis Presley, Barry Manilow, etc. For example, Fred and Judy Vanmorel’s chapter presents copies of fan mail received by fan clubs over the years. Many of these missives make for uncomfortable and slightly disturbing reading, and are perhaps what has fed the idea of the socially maladjusted, pathologically-obsessed fan that has been so sensationalised by the media.

What is striking is that these behaviours are not so different even in the present day. A recent Channel 4 documentary on One Direction fans (2013) highlights exactly the same lengths that fans will go to in order to make direct contact with the objects of their desire (e.g. hotel stalking, crowd hysteria, fantasy building etc.). The major difference manifests itself in the more complex communication and organisation strategies implemented by fans in order to assist the formation of gatherings and other mass activities, which can be arranged within a mere matter of seconds thanks to social media, particularly Twitter.

It would be wrong, therefore, to say that The Adoring Audience is irrelevant; rather, it is surprising how relevant it is even when considering the great technological advances of the last 20 years. Fan nature appears to be essentially the same now as it was then; it is only the technology that has influenced the way fans express their fandom. It would be interesting to see an updated edition which, instead of focusing on the Beatles and Cagney & Lacey fans, looks at, say, One Direction and CSI fans. What would the fundamental differences be between these differing generations of fans? How would their behaviours have diverged over the decades?

After reading this book, I’m not so sure. Certainly fandom seems to have gained wider acceptance in that it has garnered far more interest and understanding from the academic community (Jamison, 2013; Voigts & Nicklas, 2013; Grossman, 2011). There are also more outlets for public expression, and a greater sense of community coherence due to the rise of social media. I would recommend this book as a seminal collection of studies of fandom from its era, and a great foregrounding in the nature of fandom. Just don’t expect anything up-to-date, and you’ll find it is a fascinating look into the fan psyche.