Graphic History: Essays on Graphic Novels and/as History (2012) is a collection of 14 unique essays, edited by scholar Richard Iadonisi, that explores a variety of complex issues within the graphic novel medium as a means of historical narration. The essays address the issues of accuracy of re-counting history, history as re-constructed, and the ethics surrounding historical narration.

Graphic History: Essays on Graphic Novels and/as History (2012) is a collection of 14 unique essays, edited by scholar Richard Iadonisi, that explores a variety of complex issues within the graphic novel medium as a means of historical narration. The essays address the issues of accuracy of re-counting history, history as re-constructed, and the ethics surrounding historical narration.

The essays range in themes and subject matter, looking at both Western and Non-Western canonical writers such as Frank Miller, Art Spiegelman, Chris Ware, Marjane Satrapi, and Yoshihiro Tatsumi, among others. Each essay acts as a single chapter and, rather than placing the essays under a collective heading that would stem from his own analysis and interpretations, which would essentially become restrictive, Iadonisi presents them instead as a sort of textual bricolage. The complex themes found in one particular essay flow to multiple others and allow the reader to move freely and draw his own comparisons and contrasts between the works presented.

Iadonisi opens Graphic History with a brief synopsis of the essays presented and his own introduction into the comic-book genre, and then moves on to begin the book with essays that focus on graphic novels that revolve around social disasters, in particular, the Holocaust and 9/11.

The two essays we first encounter look at two works by Art Spiegelman, Maus (1991), and In the Shadow of No Towers (2004). What Janice Morris sets out to prove in her essay ‘Of Mice and Men: Collaboration, Post-Memory and Working Through in Art Spiegelman’s Maus: A Survivor’s Tale, ’ is that Maus is not only a historical account of the Holocaust through a collaborative narration, but it is actually Spiegelman’s personal effort to “work through” his own place within its history as a second-generation survivor (Morris, 2012: 30). Morris’s insight explores Spiegelman’s ongoing self-battle of the creation of his identity in relation to a colossal event he has never experienced. 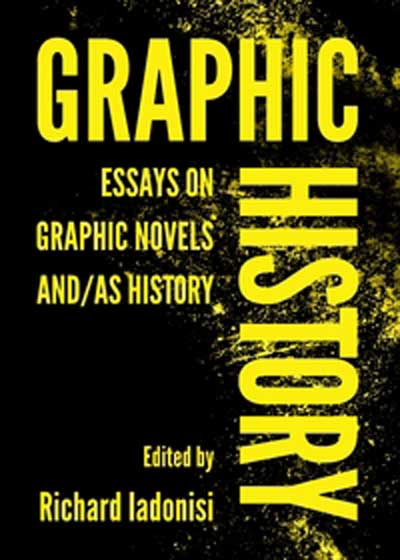 In the essay ‘Twin Turns,’ Laura Beadling examines the use of intertextuality in In the Shadow of No Towers. The images of the towers that were meant to last forever are juxtaposed with the comic characters of the past who were never meant to survive. What we see is a commentary on re-evaluating the changeability of our physical world (Beadling, 2012: 47). By incorporating essays concerning two well-known works of graphic literature and placing them at the beginning of Graphic History, Iadonisi establishes the tone for Graphic History as a removal from regarding graphic novels as merely entertainment, to a call for critical engagement with this contemporary medium.

Adonis’s own essay, ‘A Man Has Risen: Hard Bodies, Reaganism and The Dark Knight Returns’ turns a critical eye to the caped crusader. Frank Miller’s The Dark Knight Returns (1986), shows us an older, darker, cynical Batman who no longer sets out to capture criminals, but destroy them. What Iadonisi explores in his essay is that while Miller claims that the book is ‘not a presentation of a political viewpoint,’ it is in fact a reflection of the views of the Ronald Regan Era, positing Batman as the ‘hard body’ of a strong, macho, leader. Miller, as Iadonisi puts it, ‘offers Batman as the ultimate hard body aligned-intentionally or not-with Reagan values of strength, justice, conservatism, and the will of the people’ (Iadonisi, 2012: 77).

Iadonisi provides numerous examples of Batman’s hard body role, particularly when juxtaposed against the ‘ soft bodies’ of government representatives who are unable to provide the city of Gotham with leadership and action during its time of crises. It is up to Batman, a symbol of macho power, to restore order to a world bent on chaos. Yet Iadonisi makes a careful observation on the role of this particular hard body; while hard bodies are present all throughout comic-book superhero literature, the hard bodies of the 1980s symbolize national identity in the Reagan Era (Iadonisi, 2012: 86). It calls into question the role of current political systems in works of literature. Iadonisi explores how, on the one hand, The Dark Knight Returns parodies political groups, yet, despite itself, becomes unintentionally influenced by them.

While each essay can be read as a stand-alone piece, there are common threads throughout each analysis. Perhaps the most thought provoking is the theme of history as fiction. While the accountability of history is understood as based on facts, in the essays found in Graphic History we see the suggestion of approaching history as fiction. Thomas Witholt’s essay ‘By Whose Account: The League of Extraordinary Gentlemen’ and SeamusO’Malley’s ‘Speculative History, Speculative Fiction: Alan Moore’s From Hell,’ both explore how the past can only be understood as fiction.

‘By Whose Account?’ delves into how different literary characters of the Victorian Era whose literary sources have no real unity, come together to construct a historical period. The result is an impossibility to understand history through literary narratives (Witholt, 2012: 145). O’Malley’s ‘Speculative History, Speculative Fiction’ unravels how the past, in this case the story of Jack the Ripper, does not ever come to pass, but lives in the present, and comes alive with research. Each essay touches on a point that is rather startling, which is that what we come to understand about any sort of design or shape to history is more of the historians’ projections than truth itself (O’Malley, 2012: 176). It is ‘speculative fiction’ that can only answer the questions of the past (O’Malley, 2012: 178).

Perhaps the most obvious use of speculative fiction, or a construction of history, is in the graphic novel El Cosmógrafo Sebastian Caboto (1992), as explored in Barbara Uhlig’s essay ‘Narrating the Unknown: The Construction of History in El Cosmografo Sebastian Caboto.’ The mysterious life of Sebastian Caboto, where facts are few and contradictions are many, is documented in a graphic biography. The essay explores how this particular work gives as much emphasis to storytelling as documents of history as it does the historical facts.

These essays propose a very interesting approach to relaying a history that we are uncertain of through the comic-book medium. The same tale is depicted from multiple perspectives, and in fact, with each re-telling becomes a new tale altogether. Rather than solely relaying on written text, the graphic novel combines image and text in multiple frames on a single page to create a method of ‘living through’ the historical moments presented as they unfold. It is the very combination of image and storytelling that captures the ability to show complex and, often contradictory, narratives within a single volume (Uhlig, 2012: 145).

Of course, if the graphic novel is to establish itself as a means of historical narration, it must do so by employing an ethical practice of an inclusive history. The much-acclaimed Louis Riel: A Comic Strip Biography, by Chester Brown (2003) uses the graphic novel medium to tell the story of the Canadian historical figure. Samantha Cutrara argues in her essay ‘Drawn Out of History: The Representation of Women in Chester Brown’s Louis Riel: A Comic-Strip Biography,’ that Louis Riel is a story of male power and male action that does not challenge the conventional ways of understanding history (Cutrara, 2012: 124). Women are rarely depicted in the graphic novel, and the few who are embody female stereotypes. This is a severely inaccurate portrayal since Red River and Batoche were communities primarily settled through female kinship ties (Cutrara, 2012: 135).

Cutrara’s main criticism of Louis Riel is that the contemporary medium of the graphic novel is used to propagate traditional patriarchal narratives. She says, ‘it is the same story of male power and male heroics that is found in countless textbooks and dusty history tomes-the medium may have changed, but the message has stayed the same’ (Cutrara, 2012: 137). It calls into question the ethics that surround this practice of historical narration. As a contemporary medium, the graphic novel must move past the traditional patriarchal analysis of history. It should critically examine history, or, at the very least, itself be open to critical examination.

Along with rejecting the traditional patriarchal readings of history, what we find in Graphic History is a call to remove the diametrical oppositions of West versus East. Jennifer Brock examines Marjane Satrapi’s famous work Persepolis (2004), and how the work is a graphic historiography that challenges the Western perception of her countrymen as fundamentalist, fanatic terrorists (Brock, 2012: 223). One of the key things that Brock analyzes in Persepolis is the re-telling of history through memory. This is a particularly thought-provoking perception, as Brock draws attention to the fact that historical re-telling stemming from personal memories recites a history that is both authentic and biased. This essay, along with several others, takes apart the autobiography as historical narration.

Maheen Ahmeed’s work ‘Historicizing in Graphic Novels: The Welcome Subjective G(l)aze,’ presents the autobiography as subjective, and argues in fact that no truth can exist without subjectivity (Ahmeed, 2012: 188). Ahmeed references the writings of Paul de Man and Hayden V. White in order to explore the subjective construction of autobiographical truth in both traditional literature and the contemporary graphic novel medium. Then is everything we’ve come to accept as historical fact always located amidst the tension between truth and fiction? It is something Graphic History certainly seems to suggest.

The collection of essays in Graphic History offers insight into the complexities of the graphic novel as a means of visual historical narration. While Iadonisi gives a short introduction at the beginning of Graphic History, he offers no concluding words at the end of the book. Instead Graphic History ends with Roman Rosenbaum’s essay ‘The Gekiga Tradition: Towards a Graphic Rendition of History.’ Its placement as the concluding work is a strategic move, offering a proposal rather than a straightforward conclusion. The Geikga tradition can be seen as the move of graphic art into the realm of the adult world, as a select group of artists began to use the medium in the 1960s to express the social and political concerns of Japan at the time (Rosenbaum, 2012: 262).

What Rosebaum’s essay offers, is what ultimately, in their own way, each essay in Graphic History proposes. It is that we begin to view the graphic novel as a vessel that reflects the social, political and personal moments of our history. If we can accept the graphic novel as a significant source when researching the past, then perhaps it will find its place as a critical mode of historical narration in the contemporary and the coming future.