This article reviews Laurence Grove's Comics in French. The European Bande Dessinée in Context (2010; 2013). The review argues that this book can be seen as a handbook, or almost as an encyclopaedic introduction to be consulted in small parts as and when needed. The review suggests that for the reader new to French BD, this is an invaluable resource.

The book is divided into three sections. Part I addresses the formal features and the development of the bande dessinée (BD), covering key features such as word/image interrelation, lay out and visual language, what panels, speech bubbles and gutters are. This is interesting when explained in the context of narrative theory and film but the scope is very much introductory and does not add to existing work by McCloud (1994) or others.

I also found the insistence on using French terms for panel, speech bubble etc. rather annoying – they do not add to the discussion, especially as usage in the rest of the book inconsistently moves back and forth between using French and English terms, and Grove does not establish a convincing rationale for the necessity of the French terminology. With its informal, reader-oriented style, much of this section reads as if it is aimed at an undergraduate student of French.

Part I concludes with a detailed analysis of Astérix gladiateur (1964), aimed at demonstrating how a BD works by applying the formal terms and techniques previously introduced. It also locates BD in relation to film and the novel, showing how the BD uses formal innovation similar to the nouvelle vague’s fragmented and experimental narrative structure and film’s points of view, perspectives, camera angles and shots. Here Grove successfully argues for the BD’s artistic merit, even before it emerges ‘as a self-aware form’ (Grove 2013: 51) in the 1960s and 1970s.

Part II takes a chronological approach focusing very much on the cultural context of each period (pre-history, nineteenth and twentieth century) by showing how the BD grows out of and engages with this environment rather than being the product of individual innovators or inventors. Like other books on comics or multimodal texts, Grove’s pre-history begins with the Bayeux Tapestry but his argument for an existing culture of the image takes in illuminated manuscripts, emblem books and picture books and draws ‘a rich history of text/image interaction’ (Grove 2013: 88) which was increasingly fostered by the development of printing. His analysis of illuminations or of emblems is insightful and a convincing addition to the received history of comic precursor narrative. 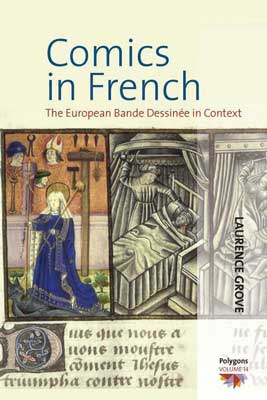 His discussion of the nineteenth century is intent on further developing a counter-history with a rather insistent argument against prevailing views of Rodolphe Töpffer as the inventor of a new genre. In this section, Grove aims at demonstrating a new mindset: ‘the new era of the image’ (Grove 2013: 110) made possible by technological developments, the emergence of film, photography and illustrated journals and a more sophisticated visual, or graphic, language.

For the twentieth century, Grove chooses a series of defining moments, charting the rise of early BD (including TIntin), setbacks in Nazi-occupied and post-war France and Belgium and the final rise from the 1960s into a self-aware art form and the cultural recognition of BD as ‘the Ninth Art’.

There is much interesting material in this section: for example, the detailed discussion of the innovative role of the Journal de Mickey (1934) in redefining the BD and making it a commercial success allowing for artistic growth and innovation; a nuanced consideration of the ideological slant in collaborative journals such as Le Téméraire (1943–1944) while acknowledging their artistic verve, or the impact of censorship laws in 1949 preventing imported texts for children and creating a space which allowed for the creation of BD as a distinctive French art form. The chronological section in part II concludes with an encyclopaedia-like presentation of contemporary BD, its ‘innovators, best-sellers and prize-winners’ (Grove 2013: vii) which gives a short description of the artist and the work, assesses it in the context of BD as art and / or commercial product and considers its critical reception.

These chapters are far more academic in tone and provide an excellent overview of critical reception and critical readings of comics, concluding with a number of case studies (including the ‘Spirit of 007’). Grove is concerned with establishing the validity of BD as worthy of academic attention (and research funding) and points out the paradoxically high critical and cultural status of BD in France but its non-recognition within French academe, while comics in the Anglophone world enjoy a less elite status artistically or culturally but are far more established in research terms. Grove concludes by considering issues such as underground BD, postcolonial issues and gender, reviewing the literature on it and pointing to directions of future research.

The book is meticulously researched, documented and referenced with an at times overwhelming critical body of endnotes, critical contextualisation, recommendations for further reading and an extensive bibliography of primary and secondary texts. While there is much that is new and hugely interesting, the book also covers established ground while intent on arguing throughout for an innovative or counter-historical perspective. This insistence can be at times somewhat tiring for the reader, especially when points are made repeatedly.

The style varies considerably from very informal to very academic and at times turgid. The mass of detail, of books referenced, discussed and acknowledged, often with several French titles (each followed by an English gloss), makes for laborious reading. However, once I started thinking about this book as a handbook, or almost as an encyclopaedic introduction to be consulted in small parts as and when needed, I started appreciating the depth, scope and breadth of material covered more.

I am not sure to what extent BD aficionados will find substantially new information, but for the reader new to French BD, this is an invaluable resource. I will order it for my library.