Research exploring the multimodal characteristics of comics has recently flourished, and Dale Jacobs has been one of the early prolific authors on this topic. Jacobs expands these ideas further in Graphic Encounters: Comics and the Sponsorship of Multimodal Literacy, a monograph which engages with theories of multimodality, but shifts its focus primarily to literacy sponsorship.

Humphrey, A., (2014) “Alternative modalities – A Review of Graphic Encounters: Comics and the Sponsorship of Multimodal Literacy”, The Comics Grid: Journal of Comics Scholarship 4(1), Art. 3. doi: https://doi.org/10.5334/cg.am

The past decade has seen the concept of multimodal literacies increasingly embraced by both educators and comics scholars. Within education, questions of multimodal literacy are often intertwined with digital technologies and ‘new media.’ The National Council of Teachers of English issued a Position Statement on Multimodal Literacies in 2005, which addresses issues related to electronic resources, but also notes that an exclusive emphasis on digital literacies ‘would limit students’ access to other modes of expression,’ and highlights that the ‘interplay of meaning-making systems’ is not exclusive to electronic media (NCTE 2005).

Comics are an obvious example of texts which thrive on this interplay, incorporating visual, spatial and linguistic meaning. Research exploring the multimodal characteristics of comics has recently flourished (Schwartz and Rubinstein-Ãvila 2006; Carter 2007; Frey and Fisher 2008; Duffy 2009; Hammond 2009; Connors 2013; Leber-Cook and Cook 2013; Scanlon 2013; Borodo 2014).

Dale Jacobs has been one of the early prolific authors on this topic, publishing three articles about comics and multimodality between 2007 and 2008 (Jacobs 2007; Jacobs 2007a; Jacobs 2008). He expands these ideas further in Graphic Encounters: Comics and the Sponsorship of Multimodal Literacy (Jacobs 2013) Figure 1, a monograph which engages with theories of multimodality, but shifts its focus primarily to literacy sponsorship. 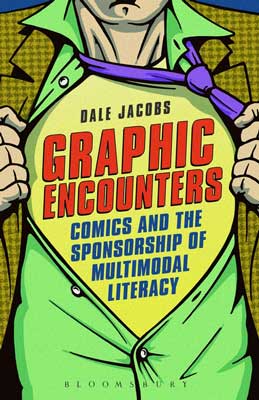 From the outset, Jacobs draws a distinction between traditional, text-based, ‘alphabetic’ literacy, and the more multifaceted, multimodal literacy sponsored in comic books. This binary classification of multimodal literacy and alphabetic literacy at first seems problematic, since as Gunther Kress notes, ‘all texts have always been multimodal,’ even the most didactic textbooks (Kress 1996). However, Jacobs acknowledges that our ideas about what literacy means are learned social constructs, with multimodal literacy being a relatively recent development. His interest is not so much the difference between alphabetic and multimodal texts, but the role comics have played in shifting this conception.

Jacobs applies the work of Kress and the New London Group to describe the multimodality of comics, adopting their concept of Design, in which meanings are constructed through the various design elements of ‘Linguistic Meanings, Visual Meaning, Audio Meaning, Gestural Meaning, Spatial Meaning and the Multimodal patterns of meaning that relate the first five modes of meaning to each other’ (Cope and Kalantzis 2000). His attempts to ascribe each and every one of these modes of meaning to comics sometimes seem to overreach, such as his classification of word balloons as Audio Meaning, when they seem to naturally fall under Visual and Linguistic Meaning (Jacobs 2013: 14), but overall his application of the New London Group’s work to the context of comics is otherwise nicely applied, and expands the growing body of work about the semiotics of comics (including Magnussen 2000; Groensteen 2007; Cohn 2013).

These theories are laid out in the first chapter and are woven throughout the rest of the monograph, however, for most of Graphic Encounters Jacobs focuses less on how texts produce meaning, and more on how social, cultural and economic relationships produce literacy. His main theoretical lens is that of literacy sponsorship, a conceptual approach developed by Deborah Brandt as a way of connecting ‘literacy as an individual development to literacy as an economic development’ (Brandt 1998). This approach helpfully places the cultivation of literacy within a discourse of power, hegemony and economic control, as Brandt notes ‘literacy learning throughout history has always required permission, assistance, coercion, or, at minimum, contact with existing trade routes.’ She defines literacy sponsors, rather broadly, as ‘any agents, local or distant, concrete or abstract, who enable, support, teach, model, as well as recruit, suppress, or withhold literacy – and gain advantage of it in some way’ (Brandt 1998).

Graphic Encounters applies this broad theoretical framework to a series of discrete historical examples. Except for a final chapter about the acceptance of graphic novels into libraries, Jacobs mostly focuses on North American comic books published between the 1930s and 1980s. Although this is well-trod territory, with super heroes and Fredric Wertham’s critiques looming large, Jacobs’ approach yields unique observations.

To take one example, his take on Marvel and DC critiques their respective developments of ‘shared universes’ of superheroes as a way of enticing readers to become literate about those universes by purchasing more comic books, a tactic which Hollywood has recently adopted in its cinematic adaptations of those comics. Elsewhere, Jacobs examines Wertham’s claims about children’s ‘avidity’ for comics leading them away from supposedly wholesome books, linking Seduction of the Innocent with the sponsorship of literacy (Wertham 1953).

Although Jacobs’ tight focus on North American comic books gives Graphic Encounters cohesion, it at times weaken his arguments. By claiming that comics began in the 1930s, he ignores several decades of comics strip literacies sponsored by newspaper publishers, and overlooks the fact that the generation which produced the 1930s comic book artists had grown up reading newspaper comics, and were already literate in the form. Jacobs provides an interesting discussion of how comic books remediated the forms and flavors of pulp magazines, but a similar consideration of how comic books remediated aspects of newspaper strips would have strengthened the piece.

These omissions ultimately do not derail Jacobs’ arguments, since Graphic Encounters’ does not attempt to trace multimodal literacy sponsorship as a historical development. Instead, Jacobs examines a series of historical/cultural moments when comic book publishers have sponsored a kind of meaning-making which at times seemed to be opposition to the traditional arbiters of literacy, and at times in concert with them.

Thus, D.C.’s creation in 1941 of an Editorial Advisory Board comprised of respected educators is seen as an attempt by the publisher to align itself with established traditions of literacy in the wake of parental concerns about whether comic books should really be sponsoring children’s meaning-making. Conversely, the crime and horror comics that Wertham railed against in the 1950s are described as promoting a literacy that critiqued and parodied established norms about class, family, and authority. Jacobs describes the acquisition of literacy as involving ‘taking on ways of making meaning in the world’ (Jacobs 2013: 115), and at the heart of these sections is the sponsorship by comics of alternative, rather than strictly multimodal, ways of making meaning.

In addition to these takes on familiar topics, Jacobs ventures off the beaten track for intriguing extended discussions on more obscure comics from the period. One chapter examines evangelical Christian comic books, including series published by the televangelist Oral Roberts, and comics drawn by Archie artist Al Hartley for Spire Comics. The latter featured, rather bizarrely, Archie and his friends sponsoring explicitly religious messages. Another chapter describes the crossover between a special series of Spider-Man comic books and the Children’s Television Workshop program ‘The Electric Company’, which was designed to promote childhood literacy.

Presented as a series of case studies which in Jacobs’ words are ‘not intended to come together in a neat conclusion, but instead are offered as points of entry’ (Jacobs 2013: 211), Graphic Encounters reads less like an extended argument, and more like a group of linked vignettes. Although this means the monograph lacks a sense of ‘build,’ the benefit is that individual chapters might easily be excerpted for use in an undergraduate course.

Throughout Graphic Encounters, Jacobs explores how comics have changed and challenged cultural norms about what literacy is, and what it can be. By building upon contemporary changing attitudes about literacies and multimodality, Jacobs presents a direction of inquiry directed at the role comics have played in the development of literacy, a field of study which deservers further attention.

N Cohn, (2013).  The Visual Language of Comics: Introduction to the Structure and Cognition of Sequential Images. London: Bloomsbury.

A Magnussen, (2000). The Semiotics of C. S. Peirce as a Theoretical Framework for the Understanding of Comics In:  A. Magnussen, H.-C. Christiansen,   Comics and Culture: Analytical and Theoretical Approaches to Comics. Copenhagen: Museum Tusculanum, pp. 193.