This note presents a diagram of a collaborative project about the comic book series Planetary (1998–2009). It introduces the image by arguing that such a diagram makes it possible to visualize the complexity of relationships between the various academic institutions underpinning the original research project.

In June 2013, I was invited to give a talk at a conference organized in Montpellier on the subject of intericonicity and the circulation of images (Labarre 2013).

Intericonicity is a concept derived from Gérard Genette’s notion of intertextuality, applying it specifically to images. It refers to the presence of an image within another image, and the conference called for studies of the mobility, plasticity and historicity of these images. I seized this opportunity to finally write about Planetary, a series of comics by Warren Ellis, John Cassaday and Laura DePuy-Martin (Ellis et al. 1998–2009) which I had enjoyed and admired but had not had the opportunity to study closely.

While looking for references on the subject, I stumbled upon the work of Laura Perna and Errol Rivera two researchers who had previously given a joint unpublished presentation about the series and posted a summary of their talk online (Perna and Rivera 2009). They were kind enough to provide me with their notes, which proved invaluable in defining the way Planetary fit into theories of post-modern literature. The material made it possible for me to cover new ground during the talk instead of retreading the path they had taken.

When the organizer of the intericonicity conference offered the opportunity to revise and publish my talk, Laura, Errol and I decided to work together on a common text, which would reintegrate some of their findings in the structure of what had been my presentation. Once we were done, it struck me that this collaboration, which had felt simple in its execution, relied on an extraordinary system of new and old academic institutions as well as on a few remarkable tools; those include the shared Google hangout we used to have our first and only synchronous conversation at the end of the project, with one of us in Texas, another in Britain and the last in France.

I then sought to reconstruct that network and organize it in a way that would reveal both its complexity and its elegance, the better to highlight the discreet structures which underpin the work of contemporary researchers. There were of course many possible spatial organizations for such a representation. An alternative representation of the same project could have been structured around the elements I tried to color-code in the diagram, emphasizing institutional interactions rather than chronology.

The one I settled upon emphasizes chronology to a large extent, with a downward movement in the page (Fig. 1). That movement mirrors the way I think about this project, as a trajectory from the original work to our analysis thereof. I enjoyed the fact that such a disposition also demonstrated the role of archives, the moments when research is about going back to what already exists instead of simply moving forward. 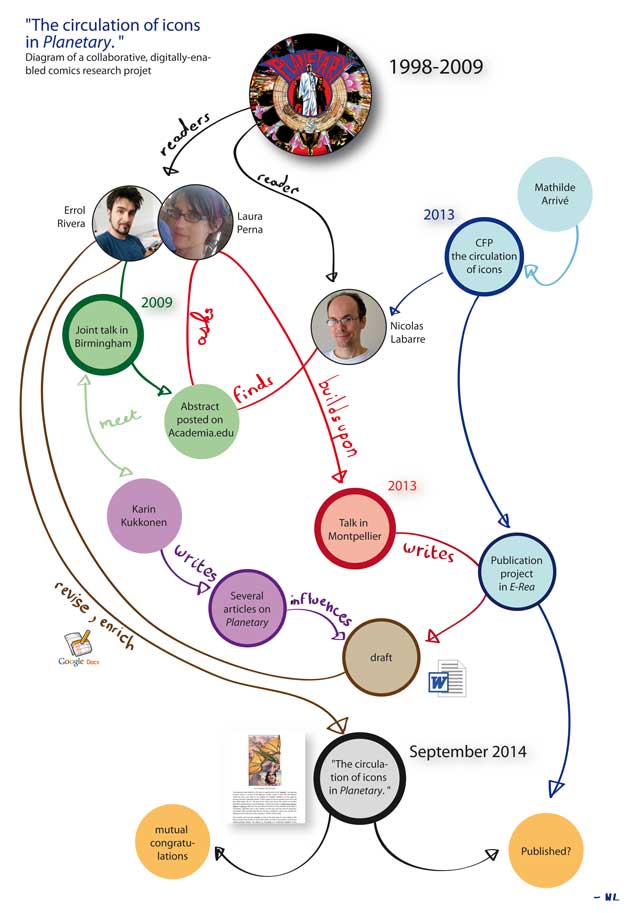 The Circulation of Icons in Planetary. Diagram of a Collaborative, Digitally-enabled Research Project, by Nicolas Labarre.