Bart Beaty offers a unique and compelling foray into the study of Archie comics that should provoke further study. 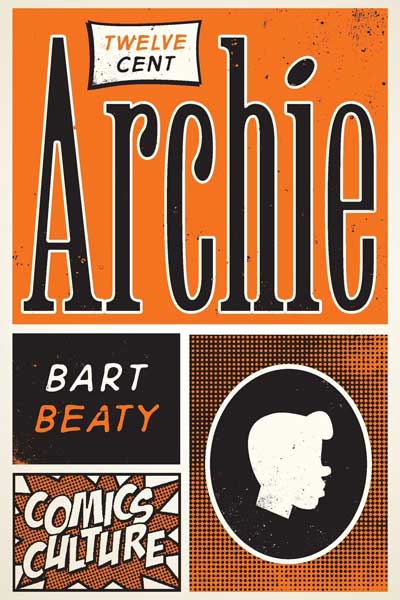 I have loved Archie comics since, conservatively estimating, 1990. As grocery store staples, they were the only comics available in my tiny Canadian hometown and, alongside my Beano subscription lovingly provided by my Nan and my treasured Marvel superhero trading cards largely pilfered from my brother, Archie was the centre of my comics life well into my teen years. I rooted for Betty, booed Veronica, laughed at Jughead, and harboured something of a strange crush on Archie himself. They were fictional friends who were utterly reliable, and I have kept tabs on them ever since, following along as Riverdale welcomed its first gay characters, married off and then killed off Archie, and entered into the zombie era. Indeed, the last five or ten years have been arguably the most interesting time to be a fan of Archie comics, with new fans joining the ranks all the time.

It is good timing for a scholarly study of Archie, then, and I am poised to be a very happy reviewer of Bart Beaty’s Twelve-Cent Archie (2014), part of the Comics Culture series from Rutgers University Press. I agree with Beaty’s central premise that we must talk about popular comics if we are to talk about comics at all, and a book-length study of Archie is certainly overdue. Beaty’s study is a close reading of every Archie Comics comic published from December 1961 to July 1969, the seven-and-a-half year period that Archie’s adventures could be purchased for twelve cents (US, obviously). Beaty is particularly interested in the contributions of artists Harry Lucey, Dan DeCarlo, and Samm Schwartz and writer Frank Doyle, and this era of comics is the one in which these giants overlapped. While Beaty justifies his scope and provides lively readings of the comics he so deeply engages with, I found myself wishing for a broader historical perspective on Archie that might include such fascinating periods of its history as the Fundamentalist Christian version of Archie produced starting in 1972, or a more thorough engagement with the modern Archie comics tackling issues like gay marriage and gun violence. Twelve-Cent Archie made me want a more comprehensive history about the gang from Riverdale.

The form of Twelve-Cent Archie is itself as charming as an Archie comic. Beaty has divided the work into one hundred bite-sized chapters that can be read in any sequence; in much the same way as we read an Archie Double Digest by popping in and out and looking for the characters and themes most likely to engage us (as a child, I read all the kissing scenes first), so we can read Twelve-Cent Archie. Each chapter can exist independently (and indeed, Beaty has published some chapters in popular press publications like Canada’s Walrus magazine1) and, like Beaty’s larger argument about how Riverdale functions, one need not be too concerned about continuity. It is a conceit undesireable in Archie comics and unnecessary to Twelve-Cent Archie. This strategy has both risks and rewards. The segments themselves are immensely readable and even pleasurable, and the structure makes the book possibly the least intimidating work of comics scholarship ever. Using the form of the book to celebrate the lack of continuity in Archie comics forces readers out of the reflexive desire to privilege the literary in comics. But the downside of this format is that just as we as readers might often feel like we never get to truly know Archie and the gang – because, as Beaty notes, the “emptiness of the Archie characters” is their defining characteristic (88) – I was left disappointed at the lack of sustained engagement with some of the ideas presented in this vignette form. While the length of each segment is just right for the portion devoted to Betty’s ponytail, for example, I wanted more engagement with race and the wilful blindness of Archie in this era to the civil rights movement happening around it. Likewise, the discussions of gender politics and commercialism left me wanting more. As much as anything, though, Beaty offers a roadmap in Twelve-Cent Archie of where comics scholarship can productively head next with Archie.

Twelve-Cent Archie is a clear and thoughtful engagement with the importance of popularity. Beaty is correct that “the exclusion of the genuinely popular” – a trait he ascribes to the predominance of literary scholars in comics studies and their (our, she admitted sheepishly) privileging of auteurship – “has obscured the actual history of the field” of comics studies (5). This, of course, is not uncommon: film scholars do not shed a lot of ink on popcorn flicks, for example. But it does render the body of comics scholarship patchy at best. In offering a close reading of 900 Archie issues, Beaty is able to attend to the comics as they are and explore them from a range of perspectives. As noted, Beaty engages with diversity issues, observing the unbearable whiteness of being in Riverdale that allows Archie comics to “wilfully ignor[e] the social transformation taking place around them” in the 1960s (52), and meditates on the gender politics of the Veronica-Archie-Betty love triangle while making a convincing case not only that Riverdale is “a highly patriarchal culture” but that there is no love triangle at all, with Betty merely an interloper on what is an otherwise “a long-term relationship with Veronica” (196, 38). These observations are astute and sometimes force a reconsideration of the Archie franchise altogether, at least as far as the twelve-cent period is concerned.

The back of the book frames Twelve-Cent Archie as “the first scholarly study of the Archie comic,” and Beaty notes that “academics have found little to say on the subject to date” (4). It is true that traditional scholarship has been as reticent to engage with Archie as, it must be acknowledged, it tends to be about a lot of wildly successful but critically derided work; a literature search in a database like the literary MLA largely confirms Beaty’s claim, with a few exceptions. That said, Beaty’s definition of existing scholarship is limited. He neglects to acknowledge the body of educational scholarship on the use of Archie comics in literacy development and the understanding of gender norms (Bonny Norton’s work at the University of British Columbia, for example), and his scope for comics scholarship is limited to traditional outlets, which misses much of the interesting work and lively debates in the comics scholarship blogosphere (and I shall not unsubtly direct the reader to Graphixia2, where your reviewer has offered some discussions of Archie over the years). I raise this point not to fault Beaty but to recognize that as a discipline that has so recently struggled to find a place to be heard, we must not neglect a survey of the online discussion of comics: from established sites like The Comics Journal to Jeet Heer’s Storified essays about comics3, our scholarship is collectively strengthened by the inclusion of thoughtful but non-traditionally “scholarly” sources, especially when the subject is something as pop-accessible as Archie comics. I cling to the idea that comics scholarship should be an interdisciplinary space of inclusive discussion about an accessible art form, and if we are to talk about the popular in comics it is worth including the popular discourse as well.

Regardless of this criticism, Twelve-Cent Archie is significant for being the first full-length and traditional foray into critical engagement with Archie comics, a project that is essential given the vast scope of the source material. What is frustrating for the willing comics scholar reading Twelve-Cent Archie, however, is that it does not function as an entrée into Archie scholarship, because Beaty neglects to reveal his scholarly apparatus. If Archie is “an atypical comic book protagonist” who is “not particularly generative” (16, 18), then Twelve-Cent Archie borders on being an atypical scholarly work that is also not particularly generative. In the interests, presumably, of readability and engagement, Beaty has chosen not to reference any of the historical context, sales figures, cultural background, knowledge of business practices and process, or other framing material in the book; the only citations present are to the comics themselves. While this no doubt makes Twelve-Cent Archie accessible and readable for the fan or fan-critic, it does not offer groundwork for future development of scholarship on Archie comics. Obviously, covering a seven-and-a-half year period of such a cultural juggernaut, this cannot be the definitive book, but Beaty misses an opportunity to be a resource for the scholars who wish to build on his work – there is no way to dig into his observations about female audience share, for example, and offer an alternative reading, because there is no source offered for that information. Here accessibility has trumped an opportunity to build a scholarly community, and give Beaty’s own assertion of the need for more scholarly engagement with these comics, that is unfortunate.

In some ways, this is reminiscent of Beaty’s work on Canadian superheroes: he makes assertions, raises interest, but ultimately tills the soil for other scholars to farm. I have been a beneficiary of Beaty’s seminal work in this area, and much credit to the way we think about nationalist superheroes in a Canadian context is certainly due to him and the work his work has sparked. Beaty is exceptionally good at raising questions for other scholars to pursue, but I would have liked him to leave more of a trail of breadcrumbs – in the form, at least, of a reference list that can be plumbed and interrogated – than he has chosen to offer with this volume.

Overall, Twelve-Cent Archie is engaging and readable, funny and thoughtful, and worthwhile for fan and scholar alike. Beaty successful demonstrates that there is much worthy of discussion in Archie comics and, perhaps more importantly, much work left to be done. This is not a comprehensive study of Archie, nor does it profess to be. It will leave a curious reader thinking about Archie and his pals in new and useful ways, and will hopefully spur more discussion, engagement, and scholarship. Bart Beaty has, I hope, challenged readers to reject the existing assumptions about popular comics in favour of a more nuanced, and therefore more fruitful, approach. I look forward to seeing the next generation of comics scholarship it engenders.