Since the publication of the Budapest Open Access Initiative statement in 2002, Open Access has grown from an ideal to a reality. Open Access and the Humanities explores scholarly practices, communications, and cultures in light of this change and argues that humanists can and should retake responsibility for how they chose to publish.

Baker, J., (2015) “Retaking Responsibility for How We Communicate. A Review of Open Access and the Humanities: Contexts, Controversies and the Future”, The Comics Grid: Journal of Comics Scholarship 5(1), Art. 2. doi: https://doi.org/10.5334/cg.az

Since the publication of the Budapest Open Access Initiative statement in 2002, Open Access (hereafter OA) has grown from an ideal to a reality. Today many academics publish their research free at point of access under generous reuse permissions. Over the coming years, many more will publish OA as both practices change and OA mandates issued on disciplinary, funder, or national lines gain traction.

It is in this context that Cambridge University Press have published Martin Eve’s Open Access and the Humanities: Contexts, Controversies and the Future. That a commercial publisher have chosen to publish an OA monograph on and in support of OA may surprise some readers. However – as emerges over the pages that follow – Open Access and the Humanities is no dogmatic anti-capitalist, anti-market, anti-publisher panegyric but rather, as Eve notes early on, a book written by an author who believes that ‘that the amplificatory power of good presses is real and that through this route this book will reach readers who would otherwise remain in the dark’ (6). Presses in short, still matter. And this sets the tone of Eve’s timely, critical, and important monograph. 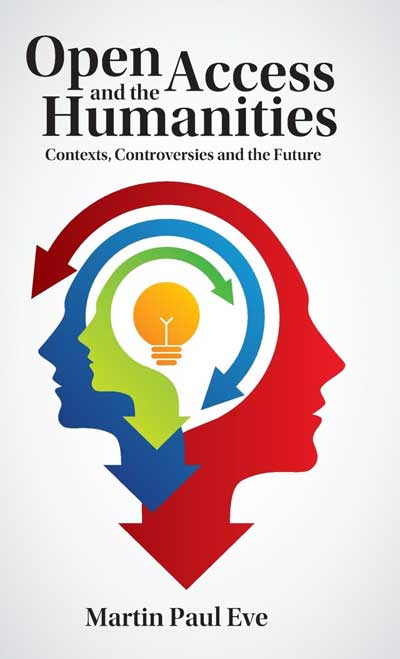 Before proceeding any further, some caveats from me. I know Eve (or Martin as I prefer to address him as). I agree with the principles of the OA movement as defined by Peter Suber, the principal drafter of the aforementioned Budapest Open Access Initiative. I support the Open Library of Humanities, an open access publication platform Eve founded with Caroline Edwards, and am directly involved in two Open Access journals. I champion the benefits to scholarship of open data, open archives, open software, and open research practice. I have been employed as an OA champion in a Higher Education setting. I have written with Martin (Collins et al, 2013) on the topic of OA. And I work for an institution that is both experimenting with future directions for academic publishing and believes that publicly funded research should be free to the public at point of access.

Open Access and the Humanities proceeds in five parts. The introductory chapter describes what OA is (including a welcome glossary of key terms) and the historical contexts pertinent to any discussion of OA (among them the free culture and software movements, the web, library budgets and the ‘serials crisis’, and the impetus for OA in fast moving research fields such as high-energy physics). Key areas of debate and controversy are also covered, including lengthy and fair treatment of arguments against OA that have emerged from academics (in particular humanities academics). Chapter Two, entitled ‘Digital Economics’ covers the systems of cultural and symbolic capital that underpin academic publishing, the affordability of OA in the humanities (including inevitable discussion of Article Processing Charges, hereafter APCs), scholarly publications as commodities, and the challenge of coordinated, international policy implementation. Chapter Three examines open licensing, beginning with what open licensing is and the suite of Creative Commons (hereafter CC) licences preferred by both funders of academic research and by many galleries, library, archives, and museums. The chapter moves on to look at how applying these licences to academic publications may benefit both long-standing and emergent practices in the academe, concerns raised by the possibility of reuse under CC terms, and challenges that exist around implementation. One of these challenges is the range of research outputs in the humanities as compared to many scientific disciplines, and Chapter Four covers that form dearest to most humanists’ hearts: the monograph.

After providing a critical discussion of why monographs are different, what they aim to do, and how they are made, Eve offers examples of OA monograph projects and potential economic models for OA monographs, including a call for scholars to not accept Book Processing Charges (hereafter BPCs) as a fait accompli and to engage in much needed experimentation with the form. The theme of experimentation is developed in Chapter Five, entitled ‘Innovations’. Whilst keen to stress that the OA movement is about nothing more than achieving free and unrestricted access to academic publications, Eve argues – as indeed have many who champion OA – that the move to OA behoves the academic community to reflect on its publishing practices and to open up a space to rethink academic publishing, in particular peer review and how value is ascribed, gained, and transferred through scholarly communications. In this vein, the chapter includes suggestions for how publication can be judiciously accelerated, for restoring the editor function through the post-publication collection and curation of articles, and for reforming peer review.

In, between, and straddling across these chapters are a combination of novel and distinctive arguments and observations, as well as established arguments repacked, reiterated, and reaffirmed. Together these elevate Open Access and the Humanities from a state-of-play summary to an important work of introspection and critical reflection. In no particular order and summarised so as to encourage readers to follow up on each themselves, these include:

OA is simple in theory but messy and contentious in real-world implementation (3, 7–8, passim).

The academic economic model of publishing does not need to look like the publishing industry. Rather the self-reflection and critical perspective characteristic of the humanities must be brought to bear upon existing model so as 1) to situate academic publishing in historical, social, cultural, institutional, and professional contexts, and 2) to create a culture whereby academics take responsibility for the repercussions of how we have chosen and continue to choose to publish. Funders, policy makers, and publishers can all benefit from this critical reflection, a reflection that must not cease as OA is implemented. For example, the drift (in the UK context at least) towards undifferentiated APCs and BPCs quickly looks problematic when placed under scrutiny for, as Eve puts it, giving ‘the impression of a black box into which money is thrown and out of which comes a product and sometimes profits, with insufficient justification to ‘clients’ for the resources’ (2, 15, 18, 21, 37, 43; quote 72).

OA is messy and contentious in real-world implementation not only because of economics but also because of the value ascribed to scholarly communication by their authors and by their academic peers. This reflection opens up a myriad of unresolved problems, many of which a critical deployment of OA foregrounds:

The monograph situation at present is complex and that complexity is deepened by OA. And yet it does not follow that OA is the enemy for the system has long been broken. As Eve eloquently puts it: ‘The panic over the potential limitation of monograph publication in the switch to a supply-side economy (in which it is feared that one may not be able to publish because of the high cost borne by the institution publishing) is to some extent only an unravelling of the simultaneous crises of supply and demand in the scholarly publication market’ (136).

The argument that the implementation of APCs damages academic freedom is questionable, not least because, as Eve writes, ‘journals and presses are allowed to reject academic work on grounds of quality (for both journals and books) and marketability (usually only for books), aspects that are not explicitly mentioned in these statements on academic freedom but which already limit the ability to publish wherever one would like.’ (61).

OA is not anti-market. Academic publishing, profit making or otherwise, requires labour and costs money. Champions of OA have never denied this (29, 67).

As for omissions, there are few of note. I would like to have seen more on the clash and/or synergy between common uses of the phrase ‘open access’ and ‘Open Access’ as academic nomenclature. In a recent London Review of Books piece by Charles Hope on the Warburg Institute (Hope, 2014), for example, ‘open access’ is used to refer to library shelves stocked with books that are open to access (as opposed to ‘closed access’ books that must be requested). Perhaps then in the same way that Eve demystifies OA sub-jargon – ‘Green’, ‘Gold’, ‘Hybrid’ and the like – for the benefit of the academic reader, Open Access and the Humanities might have benefited from having stressed that ‘Open Access’ is jargon that requires explanation and demystification by academics as it plays out in the public sphere, an arena that is – after all – the supposed primary beneficiaries of OA. Elsewhere, Chapter Five would be enriched by examination of not only OA/academic led innovations in the field of scholarly communication but the impact to scholarly communications from non-traditional publishing innovations external to the academe, from publications that are video, audio, runnable code, or interactive environments – potential academic publication forms whose relationship to an OA driven scholarly landscape may be complex (like those existing but less common scholarly outputs such as poetry and performance) particularly as/if they grew in volume.