The WWII historian Jeffrey K. Johnson studies how the two comic book legends Superman and Batman have adapted successfully to American cultural and social landscapes through time. This is a book review of ‘Superheroes in Crisis’, a monograph that details some decisive moments from their creation in the late 30’s up to the 70’s in which both characters have transformed in order to maintain their relevance as what Johnson calls ‘cultural barometers’

The idea that superhero comic books are part of a modern American mythology is probably not a surprise to anyone. However, Jeffrey Johnson refocuses this concept in his monograph Superheroes in Crisis (RIT Press, 2014): after going into detail of the myriad of changes Superman and Batman have gone to stay relevant, he suggests we should narrow our assumptions of what constitutes a true comic book myth, given that the character stays true to what the present society demands. ‘American culture is littered with faint remembrances of characters who flourished for a season and then became inconsequential and vanished’ (Johnson 2014: 104). The author mentions The Yellow Kid and Captain Marvel as those characters who were once über famous and popular and now are but receding memories in people’s minds. Avid comic readers can surely think of many other examples of great modern characters who, for some reason, just didn’t make it. Batman and Superman, however, remain ‘two heroes who have survived, and often thrived, for over seventy years because they are important to current Americans and speak to modern social problems and contemporary cultural necessities’ (Johnson 2014: 104). 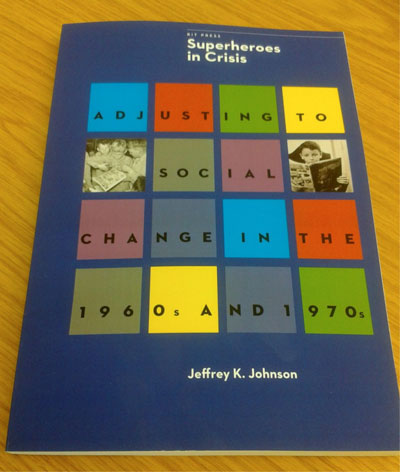 A noted World War II historian, Johnson points out that the characters have endured the trials of time mainly because of their abilities to bend so as not to break. Even if most of us modern readers assume fixed traits for both The Dark Knight and The Man of Steel, Johnson carefully demonstrates there’s no such thing: Superman couldn’t even fly in his earliest adventures, and through the period of the TV series in the mid-sixties, Batman, the so-called Dark Knight, was a goofy, campy character with not a bit of darkness in his soul. Through Johnson’s account it is evident, though, that Batman and his creators have done a better job than Superman’s in adjusting to radical changes in American society (such as the US’s disillusionment after JFK’s assassination or the introduction of TV and its immediate popularity). This might also be the reason for Batman’s smoother translation to modern cinema: since the release of the first movie —Batman (Burton, 1989)— has always kept the public interest with strong sales figures, —The Dark Knight (Nolan, 2008) being the most popular to date, having made 533 million dollars in revenue for its creators in the US alone —. Not even the bad Batman movies have flopped in opening weekends: people always want to see The Dark Knight’s new metamorphosis, as if they wanted to understand what they’ve turned into.

In the four chapters of the book, Johnson provides the reader with the rare pleasure of being told old stories, gems actually: instead of just sociological analysis and high ideas, Johnson provides the actual plot of the comic issue he chooses in order to support his commentary. We might remember that Superman was created during the Great Depression (1938), and it’s fairly easy to assume that the caped hero was to provide a temporary escape for impoverished and desperate Americans, but unless we have an infinite (and expensive) golden age collection, it would probably never occur to us that during his first few years, Superman was actually a savior of the oppressed, almost in a Marxist fashion. One example is Action Comics #3, where Superman disguises himself as a coal miner to trap the mine owner and his socialite friends underground in order to show them the importance of safety regulations and working men. In Action Comics #8, Superman befriends a gang of delinquents and decides to burn down the slums they live in, just to prove that the government is partly responsible for their delinquency. In the end, Superman becomes a true hero: he forces the government to build new apartments providing these hooligans the dignity they deserve. Throughout the book, Johnson provides such examples in effective ways to prove the Historic turmoil to which our heroes reacted.

One compelling topic that defines both characters concerns their enemies. At first, being created as depression-era social avengers, they fight the common criminal: shoplifters, wife-beaters and even politicians. ‘These often colorful foes provided action and adventure while also creating a binary narrative of good and evil’ (Johnson 2014, XIV). But this narrative changes greatly throughout time, constituting probably the most important transformation in the stories of these two heroes: the evolution of their foes. At some point, the duality of pure good and evil stops being good enough. It stops explaining what is wrong with the world. At the end of the sixties, for example, Superman’s petty villains become so unimportant that, for a while, his love interest Lois Lane impersonates a new kind of foe. In a way, Lois updates better than Superman as she wakes up to her newfound power, akin to the zeitgeist of her era. In Lois Lane #85 (she even gets her own title for little while) the one-time docile girlfriend decides she no longer wants to marry Superman and refuses his once longed-for offer. In a kind of confused, first approach feminism, she is seen doing things such as lifting heavy stuff like men. ‘Superman represents the older generations and is pressing to protect the status quo, while Lois is a change-minded baby boomer’ (Johnson 2014: 43). 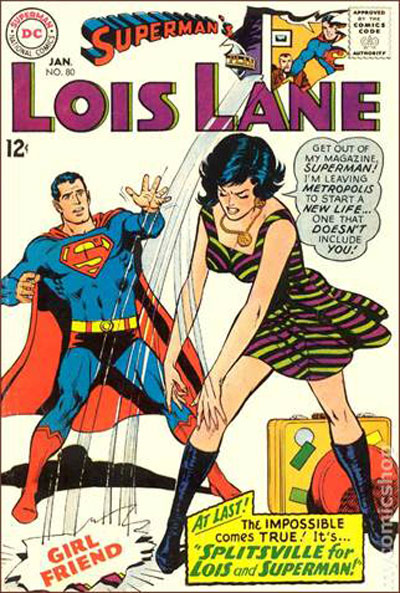 Batman’s enemies are, without a doubt, the most exciting ones. First of all, he gets one in the real world: he is accused of promoting homosexuality by the psychologist Frederic Werthan, in his book Seduction of the Innocent (1954), for which Americans changed the regulation code of the comic book industry. Later, in the early sixties, the character is handed to writer and editor Julius Schwartz and the stories become enriched with a focus on Batman’s detective skills. The Riddler, Mr. Freeze and the Joker all demand The Caped Crusader’s brainpower to discover complex noir plots, creating a three-dimensional world within the comic’s pages: ‘Perhaps most interesting is Detective Comics#332 (October 1964) in which Batman fights Joker for the first time under the new creative regime. In this story the Clown Prince of Crime creates a potent dust that causes anyone it comes in contact with to laugh uncontrollably. After encountering the drug, Batman researches possible cures and learns that a simple antihistamine will stop the uncontainable laughter. The Caped Crusader soon thwarts the villain’s evil plans and protects society from the psychopathic clown. This version of Batman is portrayed as being clearly more intelligent and cunning than his arch-nemesis, but The Joker is also more nefarious and crafty than he had been in recent appearances’. (Johnson 2014, 36). It is only natural to think that Batman’s foes evolve in complexity over time, the greatest example being a villain like Ra’s al Ghul, who, defying normal stereotyping, commits awful crimes believing it is best for the planet.

In this constant reshaping of the characters, one thing remains constant from the beginning: the foes are more metaphorical than the heroes for the darkest fears of American society in the way they reflect the heroes’ moral codes. In the first chapter, for example, that covers the early years (from 1938 to 1959), most evildoers evoke the desperate need of common people to keep America’s status quo. Superman fights against gamblers taking control over football games and ‘declares war on reckless drivers’. Superman deals with them using the moral code of an entire society: he enjoys humiliating, beating and sometimes even killing them. ‘These first superheroes were violent champions for a hardened people who demanded they act in such a way. The original versions of Superman and Batman did not conform to the rules against killing, maiming, battling authority figures and law enforcement’ (Johnson 2014: XVII). Johnson thinks these initial times can be seen, especially in Superman, as a kind of an adolescence because of his disregard for any point of view except his own. More a bully than a hero, Superman reflects the state of millions of Americans, adult men out of work ‘who had descended into hopelessness and Superman served as a bright spot in this bleak depressing age’ (Johnson 2014: 2).

Just three years later, with the entry of the US to World War II, the nature of both criminals and heroes changed radically: both Batman and Superman had to support governmental and military mandates, slowly becoming in the years to come guardians of the conventional values that were established with the prosperity and the sense of social unity that came after the victory over the Axis armies. What happened to our heroes in the sixties reflected a harsh division in the American people: while Superman becomes almost infected with paranoia and self-righteousness that characterized the conservatives in the post war era —having nightmares of being exposed to red kryptonite, splitting into evil Superman and good Clark Kent, turning into a space monster, among other adventures—, Batman goes through some nice years of detectivesque narrative, preparing for the blossoming of sexual liberation and anti-war movements that would become popular among youngsters a few years later. ‘The Dark Knight was now focusing more on his detective skills and was no longer fighting aliens or magical beings as he had in previous years…Batman was attempting to recreate himself from an evolving society, but it was unclear if a return to his detective roots combined with pop art influences was what readers demanded’ (Johnson 2014: 35).

One last thing is to note of this book: the detailed attention Johnson pays to the creative minds that shaped these heroes. Bob Kane may have designed Batman to be a ‘hardcore vigilante’, but it was Julius Schwartz in 1964 who invented some of his most engaging traits as a resourceful hard-boiled detective with no other tools to fight crime but his mind. Writers and artists like Frank Robbins, Bob Brown and Dick Giordano are mentioned as inventive, but Johnson points out a very short but fertile period in the seventies that would prepare the dark and gothic traits of Batman we have come to love, under the hands of writer Denny O’Neal and artist Neal Adams. In this period Batman first gets his many layers as a character, his neurosis and most subtle psychological features that Frank Miller would use in his ground-breaking The Dark Knight Returns (1986), later revamped for Christopher Nolan’s Dark Knight’s Trilogy.

Above all, the great journey this book offers is discovering how our beloved heroes appear to be two ends of the same rope, because, paradoxically, even when they change, they stay the same: Superman representing (mostly) the moral standards of the conservative side of American society, and Batman exploring (mostly) the darker, subterranean side, both equally sustaining and fundamental to the American social fabric.