Nick Sousanis’ Unflattening is a thesis-as-comic developed from the author’s doctoral dissertation for Teachers College Columbia University. Sousanis argues that images are not subordinate to words, but equal partners in the articulation of thought, and that sequential art is a vital scholarly alternative to either visual or verbal communication alone. 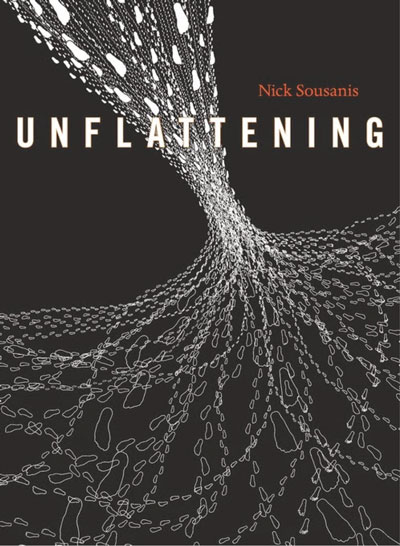 Originally created as a doctoral dissertation for Teachers College at Columbia University, this PhD thesis-as-comic is the latest stop in a journey by its author to explore scholarly essays in comics form. This quest began with Possibilities (2005), a shorter piece which helped secure Sousanis’ entry to Columbia’s doctoral programme.

Unflattening demonstrates the viability of a comic book as doctoral scholarship in its own right, rather than a separate work requiring some accompanying critical paratext. The imprimatur of Columbia and Harvard University Press surely confers Unflattening with added respectability for general readers and critics from outside the comics world, yet Sousanis’ thesis also presents a defiant challenge to conventional Western thinking about words and images. It is a deep interrogation of comics as both an art form and a critical practice.

Over eight chapters, Unflattening follows an anonymous, sleepwalking figure as they step out of a regimented life and take flight to explore new worlds. Sousanis draws the imagery of these worlds from TV, movies, the classical canon of art, and scientific diagrams. Unflattening embraces visual references from Paleolithic cave prints to James Bond films, and verbal ones from Bruno Latour to Wallace Stevens. The protagonist bears at one time Hermes’ sandals and at others wings of its own; it is incarnated as a Pinocchio-like puppet confounded by a centipede’s existential challenge, ‘Who are you?’, before finally being reborn as a child reminiscent of Kubrick’s 2001: A Space Odyssey (1968). The comic’s final image is of that newborn’s eye opening to see the world as if for the first time.

In the course of this journey, Sousanis dethrones the primacy of the word in a kind of Copernican revolution. He argues that image is not mere illustration, subordinate to words, but an equal partner and component in thinking. He explores stereoscopic vision and the principles of astronomical observation as metaphors in order to define ‘unflattening’ as ‘a simultaneous engagement of multiple vantage points from which to engender new ways of seeing.’ (Sousanis 2015: 32).

An extended sequence takes us through the world of Edwin Abbott’s Flatland, in which two-dimensional ‘A. Square’ encounters a three-dimensional sphere who exposes him to previously unimagined perspectives. We need each other’s points of view, Sousanis tells us, to avoid become constrained in set modes of thinking and blinkered perspectives, just as A. Square must be enlightened by his encounter with the sphere. Words and images together free us from the limitations presented by either the purely visual or purely verbal. These elements need not be in conflict in order to be dynamic; they can engage in a kind of visual-verbal dance across the page Figure 1. (Sousanis, 2015: 62). 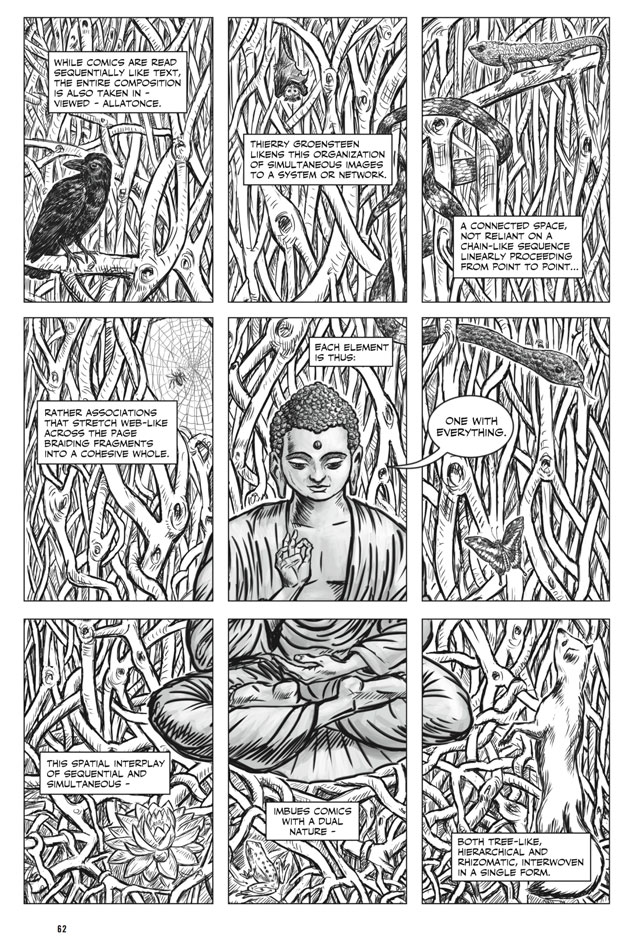 Unflattening’s challenge to epistemologies which favour the word over the image, and its concern with knowledge production and the legitimacy of multiple perspectives, distinguish it from what is perhaps the English-speaking world’s most famous essay-as-comic, Scott McCloud’s Understanding Comics (1993). Unflattening is not focussed on the history and development of comics as McCloud’s work has been; rather, it uses comics as a tool to unpick received wisdom around perception and dialectics.

The book speaks to Charles Hatfield’s characterisation of comics as ‘An Art of Tensions’: ‘We continue to distinguish between the function of words and the function of images, despite the fact that comics continually work to destabilize this very distinction. The tension between codes is fundamental to the art form.’ (Hatfield, 2009: 133).

What Hatfield articulates in prose - ‘in comics word and image approach each other: words can be visually inflected, reading as pictures, while pictures can become as abstract and symbolic as words’ – Unflattening demonstrates directly through use of the comics medium itself. Sousanis offers a clear and convincing demonstration that sequential art is a vital scholarly alternative to the restrictions of either the visual or verbal alone.

The breadth and ambition of Unflattening means that the book offers many invitations to join Sousanis’ dance of words and images, indicating areas which the reader will wish to question and develop in their own right. The common ground with Hatfield, who contemplates ‘how much the interaction of image and word can inform, indeed enable, the reading of sequences’ (2009: 138), is one.

Another area to pursue – surely the most significant, given Unflattening’s position in the history of comics-as-scholarship - is the use of the comics form as a critical tool in its own right. For example, the fleetness of the author’s wide-ranging references make one yearn for some kind of comics equivalent to close reading. Sousanis begins to hint at how this might be possible in sequences where he overwrites and overdraws previous passages from his own thesis to create layers of commentary Figure 2. (Sousanis, 2015: 82). 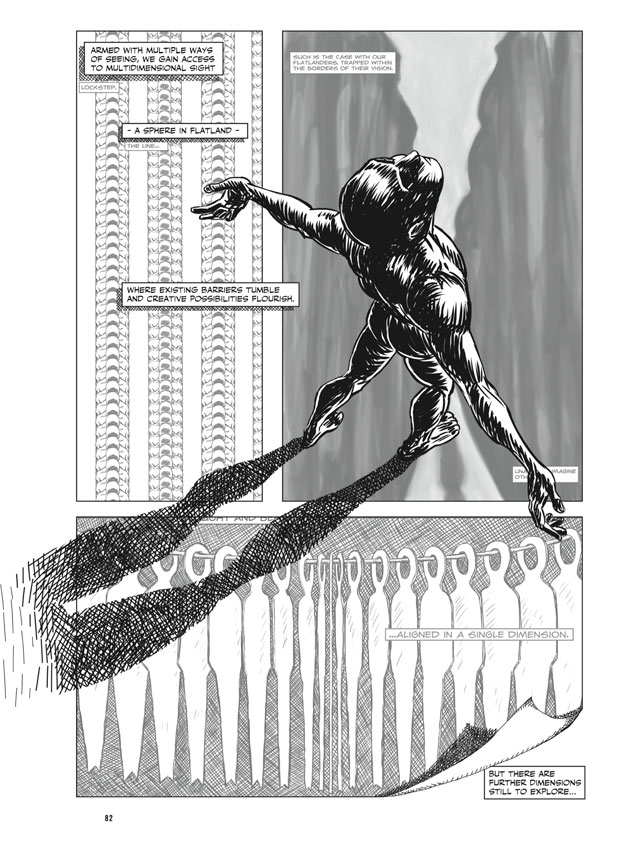 Layers of critical reflection – Sousanis’ protagonist stands on top of a previous page of the thesis (Sousanis, 2015: 82) Copyright (c) 2015 by Nick Sousanis.

Sousanis’ exploration of how a coastline appears longer as our units of measurement grow smaller serves as an invitation to more meticulous study of the vast conceptual territory which is outlined here, the implication being that future explorers might descend from a cartographer’s large scales to capture ever finer detail Figure 3. (Sousanis, 2015: 44). 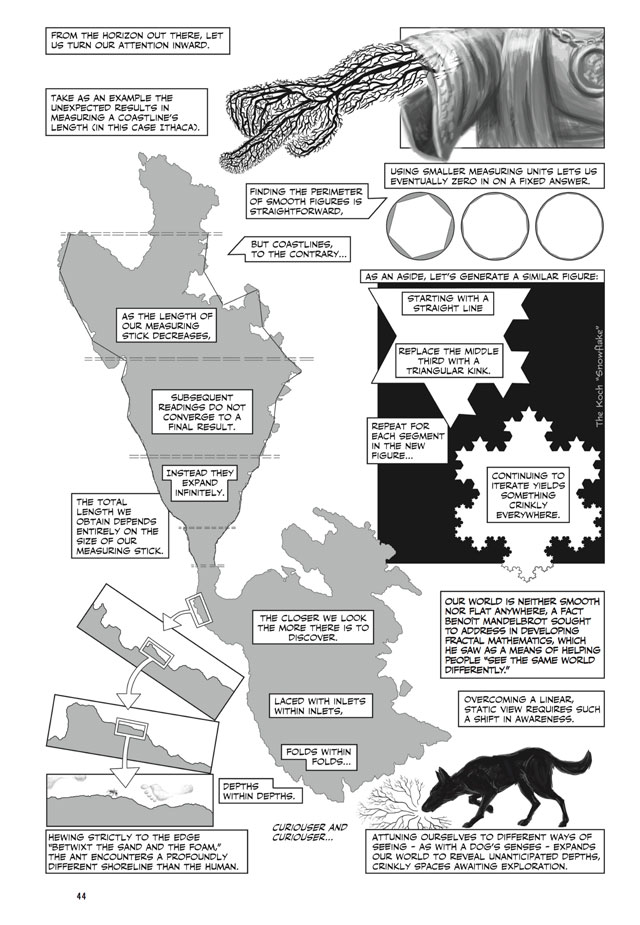 ‘There are always gaps:’ Sousanis writes, ‘spaces for the unknown, openings for imagination to spill into. Incompleteness reveals that there is always more to discover.’ (Sousanis 2015: 150). The great success of Unflattening is that the reader retires from this comics-essay feeling that to simply write about the form in prose is inadequate, and new discursive strategies are required to explore these open spaces. To understand comics is also to make them, to take part in the dance of word and image. It will be thrilling to see what artist-scholars do in the comics space now that Unflattening has broached the gates of the academy from within.