Wonder Woman is one of the world’s most recognisable comic book superheroines, yet the history of her creation and the unique universe of the early Wonder Woman comics are often eclipsed by television shows, and limited edition merchandise; whilst scholars simply focus upon Wonder Woman as the first mainstream comic book superheroine, a mere placeholder in the tapestry of comic book history. In Wonder Woman: Bondage and Feminism in the Marston/Peter Comics 1941–1948 (Rutgers University Press; 2015), Noah Berlatsky examines the original Wonder Woman comics and creators William Moulton Marston and Harry Peter, revealing a comic ahead of its time, capable of handling taboo subjects where other comics could not.

In Wonder Woman: Bondage and Feminism in the Marston/Peter Comics 1941–1948 (2015), Noah Berlatsky, editor of The Hooded Utilitarian1, studies the original Wonder Woman comics by William Moulton Marston and Harry Peter. Using close readings of individual issues, Berlatsky discusses how writer and artist worked together to created a feminist icon, and a comic which challenged the common preconceptions of superhero conventions, whilst also addressing serious issues including rape and incest. Each of Wonder Woman: Bondage and Feminisms three chapters examines what Berlatsky has identified as the early comics’ key themes: feminism, pacifism and queerness, before finally addressing how more recent incarnations of the comic interact with and pay homage to Marston and Peter’s original vision.

The book’s opening chapter, ‘The Pink Bondage Goo of Feminism’ is perhaps the weakest link in Berlatsky’s self-confessed “braided exploration” of Wonder Woman, its queer content and queer beginnings. In contrast to the chapters which follow, ‘The Pink Bondage Goo of Feminism’ presumes an existing knowledge and experience of both comic book culture, and Wonder Woman’s origins. Berlatsky begins the chapter with a close reading of Wonder Woman #16, establishing both his detailed knowledge and passion for the comic as he analyses the minutiae of each panel, before moving on to examine the comic’s themes of bondage and fetishism, rape and incest. Berlatsky puts forth several unique and compelling arguments throughout this chapter, including an exploration of the connections between the comic’s images of Wonder Woman and the Holliday girls bound and disempowered by Pluto, and the trapped and traumatised female protagonists of popular gothic literature. This was a particularly fascinating thread, placing Wonder Woman within a wider literary canon, whilst considering the implications of being bound both literally and metaphorically. Critics including Gloria Steinem (1972) have neglected to engage with the recurring bondage imagery; Berlatsky suggests that the regularity with which Wonder Woman and other characters are pictured as having been bound and gagged can be perceived as laughable or embarrassing, and thus he calls for further critical engagement with the images. 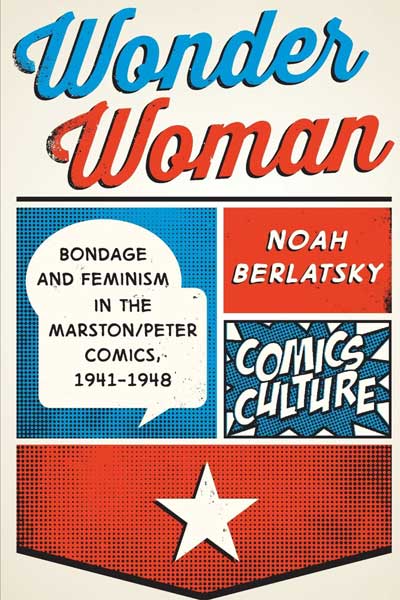 Although Berlatsky raises some intriguing points, his arguments are, at times, overshadowed by the volume of critical theory used within the chapter. Indeed, more time is spent attempting to engage with, and in some cases explicate, Freud’s theories of father-daughter incest, or Susan Brownmiller’s discussion of rape fantasies in Against Our Will (1975), as opposed to examining Wonder Woman, or the comics’ eponymous heroine in greater detail.

In contrast to ‘The Pink Bondage Goo of Feminism’, the book’s subsequent chapters, ‘Castration in Paradise’ and ‘Candy You Can Eat’, address an entirely different audience: Berlatsky suddenly seems to assume that the reader lacks experience with both superhero comics in general and the Wonder Woman comics specifically and thus adopts a tone and style more suited to an introductory chapter than a critical examination. Wonder Woman: Bondage and Feminism’s lack of a clear audience and its odd structure are its greatest weaknesses. Although Berlatsky suggests that the book’s structuring is arbitrary, the first chapter seems out of place within the book. Equally, whilst Berlatsky establishes whom the book is not for, it is never entirely explicit whom the book is for. Thus, the second and third chapters seem to belong to a completely different book to the opening chapter, and this is particularly evident when taking into account Berlatsky’s use of secondary critical materials in this chapter.

‘Castration in Paradise’ explores the conventions of superhero comics and heroism. Using Spider-Man’s origin story and Superman comic, The Nail (Davis and Farmer, 1987), Berlatsky uncovers a male bias towards, and indeed reader expectation of, both heroic action and the use of violence as means to resolve conflict. Evoking Jean Bethke Elshtain’s (1987) male “Just Warrior” and female “Beautiful Soul” models, Berlatsky demonstrates how Marston and Peter challenged and subverted these conventions through their portrayal of Wonder Woman and Steve Trevor. Certainly, the Amazon princess spent a great deal of time rescuing the wounded soldier, Steve Trevor, from various compromising and emasculating scenarios, aided by the Holliday girls. However, by drawing on Japanese urban legends of mother-son incest and concentrating on the portrayal of conflict resolution, Berlatsky expertly argues that Wonder Woman promotes and reveals Marston’s personal views that women made superior heroes and leaders, and that so-called feminine qualities such as love and forgiveness are more powerful motivators or deterrents than the fear or violence depicted in Batman or Superman. Certainly, as Berlatsky notes, Marston presents villains as submitting to the Amazon princess and reforming; they do not become part of an extensive, reoffending gallery of rogues. Berlatsky’s argument is convincing and compelling, bringing to mind writer Gail Simone’s oft-tweeted opinion that historically, the character of Wonder Woman has been a more efficient and successful superhero than her male colleagues.

In ‘Candy You Can Eat’ Berlatsky does not lose momentum as he moves on to examine the frequently debated issue of potential homosexual content present within the Wonder Woman comics. As with chapter one, Berlatsky once again draws attention to other critics’ coy handling of the comics’ subject matter, this time structuring the chapter to systematically engage with the views offered by critics including Trina Robbins (1996) and Lillian S. Robinson (2004). In contrast to his predecessors, Berlatsky is refreshingly direct, arguing that the presence of innuendo and sexually-suggestive imagery is deliberate. He skilfully combines close-readings of several individual Wonder Woman comics with a detailed examination of Marston’s personal life and psychological research as evidence.

Although this chapter is ostensibly about the comic’s homosexual undertones, Berlatsky is able to explore other themes such as bondage and fetishism in greater detail, perhaps in part due to the chapter’s extensive focus on Marston’s background as a feminist and psychologist, as well as his private polyamorous lifestyle. Certainly, the chapter’s emphasis and close examination of Marston is one of the book’s great strengths, and greatly enhances Berlatsky’s various close readings of the Wonder Woman comics. In some instances, this chapter both compliments and, in some instances, offers greater insight into Marston and his Amazon creation than Jill Lepore’s recently published The Secret History of Wonder Woman (2014). ‘Candy You Can Eat’ is arguably the book’s most successful chapter. It focuses almost exclusively upon the Amazon and her creators providing a uniquely analytical perspective into an iconic character which are of interest to both fans and critics alike.

Berlatsky’s book offers a much needed insight into the background of the world’s most iconic superheroine that has been otherwise missing from the existing canon of comic book study.