This five-page comic, contextualised with a research note, provides an introduction to discursive approaches to genre, inspired by Rick Altman’s Film/Genre (1999). It seeks to demonstrate the necessity to go beyond textual or prescriptive approaches, using the example of zombie films. The comic is arguing that some films that contain zombies are not usually seen as being part of the zombie film genre. The work proposes that our perception of genre in those cases relies on various discourses that frame our reading of the texts themselves. This framing operation is at once the function and the nature of genre.

Some films which contain zombies are not usually seen as being part of the zombie genre (because of conflicting generic affiliations) while several films without zombies are linked to the genre (such as George Romero’s The Crazies, 1973, known in France as La nuit des fous vivants, “Night of the living crazies”) or even part of its modern canon (Danny Boyle’s 28 Days Later, 2002). Here I argue that our perception of genre in those cases relies on various discourses that frame our reading of the texts themselves, and that this framing operation is at once the function and the nature of genre.

Reading Rick Altman’s Film/Genre (1999) a few years ago provided me with the theoretical apparatus I needed to approach genres in a suitably nuanced way. At that point, I had become increasingly frustrated with prescriptive approaches to genres, in which authors set out to delineate what was part of the genre and what was not. I am of course not going to enumerate examples these approaches, but I have in mind Pete Coogan’s attempt to remove Nick Fury from the super-hero genre in his otherwise valuable approach to super-heroes (2009: 86–87).

It seemed to me that at the very least, these text-based approaches missed the role of the various cultural institutions that frame our consumption of these texts. To come back to Nick Fury, surely the fact that it was published as a super-hero comic in the late 60s and 70s had to play a role in our description of the character’s generic alignment?1

I was also wary of anyone presuming to “rule in” or “rule out” anything from such a collective notion as the super-hero genre. While it is perfectly acceptable to cast aside these considerations for a while and focus on a text – all the more so since reception studies are notoriously rare and difficult to conduct – doing so has to be a deliberate choice as opposed to an unacknowledged blind spot.

Rick Altman’s approach not only includes the various institutions and interpretative communities that shape genres, but it describes their various interactions, based on specific historically located examples. It still constitutes the core of my conception to genre and I have seen it put to great use by other scholars, such as Grégoire Halbout (2013) in his study of Hollywood screwball comedies. Though it focuses on cinema, Altman’s approach can be applied fairly directly to comics and probably other forms as well.

This comic was an attempt not to reiterate Rick Altman’s nuanced demonstrations, but to point to the aporias of a prescriptive approach to genre for readers unfamiliar with the underlying theory. It was thus conceived as a teaching tool, an introduction rather than as a truly scholarly exploration. As such, it skims over some difficulties and may oversimplify some points.2 I do hope it is useful and convincing, though.

This piece echoes a scholarly article in comics form about genre(s) in the movie Shaun of the Dead (E. Wright 2004) co-written with Jean-François Baillon, which puts to use some of these theoretical considerations. It is to appear soon in Angles3. 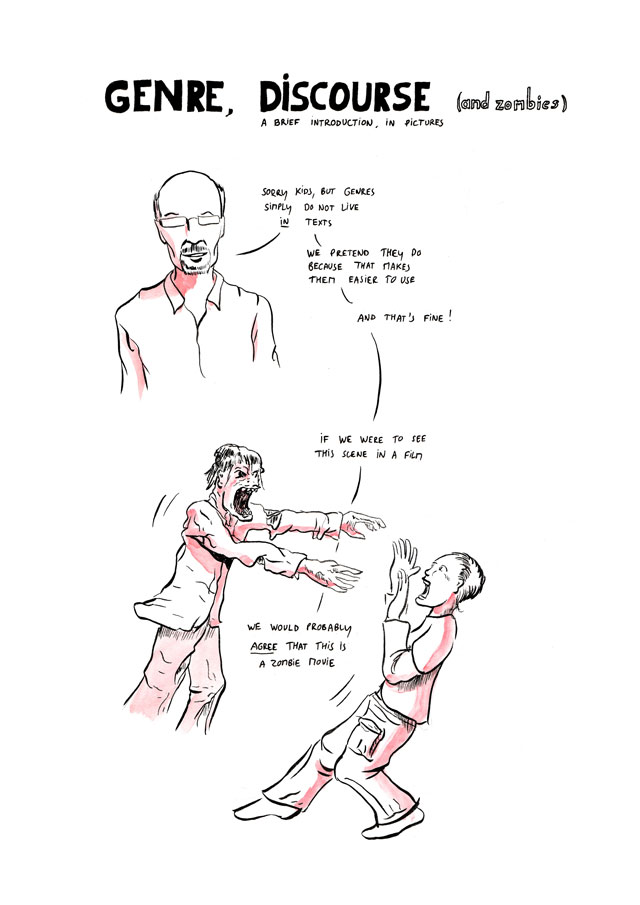 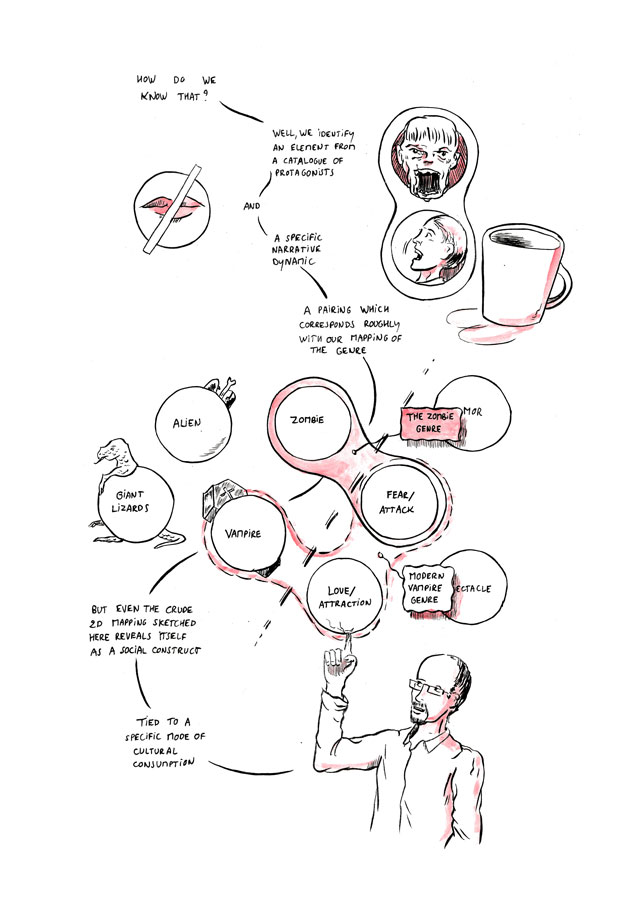 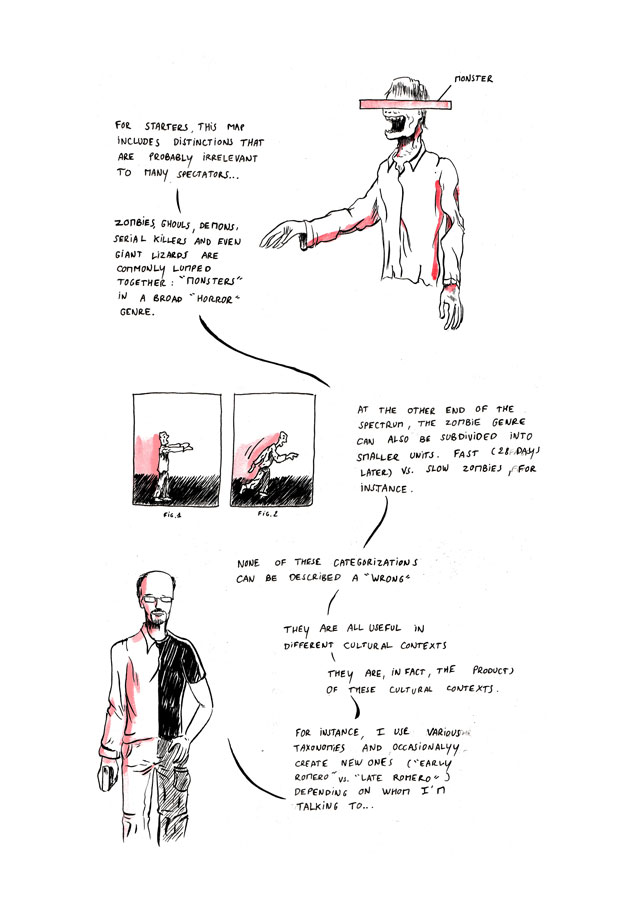 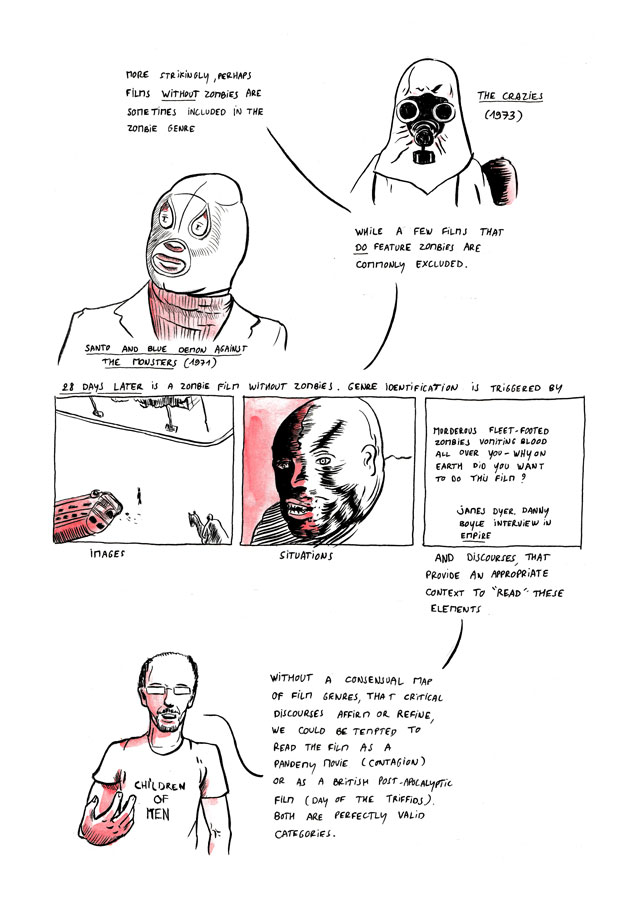 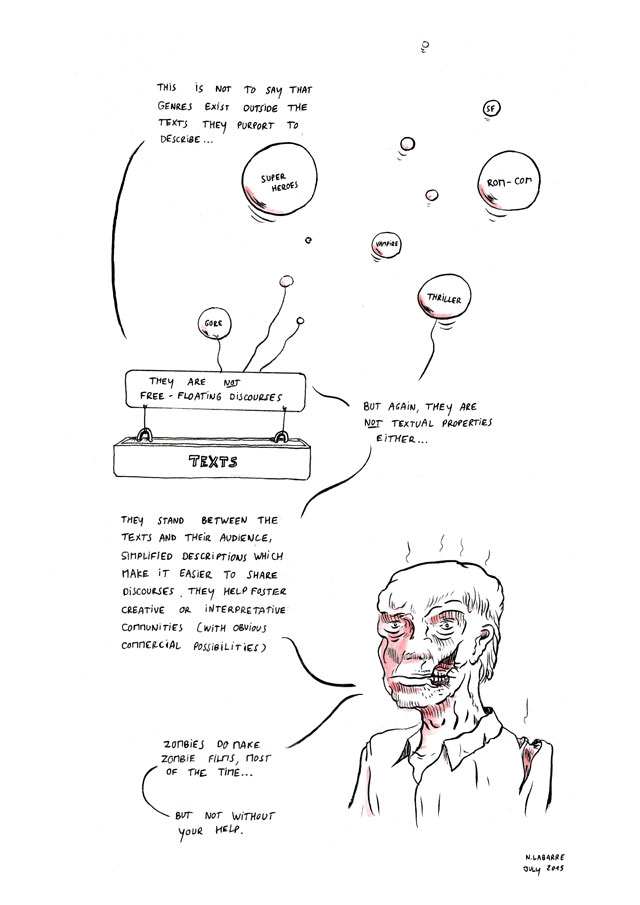