This book review provides an overview of Movie Comics: Page to Screen/Screen to Page by Blair Davis (Rutgers University Press, 2017) a book which examines the reciprocal adaptations of film into comics and comics into films from 1930 to 1960. This review argues that Movie Comics provides a useful and finely-textured cultural history of that phenomenon, which help contextualize scholarly studies of contemporary adaptations and transmedia constructions.

Movie Comics: Page to Screen/Screen to Page (Davis 2017; Figure 1) is part of an ongoing surge of academic interest for the adaptation of comics into movies. In 2016 alone, books such as The Modern Superhero in Film and Television (Brown 2016), Marvel Comics into Film (McEniry et al. 2016), Panel to the Screen (Morton 2016), The Comic Book Film Adaptation (Burke 2016) and Comic – Film – Gender (Sina 2016) have all sought to examine the intermedial relationship between film and comics, from a variety of angles. Several other publications have also tackled the sprawling transmedia narratives elaborated around contemporary superhero films, of which comics are a vital component. 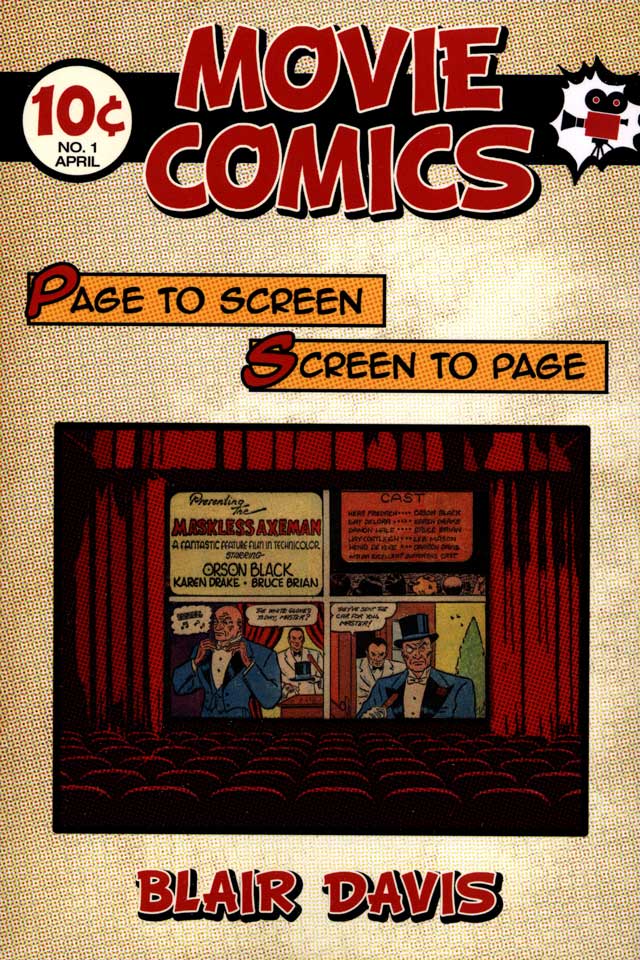 The cover to Blair Davis’s Movie Comics (Rutgers University Press, 2017). The comic depicted on the cover is a detail from a faux film adaptation in Target Comics #1 (1940), by Tarpe Mill.

Blair Davis’s books stands out from the rest of this production both in its historical focus – Movie Comics examines a previous “golden age” of American comics adaptations, from the 1930s to the beginning of the 1960’s – and in its insistence on treating adaptations as a reciprocal transaction, page to screen but also screen to page. While most contemporary scholarly writing focuses on the adaptations of comics into films, downplaying the importance of the steady output of “graphic novelizations”, Davis examines the circulation between comics and films as part of a two-way system. There are historical reasons for the dominant focus on a specific direction of circulation, as publishers themselves now suggest that regular film adaptations may have become obsolete. However, Davis demonstrates that even unimaginative commercial transpositions of films into comics conform to Linda Hutcheon’s definition of adaptation as “repetition without replication” (Hutcheon 2006: 173) and are worthy of critical and historical attention.

Movie Comics is primarily a cultural history of theses adaptations. It is interested in the films and comics themselves, but also in “the industrial factors surrounding [them] and their source material, the adaptive strategies that emerged, and the contexts of reception in which they were consumed” (Davis 2017: 9). The book draws abundantly from contemporary sources, in particular trade journals, to call attention to the discourses surrounding these adaptations and to the concerns of the various industries which produced them. Davis also relies from a wide array of sources about comics, ranging from general histories (Gabilliet 2010; Gordon 1998; Howe 2013) to formal theories (Groensteen 2007) and author interviews. The lack of established trade publications for comics in the period under study provides a perceptible imbalance in the description of the two media, but the book strives to correct it whenever possible.

Movie Comics is organized in a chronological manner. For each of the three decades studied, a chapter on comics-to-film (then television) adaptations is followed by a chapter on various representations of movies in the comics. These include actual adaptations, in Dell Four Color series for instance, but also various examples of intermedial practices on the margins of adaptation, such as illustrated vignettes about the life of movie stars. Davis devotes a deserved attention to pseudo-adaptations – Standard Comics published a short-lived series entitled Television Comics in 1950, for instance, which was not based on any existing TV show (Davis 2017: 203–205) – as discourses in which film and televisions are carefully reconstructed for comics readers.

The choice to open each period with film adaptations before tackling the more diverse interpretations of film in the comics is a convincing one, leading the reader from mostly straightforward transpositions to more ambiguous and often obscure reinterpretations in the comics pages. The abundance of well-reproduced illustrations, which include film posters, stills, advertisements and full comics page helps structure this historical narrative, acting both as illustrations and evidence of Davis’s arguments. One can only regret that the comic book artists tend to go unmentioned in the captions. Davis’s writing is also enjoyable and precise at all times, weaving case studies and general observations into a coherent narrative, in spite of the chronological backtracking implied by the alternating chapters.

Movie Comics does not upend existing narratives on the relationships between the two media. In the 1930s, comic strip characters enjoyed multimedia success which led to numerous radio adaptations, and in a number of cases, to serials (Flash Gordon, Dick Tracy, etc.) and feature films (Skippy, Blondie, etc.). Meanwhile, cinema appeared in comic strips mostly as a setting, though Disney soon realized the potential of cross-promotion through adaptations and transmedia expansions. With a few exceptions, the then-nascent comic books did not offer a most sustained engagement with movies, though they did include a fair amount of trivia pertaining to movie stars.

In the following decade, comics adaptation into films settled into a pattern of cheap productions, either in movie serials or in long running series of B features films: Fred Harman’s Red Ryder was adapted 27 times from 1940 to 1950, while Chic Young’s Blondie was the star of no less than 28 films between 1938 to 1950. Meanwhile comic books featured a “wide range of movie content”, either adapting or simulating the cinematic experience. In the case of Superman, as discussed recently by Matthew Freeman (Freeman 2015; Freeman 2017: 145–188), the coexistence of animated cartoons, a radio show, comic book adventures then a serial made it possible to create an ambitious and somewhat postmodern transmedia universe in which the comics version of Superman could even meet its incarnation in other media. During the same decade, Dell started publishing a series of extremely successful variations on existing Disney characters, alongside with direct adaptations of feature films, and cowboy comics based on B movies stars (Gene Autrey, Tom Mix, etc.) enjoyed a spectacular if rather short-lived boom.

In the final decade covered in the book, 1950 to 1960, Davis chronicles the disappearance of the serials (the final example was produced in 1956), the resurgence of prestigious features films based on comics characters – The Sad Sack (1957), Prince Valiant (1954) and Li’l Abner (1959) – but also, and more crucially, the increasing role of television. The impact of the new medium on comics reading is well documented (Gabilliet 2010: 201–203), but Davis adds texture to this narrative by detailing the many ways in which comics were adapted for television, from live action shows (Flash Gordon) to puppets capitalizing on the trend set by Howdy Doody (Fearless Fosdick, a spin-off of Li’l Abner) to “telecomics”, slide shows of comics panels presented with voiced dialogues or a narrator. By the end of the decade, however, and with the exception of the reruns of the Adventure of Superman series, comics had mostly disappeared from television. In turn, comic books sought to capitalize on the popularity of the new medium, either by using its stars or by providing ersatz, such as the aforementioned TV Comics. Some of the major publishers, including Fawcett and Dell, also produced series devoted to film adaptations, working closely with film studios to ensure mutual exposures. Disney-owned characters, meanwhile, were still providing Dell with the best-selling comic book of the decade.

The general outline of this narrative is well known, and some of the examples used in Movie Comics should be familiar to anyone with an interest in the history of comics adaptations, and the history of American comics more generally. However, Davis complements these existing narratives in several ways. His use of trade journals in particular provides key information about the role of comic within the cultural industries of the time, allowing his reader to grasp the economic framework in which these adaptations were conceived and deployed. As noted above, this is especially true for the screen adaptations, owing to the paucity of business meta-discourses in the comics industry at the time. These external discourses even allow him to compensate for the biases of modern aesthetic judgements on such dated cultural objects as the superhero serials of the 1940s. His reading of the Batman serial runs against the grain of fan valuation (Davis, 2017, pp. 100–101), and his unearthing of contemporary descriptions of George Reeves as a “spitting image of the comic strip drawing” in the Adventures of Superman TV show may also run against the modern viewer’s judgement (Davis 2017: p. 196). Both examples show a keen attention to the recreation of a cultural context in which these adaptations can be fully understood.

Movie Comics also pays close attention to a variety of remediation strategies, which have less to do with adaptation than with the way each medium represents the other. His examination of the pseudo-films and specifically pseudo-television shows reveals a lot about the relative states of the mass media, in spite or perhaps more accurately because of the striking blandness of the comics he studies. Reciprocally, the attention Davis devotes to the strange choice of using animated characters in lieu of filmed special effects in the 1948 Superman serial testify to the then unrivaled capacity of comics to produce fantastic images. Again, these variations are carefully contextualized by a study of the ancillary discourses surrounding these remediations, such as the recurring claim that films would bring comics characters “to life”.

Early in the book, Davis announces his intent not publish a catalogue but to offer a detailed narrative from which “patterns” emerge (Davis 2017: 10), which can in turn illuminate more recent development. Indeed, the attention paid to case studies and telling details in the context of a legible narrative is the great asset of the book. Movie Comics is perhaps less convincing when trying to tackle adaptation theory in the abstract, as exemplified with the rather summary treatment of the different temporalities of comics and films (Davis, 2017, pp. 76–77). Conversely, the bibliography omits such prominent adaptation theorists as Linda Hutcheon, Thomas Leitch or Robert Stam.

As can be expected from a text which seeks not only to present case studies, but also to look at “the larger industrial frameworks of how media texts are developed and circulated (Davis 2017: 10), Movie Comics also eschews discussions of non-American films and comics. A study of transnational adaptations, which blend intercultural and intermedial circulations (there were original strips based on Chaplin’s Tramp in Europe, and even European adaptations of American movie serials for instance) thus falls out of the scope of the book. The choice not to include characters and series which originated in radio or in novels before migrating both to movies and comics is more troubling, however. While these examples would undoubtedly have complicated the page-to-screen, screen-to-page dynamic, the absence of Zorro, Tarzan and the Lone Ranger is conspicuous and somewhat problematic.

Given the number of cultural objects under discussion, is probably inevitable that the Movie Comics sometimes feels like an invitation to refer to more specialized writings, such as Scott Higgins’s work on the formula of movie serials (Higgins 2016). Through the images and careful readings it presents, the book also prompts its readers to discover the films and comics themselves, most of which have fallen into the public domain and are readily accessible online. The curiosity which the Movie Comics elicits about these mostly forgotten artifacts testifies to the success of its project: making accessible and understandable a period heretofore covered only tangentially in a variety of cinema and comics histories. The cultural history it presents provides a nuanced and polyphonic account of the practice of adaptation in the middle of the 20th century, a necessary background for anyone interested in the current surge in the practice and discussions of comics adaptations.