This review offers an account of journalist Anne Elizabeth Moore’s short comics, co-authored with the Ladydrawers collective, relating to the fashion industry and global apparel and sex trades, and that have been recently collected together in book form. The review argues that the resulting book, Threadbare: Clothes, Sex & Trafficking (2016), is evidence of the ability of the comics form to document social justice issues with nuance, yet without losing sight of the politically imperative calls for change that those issues demand.

Between 2013 and 2016, cultural critic, author and journalist, Anne Elizabeth Moore, wrote scripts for several comics, each of which documented a specific instance of discrimination relating to the global circulation of apparel and fashion, from its labour exploitation in Cambodia and Bangladesh to the culture of fast fashion that has reshaped the industry in the US. These scripts were then brought to life by the Ladydrawers comics collective, ‘an unofficially affiliated group that researches, performs, and publishes comics and texts about how economics, race, sexuality, and gender impact the comics industry, other media, and our culture at large’ (Ladydrawers: About, n.d.).

The resulting comics, which collectively tell a multinational story of the global fashion industry and its varying intersections with the rights of fashion models, factory labour and sex workers, in both the Global North and South, were published individually on Truthout, an online magazine that ‘works to spark action by revealing systemic injustice and providing a platform for transformative ideas, through in-depth investigative reporting and critical analysis’ (‘Truthout: About us’). Given the extent to which the various topics covered by each comic are intimately interwoven with one another, it is particularly suitable that they have now been collected in book form as Threadbare: Clothes, Sex & Trafficking (2016; Figure 1). 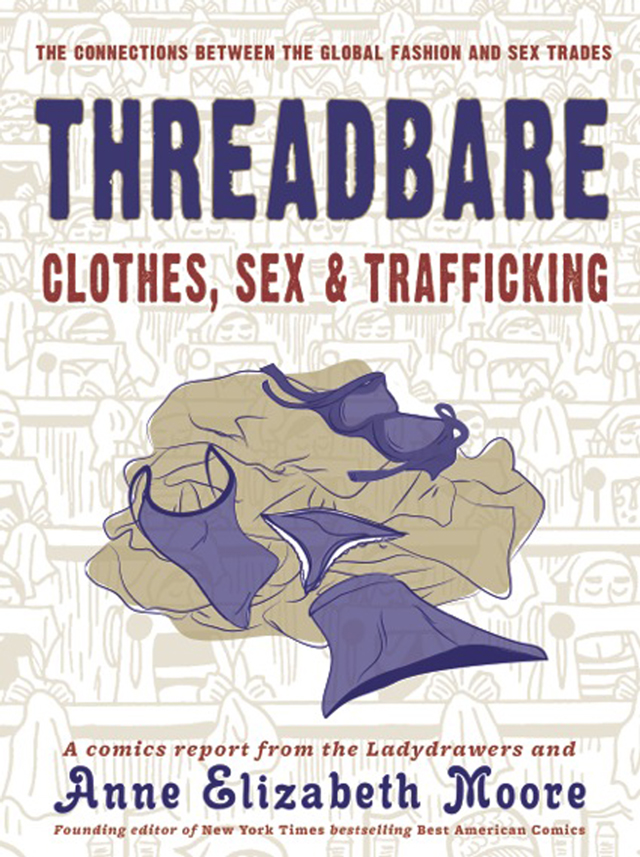 This clothing metaphor, which describes a set of stories—not to mention social and economic relations—interwoven unevenly across different international spaces is an intentional one, self-consciously adopted by Moore to foreground the overarching project of the comics series. ‘The threads that connect the sex industry to the garment industry are many’, one strip concludes, ‘but if you look closely, you can figure out how to unravel them’ (124). Moore’s project is designed to reveal the ways in which one clothing purchase in the US is embedded in complex web of intimate and often violent relationships, and it traces these as they cross national borders through the varying and deeply unequal avenues opened up by both multi-national corporations and migrant labour routes.

Indeed, Moore’s project might be said to offer a window onto the complexities of twenty-first-century globalisation more broadly, showing how all industries ricochet with all kinds of unpredictable ramifications into others, and how often it is women, be they fashion models, factory labourers, or sex workers, who bear the brunt of the ensuing violence. Divided into four chapters—‘The United States’, ‘Austria’, ‘Cambodia’ and ‘The World’—organised geographically, prefaced by a short prose introduction and followed by five strips, Threadbare overlays these different spaces onto one another to give clarity through visual narrative to the complex connections that intertwine them.

Moore claims that the decision to convey these stories in comics form was chosen in part for its accessibility, a motivation that accords with the remit of the Ladydrawers collective and emphasises the geopolitical urgency of the collection as a whole. But where some prose texts might dispense with nuance in order to further the impact of their political message, in Threadbare as in other comics journalism, the comics form allows for a self-reflexive agility that implicates the reader in the clothing industry about which they are learning. Though accessible, the multi-panel layout of the comic, rather than simplifying the deeply complex issues that it documents, instead shows how any simplification of global issues as complicated as the international fashion industry and apparel trade can have, even if unintentionally, violent ramifications. Moore herself realises this, commenting in her introduction that conveying her documentary narrative through sequential art enables her ‘to paint a clear image of the otherwise impossible-to-picture international apparel trade’ (10).

Threadbare therefore demonstrates that, as critic Georgina Banita argues, comics’ accessibility allows for ‘civic education through information, empathy, and mobilisation’ in diverse readerships (2014: 51). But it is also further evidence that, as another critic, Katalin Orbán, has written of comics journalism more generally, ‘the chain of procuring and transmitting knowledge’, which is self-reflexively confessed by the juxtaposition of visual panels separated by gutters, ‘not only allows distant publics to inform themselves’, but might possibly allow for a ‘more contemplative kind of looking’ (2015: 124, 127–8).

As for so many other non-fiction documentary comics, from the work of Joe Sacco through to the contemporary proliferation of journalistic webcomics, the inclusion in the drawn graphic of the figure of the ‘witness’, who gives ‘testimony’ in order to verify the validity of the stories conveyed, recurs in Threadbare’s various strips. Many of the short comics centre on individual accounts, drawing these witnesses into the comics frame so as to foreground the impact that these complex global trade relations have on real people, even as these individuals are often anonymised to protect those still in precarious situations.

In one episode, entitled ‘Serpent Libertine’, a sex worker relates the way in which the recent humanitarian outrage over human trafficking in the US has had a negative impact on the lives of many sex workers (Moore, 2016: 125–146; Figure 2). Human trafficking is to be condemned, of course, but conflating human trafficking with prostitution eschews the agency of those who choose sex work as a legitimate occupation. Perhaps Threadbare’s most poignant political insight is that the hysteria around human trafficking, and the criminalisation of sex work that has entailed, in fact serves the interests of the global fashion trade by forcing poor women out of the sex trade and back into the labour force for clothing production. Some NGOs, often funded by right wing Christian organisations in the US, as the comic documents, even ‘rehabilitate’ sex workers by training them in sewing and other apparel related labour activities. 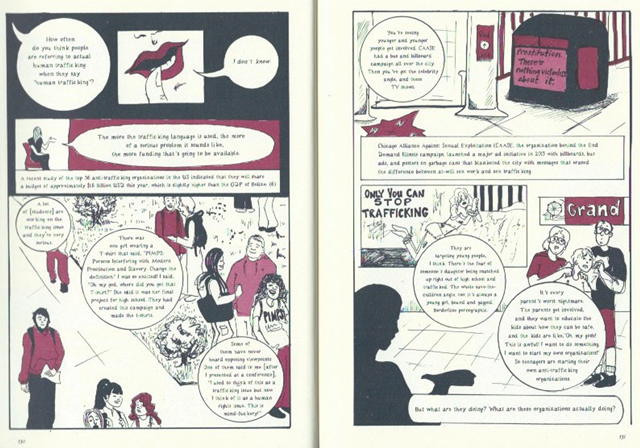 Retaining this level of nuance without losing sight of the cross-national global economy that exacerbates these different kinds of structural violence is no mean feat, and there can be no doubt that this is in part down to Moore’s shrewd journalistic eye and experience of the industry about which she writes. However, Threadbare is also testament to the fact that the multi-panel, visual layout of comics is particularly adept at representing and interrogating the various layers of discrimination and violence perpetuated within the industry, from the obvious to the subtle. That the comics of which Threadbare is constituted were published first online—and can still be read for free on ‘Truthout’—is indicative of the democratically accessible public space that contemporary comics journalism is currently in the process of producing.

In an age of increasingly restrictive national borders and limited physical movement for the world’s most dispossessed, this cultural space is a welcome one, creating a place to document and inform readers about the violence of globalisation and, from that critique, to consider ways of resisting it. For those with the means to purchase Threadbare in its book form, the collected comics are combined into both an educational tool and an aesthetically pleasing object that will surely become an increasingly used and celebrated form in years to come.