This review argues that Taking Turns: Stories from HIV/AIDS Care Unit 371 (Czerwiec 2017) provides an accurate and factual account of the history of the HIV/AIDS pandemic in America in the 1990s. Through the use of illustrations and text, the book presents the reader with an immersive account of what it was like to provide care to HIV/AIDS patients during that time.

At the height of the HIV pandemic in Chicago, MK Czerwiec was working as a nurse in Unit 371, a dedicated HIV/AIDS care unit. Czerwiec’s book, Taking Turns: Stories from HIV/AIDS Care Unit 371, published by Penn State University Press in March 2017, is a reflection of her time in the unit and her experiences working with the patients. The book presents a visual history of HIV care from Czerwiec’s perspective and the oral history of her colleagues, covering the complexity of the disease, the emotional and ethical boundaries of careworkers, and the far-reaching effects on the patients, friends, family, and providers.

Taking Turns tells one story, that of Czerwiec, in comics form. The illustrations are simple and often presented from a first-person perspective, allowing the reader to embody Czerwiec and place themselves within her memories. Through the pages, we travel from nursing school, to her first days caring for AIDS patients, to negotiating boundaries of care, to the death of those she cared for, and to coping with such losses of life.

The language of the book is not laden with the complicated terminology that surrounds HIV or, indeed, most medical care. Instead, these things are explained through the illustrations: one annotated drawing takes the place of paragraphs of text. As a result, the reader is able to quickly comprehend the complexity of various details, such as the difficulty of balancing a multitude of medications for a single patient’s regime (Figure 1). 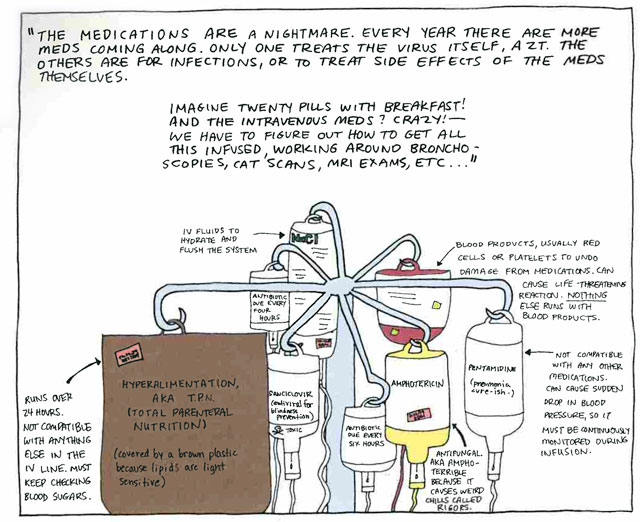 Understandably, the book is factual but the patients are not. Czerwiec has combined the oral histories of those she worked alongside with composite characters of the patients they cared for. Despite this interweaving of fiction and truth, the story never strays to the fantastical – it is never too grim nor too cheerful, it just is. Even with all of the emotionality of the topic, the reader is never pushed to emote in a particular manner; instead, the colours, illustration, and language simply present the story and allow the reader to reflect on the issues presented and to react in their own way.

The book sheds light on the things you would expect: the sickness, dying, death, and grief involved with the disease. But it also sheds light on aspects not immediately considered or talked about. For example, how caring for patients dying of HIV/AIDS can result in a build-up of emotions that the carers are left to find a way to release. In Taking Turns, we can see how Czerwiec dealt with her experiences through writing, painting, and drawing (Figure 2). However, this only hints at the reality of HIV/AIDS healthcare workers in the 1990s: the work often resulted in high levels of emotional distress and psychological stress, sometimes leading to occupational burnout (Bennett, Kelaher, and Ross, 1994; Hayter, 1999). 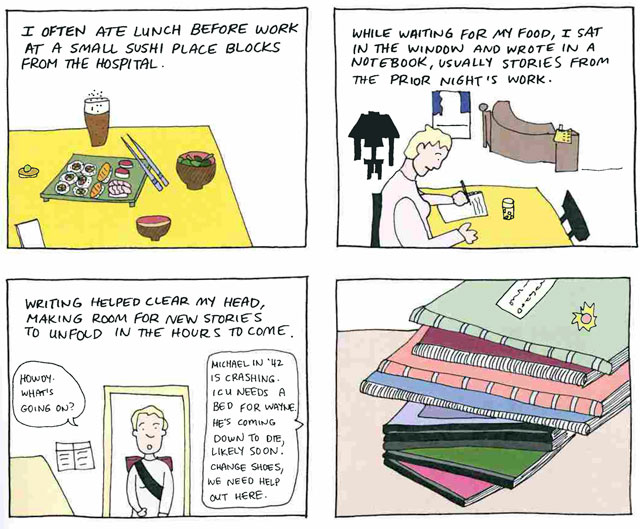 Taking Turns also highlights the challenges in boundary-setting that medical professionals working with HIV+ patients faced during that time. Some of the boundaries seem quite simple, such as sitting on a patient’s bed while talking to them (Figure 3), but others illuminate how some careworkers felt the call to expand their roles to bridge the gap between providing care and caring (Figure 4). Such changes were not required, but encouraged as a means of reducing the feeling of stigmatisation that surrounded (and still surrounds) HIV and AIDS, even within the care setting (Alonzo and Reynolds, 1995; Naughton and Vanable, 2013). 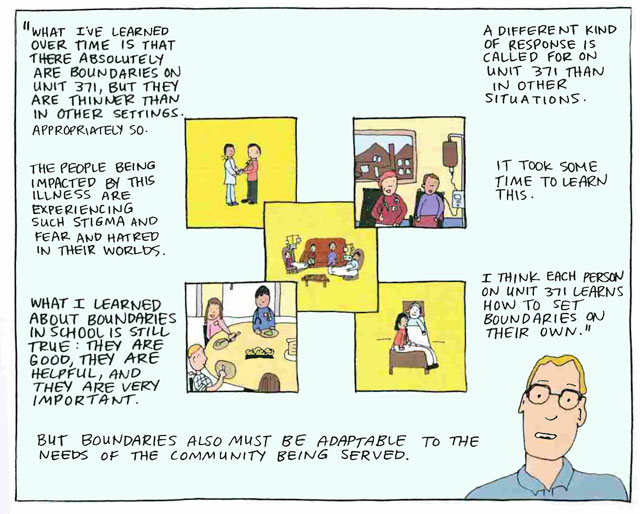 Moreover, the value of Taking Turns lies in the its ability to bring a human side to the jargon-filled statistics so frequently used to describe this time period of the history of HIV. Rather than hit the reader with shockingly high percentages of those we lost, or technical terms for the ways the virus destroys the body, Czerwiec uses approachable and simple or uncomplicated drawings of one-on-one interactions. Take, for example, the panel on page 43 (Figure 5), which shows the daily stress of a nurse playing multiple roles in an HIV ward and compare it with the distanced language of academic articles describing “the complex biopsychosocial aspects of nursing care for persons infected with the human immunodeficiency virus” (McCain and Zeller, 1993) or the “conflict between the goal of restoring function, occupation roles and relationships, and providing services for someone who will die prematurely” (Barbour, 1994). 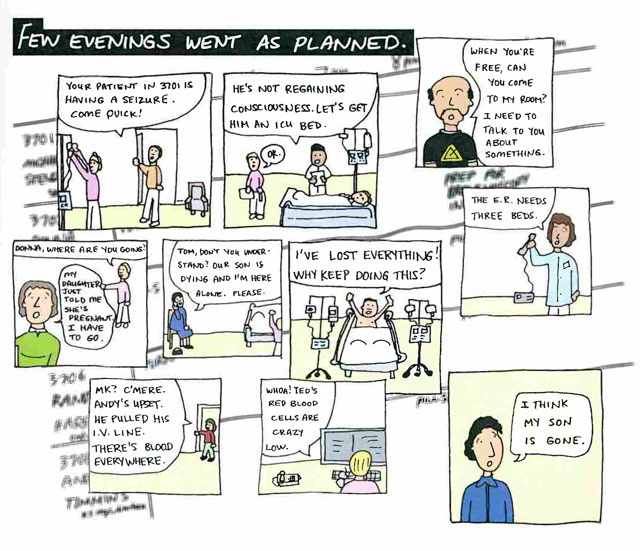 Czerwiec’s book is an important contribution to ‘graphic medicine’ as a growing category of graphic narrative works that are also health information resources in their own right (Williams 2012; Czerwiec et al. 2015; Farthing & Priego 2016). Taking Turns creates an accessible understanding of a fearful time and complex disease through the use of comics.

With first-person perspectives, simple line-drawings, and straight-forward language, the reader is able to place themselves within this important time of medical history and absorb what occurred, and in this sense it does not only prompts the reader to empathise with HIV/AIDS patients but with the health professional narrator, making a contribution to ‘the cultural role of graphic medicine as critique of the medical profession’ (Venkatesan & Peter 2017; see also Williams 2011). It is not likely that one will ever cry with such empathy over a medical scientific publication, but far more likely that one will be brought to tears over four panels on a page in Czerwiec’s book.