This article favourably reviews Captain America, Masculinity, and Violence: The Evolution of a National Icon (Stevens 2015) and offers some suggestions for further research. The review explores the ways in which the book offers insights into one of the most popular characters in comics and also gestures towards the work scholars of mainstream American superhero comics must tackle in the future.

Reading about successful nationalist superheroes always tells us a great deal about the popular imagination of the country the hero is supposed to embody. As a Canadian with a research focus on Canadian superheroes and representations of Canada in mainstream American comics, the ways in which a fictional construction can stand in for the nation state has always fascinated me (even when the examples my country offers up are often more cringe-inducing than aspirational). So I have always read comics featuring Captain America with more than a passing interest in nationhood and the embodied – almost always male-bodied – values he represents. When I agreed to review Captain America, Masculinity, and Violence: The Evolution of a National Icon by J. Richard Stevens (Figure 1) for The Comics Grid: Journal of Comics Scholarship, I joked that my subject position as an angry Canadian feminist made me the less than ideal reader for this book; in the end, however, Stevens’ careful and critical reading of Captain America against his shifting cultural moment offers not only insights into one of the most popular characters in comics but also gestures towards the work scholars of mainstream American superhero comics must tackle in the future. 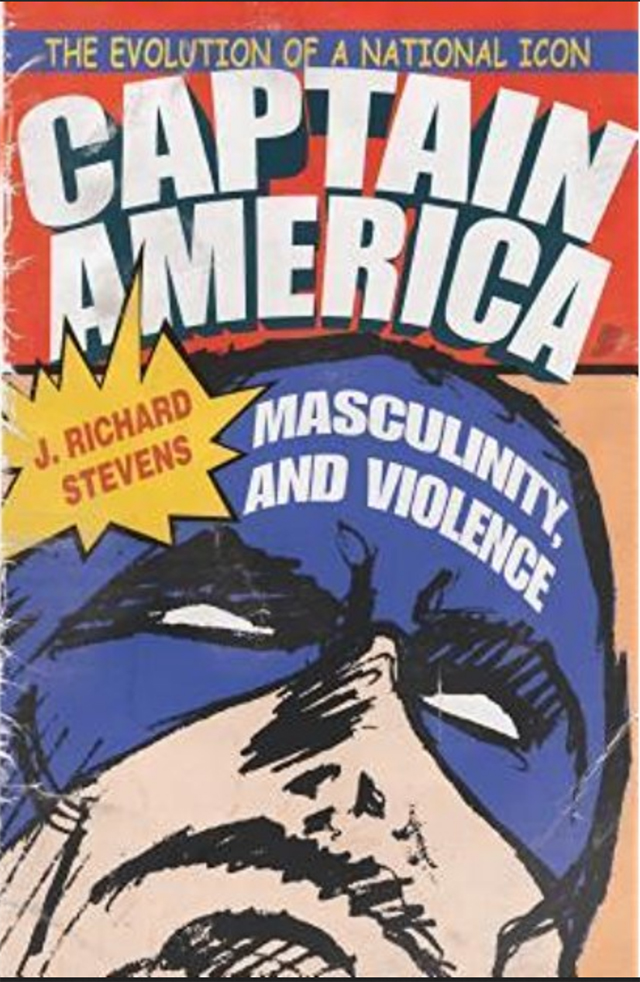 Cover of Captain America, Masculinity, and Violence: The Evolution of a National Icon by J. Richard Stevens (Syracuse University Press, 2015).

The thesis of Stevens’ book is that Captain America’s masculinity, in particular the character’s relationship to violence but also his approach to the social issues of each decade in which he has been published, represents the values he is required to embody as a nationalist superhero; as such, each reimagining or retconning of Captain America suggest something significant about its contemporary society. In other words, Captain America’s relationship to violence shifts with the times: in the 1940s, he thought nothing of actively killing or passively leaving to die his enemies, for example, but by the 1970s his moral positioning precluded such actions. The book draws on the obviously excellent work in the realm of nationalist superheroes by scholars like Jason Dittmer, while also offering a comprehensive overview of major aspects of American cultural studies. Indeed, a key strength of Stevens’ book is his willingness to draw on ideas beyond the world of comics, like for example his particularly productive engagement with John Shelton Lawrence and Robert Jewett’s concept of the American monomyth as well as Richard Hughes’ Myths America Lived By (2004) to suggest why Captain America represents the United States as both “inherently moral” (2015: 31) and “innocent” (2015: 32) even when, in his early titles, he is shockingly violent. The connections here are productive, and it offers an interesting avenue for further study of mainstream American superhero comics more broadly.

Another tantalizing idea Stevens offers is the importance of fandom studies to his work, and indeed to the work of all scholars of mainstream American comics. As he suggests, “To study comic books as cultural expressions is to run headlong into the relationship between fan culture and dominant culture” (2015: 10). It is gratifying to see this acknowledgement, because Stevens does, as many scholars of Marvel/DC Comics do, make use of the lettercols to make larger arguments about the texts and their receptions. Very often, this work is presented without engagement with any kind of scholarship of fandom, so while Stevens allows that his own engagement here is “extremely superficial” (2015: 10), it should remind us all of the value of this work and also suggests a mandatory understanding of it, at least on some level.

The strongest chapter in the book, perhaps because the content itself is the most complex and engaging, is Stevens’ analysis of representations of Captain America in a post-9/11 world; how does history’s most jingoistic superhero respond to such a jingoistic moment in American history? Captain America refuses to be caught up in the nationalist fervour that overtook America in this period, positioning him as more moderate than even the real-world “with us or against us” government. As Stevens notes, choosing to depict Captain America showing more caution than was typical of the times is important because his comics “tend to draw the most attention when American cultural values are under scrutiny” (2015: 221), which is perhaps why this chapter of Stevens’ book is so compelling. Stevens also includes a short discussion of the exceptional seven-issue Truth: Red, White, and Black series (2004) by Robert Morales and Kyle Baker (though as I strongly believe this is the finest use of Captain America, I would have welcomed a longer analysis, particularly from a critical race theory perspective). Academic publishing being what it is, Stevens’ book probably did not cross paths with Kevin Michael Scott’s 2015 collection Marvel Comics’ Civil War and the Age of Terror, but readers of each text will find the other to be a useful companion.

Captain America, Masculinity, and Violence is a good, and occasionally vital, book that makes a meaningful and necessary contribution to the study of mainstream American superhero comics. This longitudinal study of a significant, central Marvel character is intricate and detailed, and the argument is a worthwhile one perhaps especially for the future venues it raises: in its best moments, Stevens reminds us that popular culture is both shaping and reflecting society, and for that reason any character with the staying power of Captain America will have much to teach us about the America(s) he has experienced. Stevens is careful to consider Captain America’s position in each historical moment against the politics of the time, both in terms of institutions (like how well Cap relates to the political leaders of the day) and zeitgeist (each chapter examines Captain America vis-à-vis race and gender issues). Stevens does not shy away from critiquing the problems these comics have historically had with representations of Indigenous, Black, and Asian characters, and with their typically patriarchal worldview. From a feminist perspective, however, I wanted Stevens to address how toxic masculinity, especially in recent years, is dealt with in Captain America’s ever-changing relationship to masculinity. Likewise absent is a contextualization of the male physique in superhero comics as male wish fulfilment, which would have fit comfortably into Stevens’ otherwise thoughtful engagement with the appearance of Cap in Chapter 7. Through the entire book, Stevens could also have more explicitly examined Cap’s masculinity as a specifically white, heteronormative, and cisgendered imagining of masculinity; I occasionally found myself longing for a more careful critique of the concept of masculinity itself in the framing of the argument.

Like many scholars who come to comics from the world of textual analysis, Stevens could stand to pay more attention to the art in the comics, especially because where he does take time to reflect on the images he does a very good job. But too often he omits references to the artists working on specific titles, and to the work of the art on the page. This issue is, of course, not unique to Stevens, but it is worth mentioning and talking about anytime the art is underdiscussed in any work of comics scholarship. Likewise, there are no images reproduced in the text; while this likely has far more to do with the publisher than the author, I am confounded by how many works of comics scholarship neglect to include examples of the work being discussed. Obviously, this is a critique that goes beyond Stevens’ work to the discipline as a whole, but it seems to me imperative that we push against the accepted norms of scholarly publishing in comics studies to demand more equitable treatment of art alongside text.

Overall, J. Richard Stevens has given us a compelling, timely accounting of the history of Captain America, situating the comics and character meaningfully within shifting cultural norms. Given the thoughtful way Stevens approaches his analysis of Cap’s relationships to the Presidents he has served alongside, and particularly Cap’s willingness to critique those whose actions do not live up to the ideal of the American Dream as he understands it, it is hard not to anticipate some future edition Captain American, Masculinity, and Violence that reflects on the Trump era.

Will Captain America’s values survive this particular historical moment, or will the pressure of the times force another reconsideration of Cap’s character by future artists and writers? As Stevens concludes the book: “Though Cap is framed as a leader of public opinion, his values seem to be largely determined by those who read his stories, making him an ongoing artifact of interest to examine” (2015: 294). His book is a welcome addition to this ongoing conversation.

Captain America, Masculinity, and Violence can be bought from Syracuse University Press: http://syracuseuniversitypress.syr.edu/spring-2015/captain-america-masculinity-violence.html.