This article is a review of Graphic Novels for Children and Young Adults: A Collection of Critical Essays, edited by Michelle Ann Abate and Gwen Athene Tarbox (University Press of Mississippi, 2017). Filling a significant gap in current scholarly research in comic studies, the collection will appeal to a wide range of scholars and educators. The review argues that reading this collection is less of a chore and more of a joyful journey of discovery.

My first memory of wanting a comic book was visiting the used book store, which was also a comic book store, and seeing the newly-published Sandman books by Neil Gaiman (1989–2015). They didn’t look anything like the comic books I saw by the drugstore check-out or left out in waiting rooms at the doctor’s office. The covers were evocative and scary, at least to my 12-year-old eyes. I was drawn to them, but too scared to ask if I could buy one. They were mounted high on the wall, and comics and comics culture seemed so far removed from my experiences with reading and literature. I looked at them few weeks when I would show up to sell my old Babysitter Club books (Martin 1986) in the hopes of getting enough money to buy the next one in the series.

Now, I have a PhD in Comparative Literature, and two kids, aged 8 and 10, who are obsessed with graphic novels, including my daughter who is reading the same Babysitters Club series, but this time as graphic novel adaptations (Martin and Telgemeier 2015). The first time my son, years ago, brought me a graphic novel to read aloud to him, I had to admit to him that I didn’t know how, because I had never read comics or graphic novels as a kid (or much as an adult). But I could see my two reluctant readers happily work their way through Zita the Spacegirl (Hatke 2011), Lumberjanes (Stevenson 2015), The Notebook of Doom series (Cummings 2013), and (more recently) Dogman (Pilkey 2016).

My interest, then, in reviewing this book is both academic and personal. I had internalized many of the messages from both my time growing up during a period that was hostile to comic books and studying “serious” literature, which led me, as a parent, not to understand what my kids were reading. I not-so-secretly hoped they would move on to “real” books. But once I started engaging with the graphic novels, I was moved by their humor, thoughtfulness, and complexity.

The collection Graphic Novels for Children and Young Adults (Abate and Tarbox, 2017; Figure 1), reflects the wide variety and deep complexity of these books. The book is helpfully organized into five separate thematic sections, covering everything from the materiality of the books and of comics to issues of gender and identity in 20 original essays. Many kids’ current favorites are all there being critically discussed: Captain Underpants (Pilkey 1997), Diary of a Wimpy Kid (Kinney 2007), My Little Pony (Cook and Price 2012), Drama (Telgemeier 2012), Lumberjanes (Stevenson 2015). Being a novice in this genre, I was introduced to a number of the “classic” texts like Bone (Smith 2004) and Ivy (Oleksyk 2011). The Introduction provides a much-needed history and evolution of children’s and Young Adult (YA) comics. As the editors state, this collection is indeed one of the first extensive academic considerations of the genre. 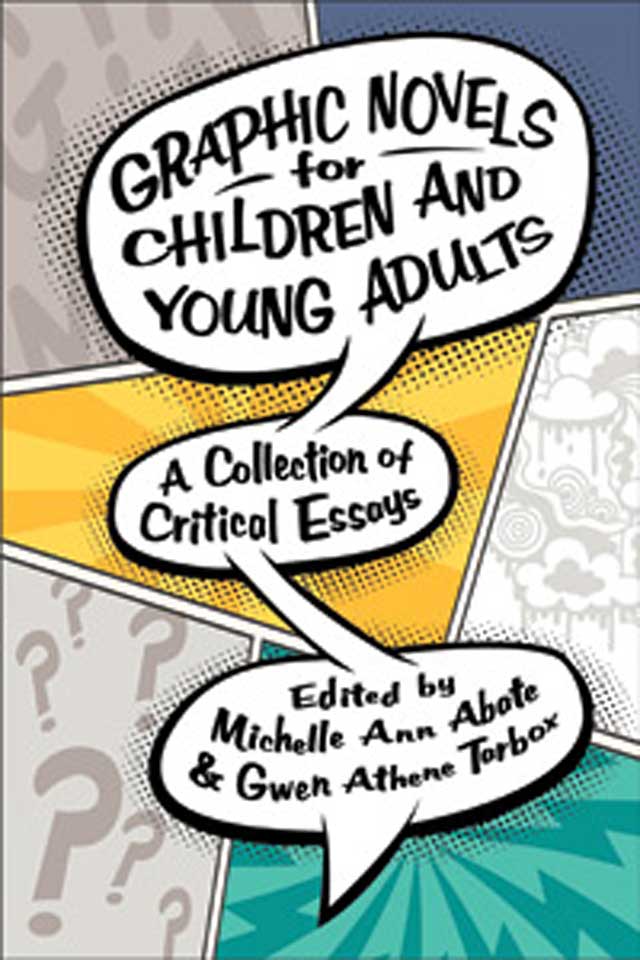 Cover of Graphic Novels for Children and Young Adults: A Collection of Critical Essays (2017) © University Press of Mississippi.

One of my areas of research is adaptation, particularly the telling and re-telling of stories across different mediums, so I particularly appreciated the section on this very question. I also strongly recommend the section “The Pedagogy of the Panel: Comics Storytelling in the Classroom,” to any English or Language Arts teachers and literacy professors. These chapters represent an important contribution to this particular subfield, as well as a much-needed antidote to the idea that graphic novels get kids interested in reading so they can eventually “graduate” to read “real” books.

My own children have been actively encouraged to “move past” graphic novels into traditional books by teachers, and it is a phenomenon identified by Gwen Athene Tarbox in her essay in the collection “From Who-ville to Hereville: Integrating Graphic Novels into Undergraduate Children’s Literature Course” (Abate and Tarboc 2017: 141). Tarbox’s essay in particular, on teaching YA Graphic Novels in an education course, is one that is a must-read, pointing to the importance is national guidelines to develop children’s “visual literacy” as well as different ways of making meaning.

The strongest essays in the collection connect to the work(s) being discussed in a highly personal way, much like I did in my own introduction to this review. This is the positionality most of our kids and students will be taking, and perhaps even ourselves, when engaging with YA graphic novels and comics: nostalgically, enthusiastically, but most likely never indifferently. This should be more common in academic writing about anything, but particularly well-suited to this genre. I, for one, appreciated the approach, and it communicated an interest and enthusiasm for works that I was wholly unfamiliar with. As a reviewer, I had to read every essay, but the process was less of a chore and more of a joyful journey of discovery.

If I had one criticism of the collection is the lack of reproductions of some of the pages and images described in the text. It is strange to read about the importance of the materiality of the graphic novels and comic books without being able to actually see an example. One essay makes reference to a figure/image that is missing from the chapter. I am sympathetic to the issues of copyright and permissions, and the costs associated, but when so much of the message, so to speak, is contained in the images and layout, it would better serve the reader to be able to see what the authors are describing.

That one criticism aside, this book is an essential addition to any scholar studying and/or teaching comics and graphic novels, as well as for literacy and language arts professors/professionals. As pointed out by scholar Nicolas Labarre in his comic —“Invisible Comics” in reference to YA graphic novels, these books are largely ‘invisible’ to the larger scholarly community around comics, including himself (Labarre 2018). He provides a valuable (if short) bibliography which includes this volume at the top of the list. These YA comics and graphic novels are the works that our students will be or have been reading, and as we increasingly celebrate YA fiction more generally, we should also not ignore how these trends are influencing comics.

Graphic Novels for Children and Young Adults: A Collection of Critical Essays can be bought directly from the University Press of Mississippi at http://www.upress.state.ms.us/books/2025.