As many as half of the new teachers who begin each year will leave either the school or the profession of teaching within five years. In underperforming districts and in schools with low resources, the retention among teachers is even worse (Ingersoll, 2010; Ingersoll & May, 2011). This comic examines a group of early career teachers; their experiences demonstrate the challenges and opportunities that are the reality for many new teachers entering high needs schools. The major themes that were uncovered included culture, success and failures, and work satisfaction. We conclude that the use of the comic representation is important in conveying the thoughts and feelings of these teachers.

The purpose of this study is to look closely at the experiences of beginning teachers. In the United States there is a long-standing discussion about teacher retention. As many as half of the new teachers who begin each year will leave either the school or the profession of teaching within five years (Ingersoll, 2010; Ingersoll & May, 2011). The teachers interpreted in this work have made a conscious decision teach in “urban” rather than “suburban” schools. They are making a choice that is less common and likely to be more challenging. The teachers in this work are all novice teachers working in historically underperforming schools. To be sure, these high needs contexts are some of the hardest to staff and some of the places where we see the most transitions, either out of the schools or out of the profession altogether. This comic is an opportunity to listen to their experiences and thought processes as they navigate this transition.

The teachers represented in this work give voice to some of the challenges and opportunities new teachers face. Teachers are at once hopeful and hopeless, inspired and beaten down, assured in their career path and considering leaving. The comic attempts to show the competing voices that can both sustain us in the face of challenge or incite a wave of doubt about the future. In many ways this is a portrayal of normative development – the way we all develop our sense of who we are. Spencer’s Phenomenological Variant of Ecological Systems Theory [PVEST] (1995) helps to explain the dynamic bi-directional influences between teachers’ self-appraisal processes and risks and the way they cope and form identities. In this model stress and vulnerability influence how one copes with challenges and the coping strategies employed influence identity formation. The comic attempts to elucidate the internal processes at work in forming a new identity as a teacher.

As we continue the conversation about how best to support new teachers and by extension provide the best possible opportunities for our students, we must listen to those who are in the classrooms. How can their direct experience help inform how we support their desire to become a teacher, remain a teacher, and be a great advocate for children?

Data for this work were collected from novice teachers who had all graduated from the same urban education program at a small liberal arts college in the Northeastern, United States. The urban education program is focused on preparing teachers who want to work in historically underperforming schools with limited resources. The preparation program requires candidates to engage in critical self-reflection, challenge bias they may have, and prepare to respond to inequities in classrooms and schools. While the teachers are in school, those practices and beliefs are fully supported. However, when they are out in their own schools and classrooms they sometimes are confronted with viewpoints that differ and even conflict with the ideas they bring to their new career. These conflicting viewpoints can sometimes create a borderland where teachers need to try to square what they have been taught with what they believe and what they are experiencing. These challenges to one’s core values have the potential to undermine a teacher’s professional identity (Delaney, 2015).

Data were derived from semi-structured interviews and classroom journals. The interviews sought to capture the thoughts and feelings of the teachers as they make the transition from school to their career as a teacher. They responded to queries about finding a job, successes in the classroom, and challenges they face. The second data source were the classroom journals generated as part of the reflective process when the teachers were still in the teacher preparation program. The journals were part of coursework that required processing ideas related to critical pedagogy and field work in which they were engaged. Both the content of the journals and transcriptions of the interviews were used to generate the dialogue in the comic. All necessary permissions were secured via our Institutional review board at the author’s home institution and all names found in this text are pseudonyms.

The study utilized a phenomenological approach (Reid, Flowers, & Larkin, 2005). This approach allows the analysis to focus on the subjective experiences of the participants and the ways in which they interpret their experiences (Dell’Angelo, 2016). The analysis included an inductive coding process that yielded the themes and big ideas that were retained for the text of the comic. Additionally, the codes that were generated were used to reduce the twelve teacher participants to four composite characters who appear in the comic. Each character represents a disposition toward their circumstance – idealism, cynicism, pragmatism, and realism. In truth, all the teachers interviewed expressed a variety of ideas and opinions. Sometimes in the same interview there would be expressions of idealism and cynicism and the like. But, for the sake of the comic, composite characters were created that represent each distinct approach to coping with the realities of being a new teacher in a challenging context.

The major themes that were uncovered included culture, success and failures, and work satisfaction. Each of the four characters encounters opportunities and challenges related to these themes from a different perspective. The use of the comic representation is important in conveying the thoughts and feelings of these teachers. As Sousanis argues, “images are not subordinate to words, but equal partners in the articulation of thought” (Finch, 2015). 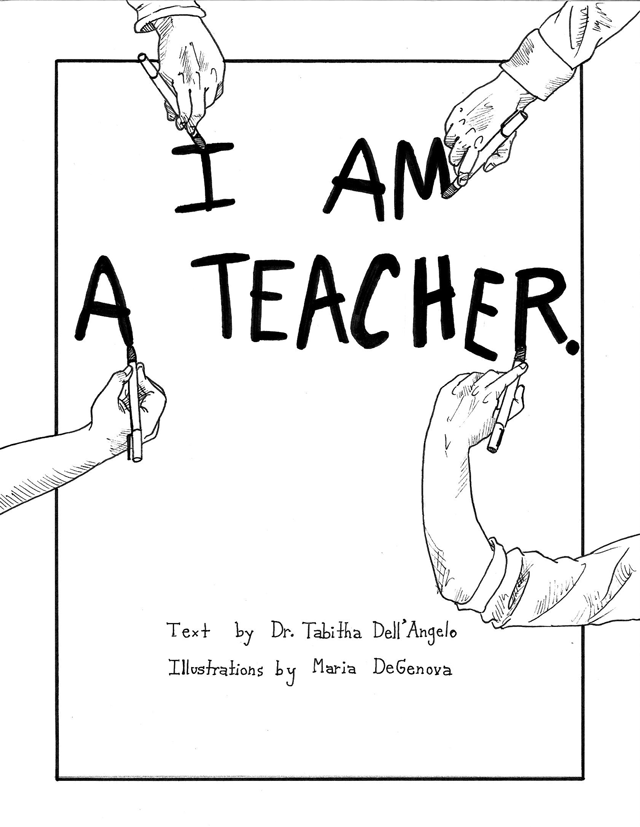 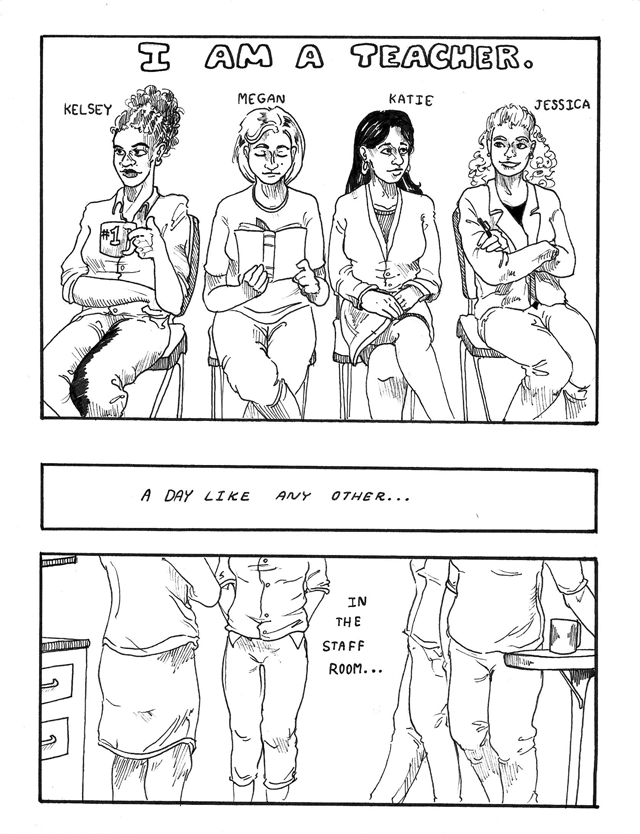 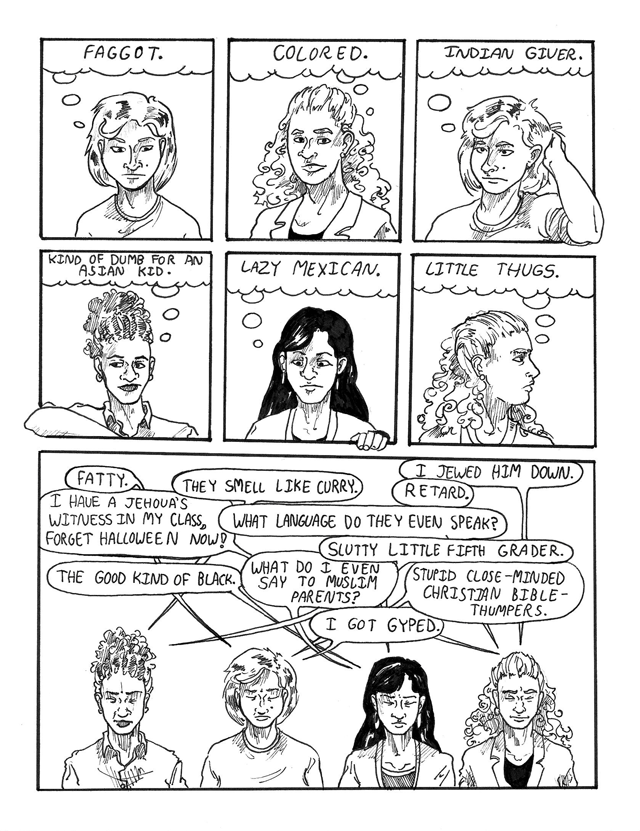 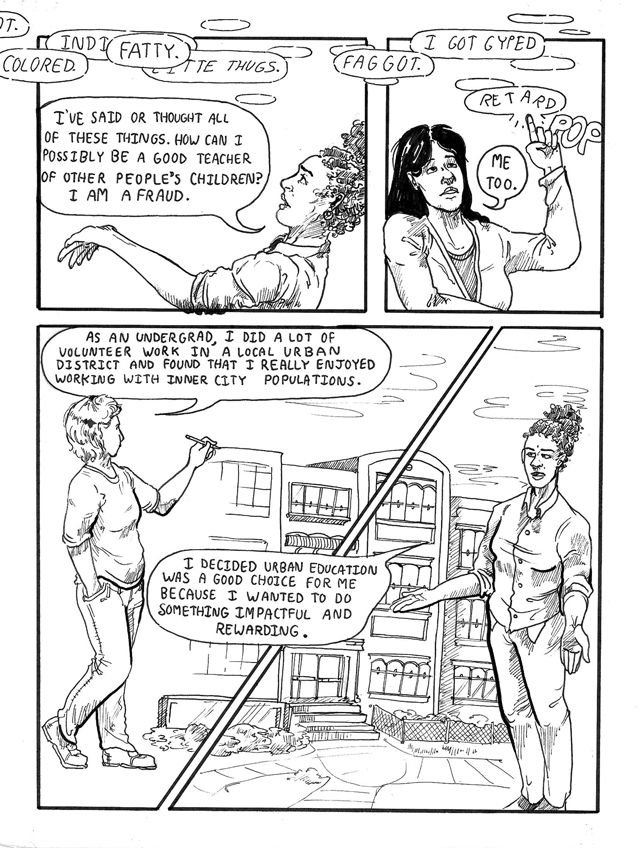 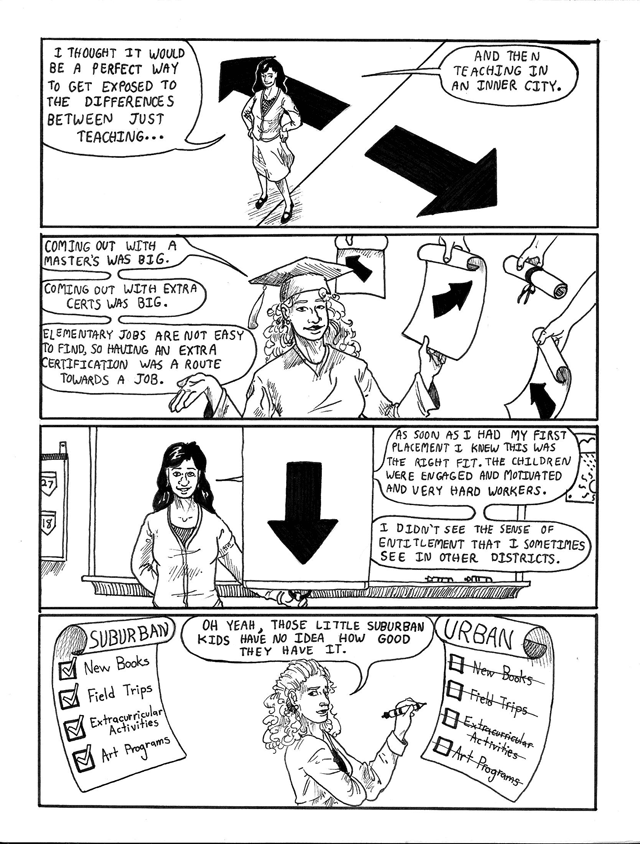 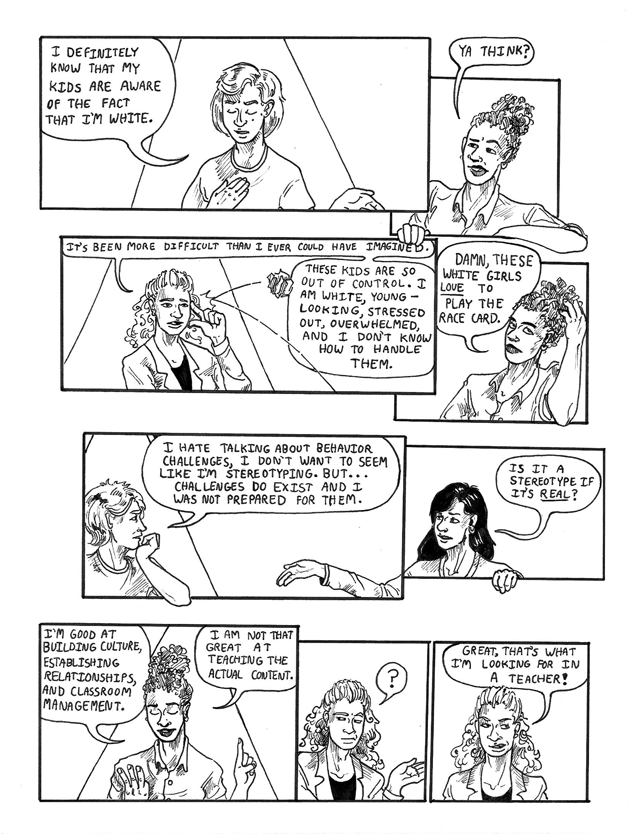 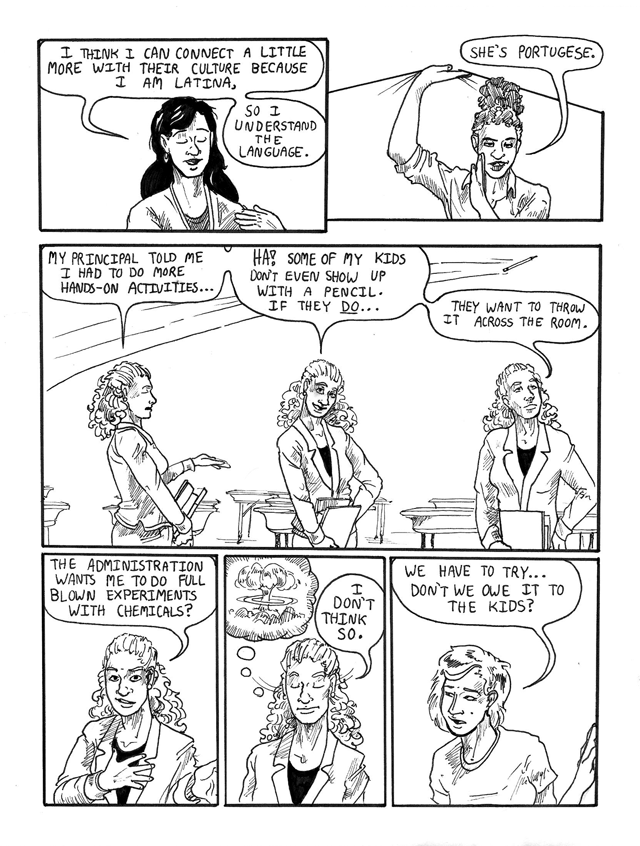 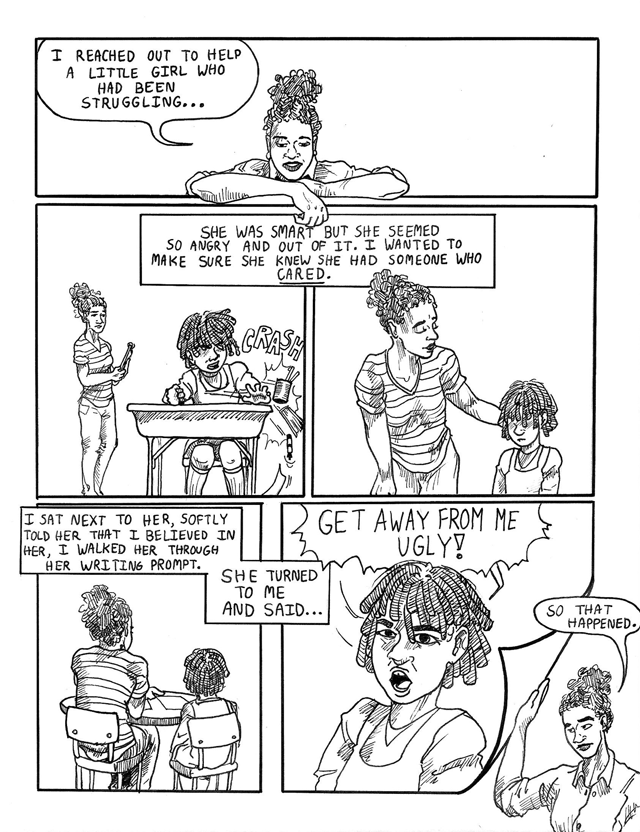 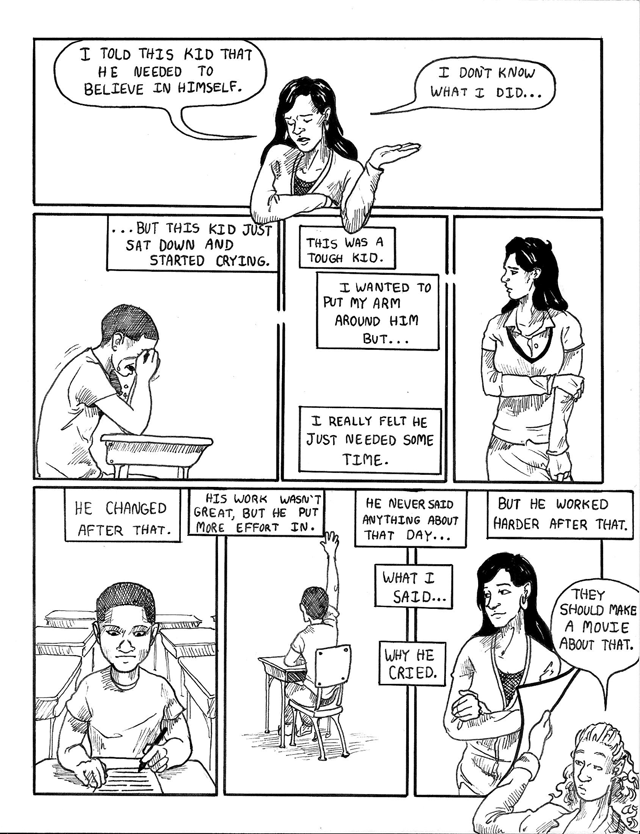 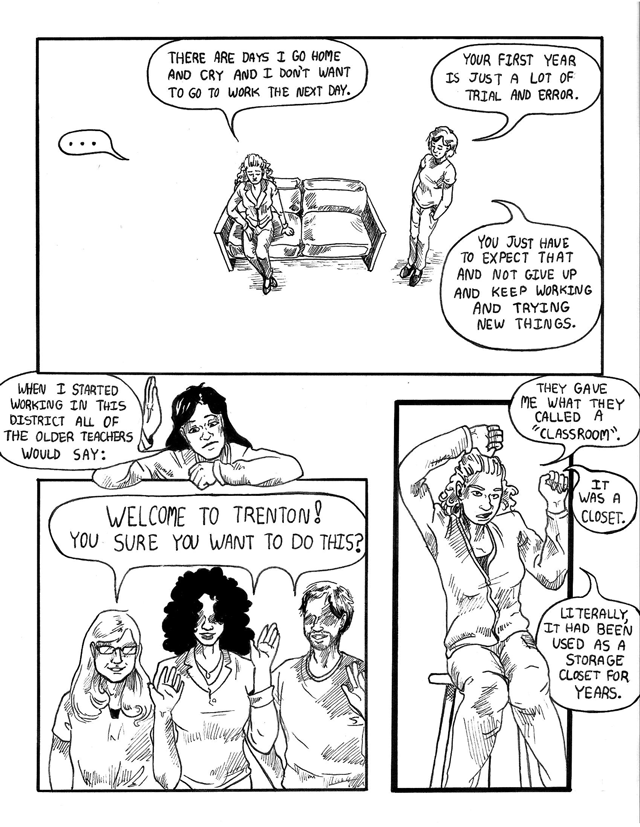 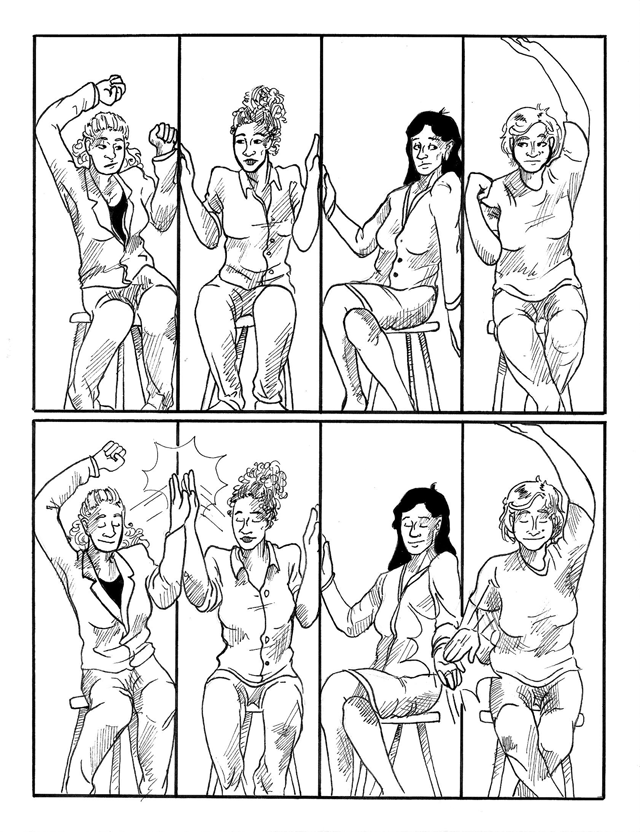 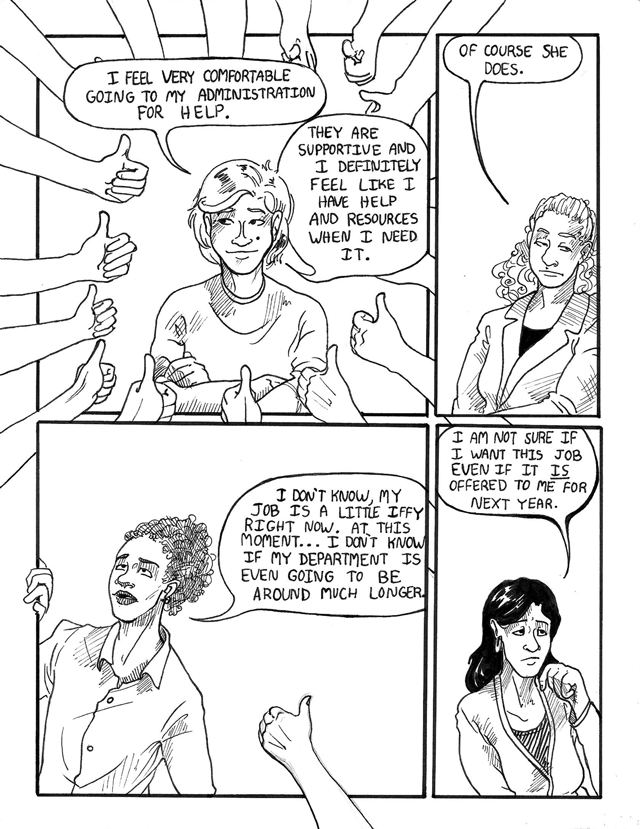 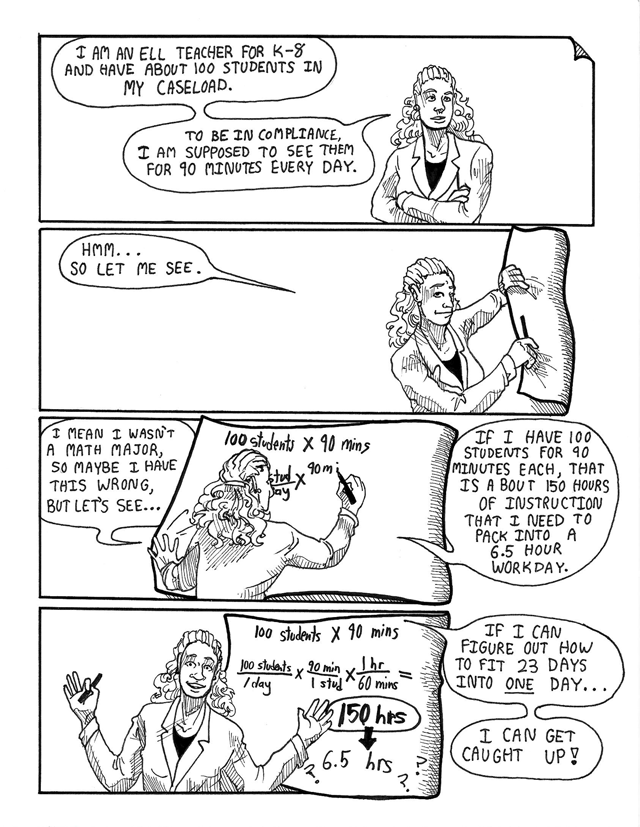 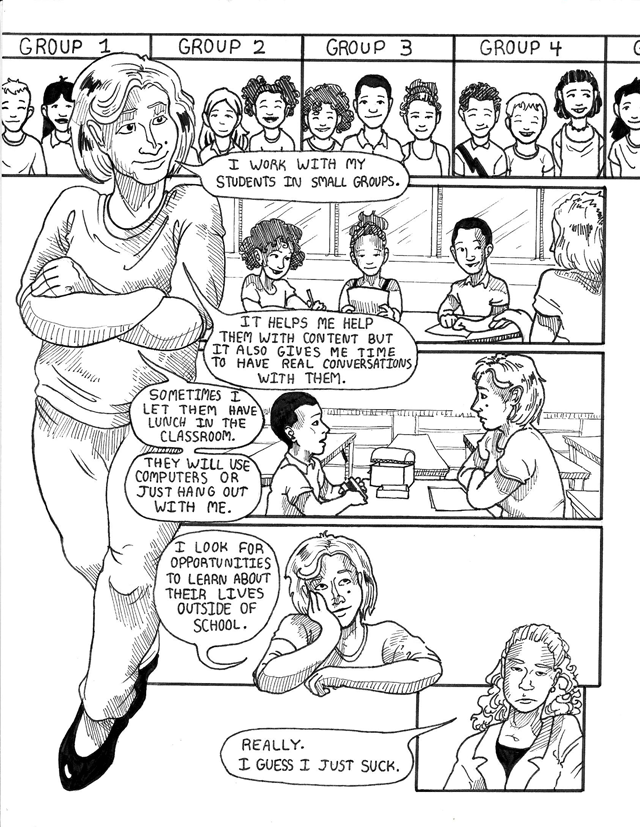 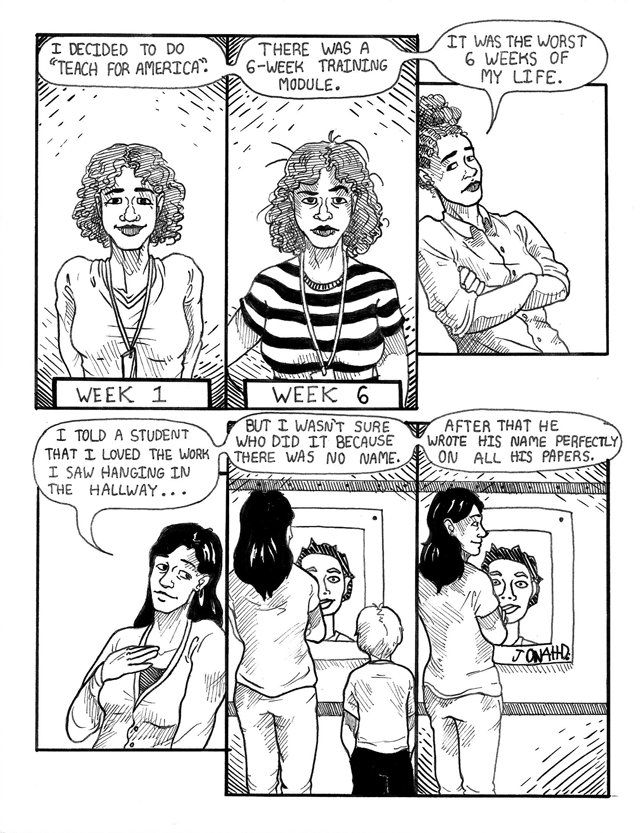 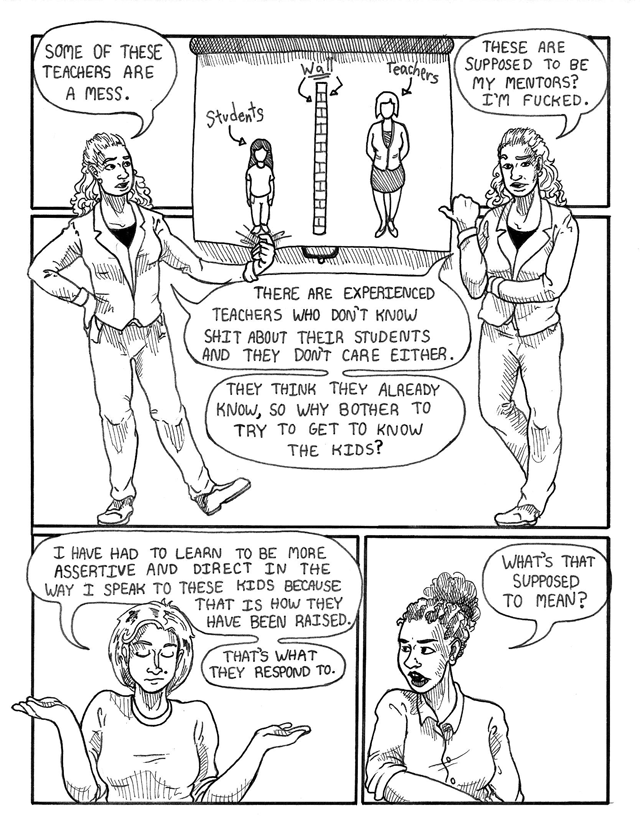 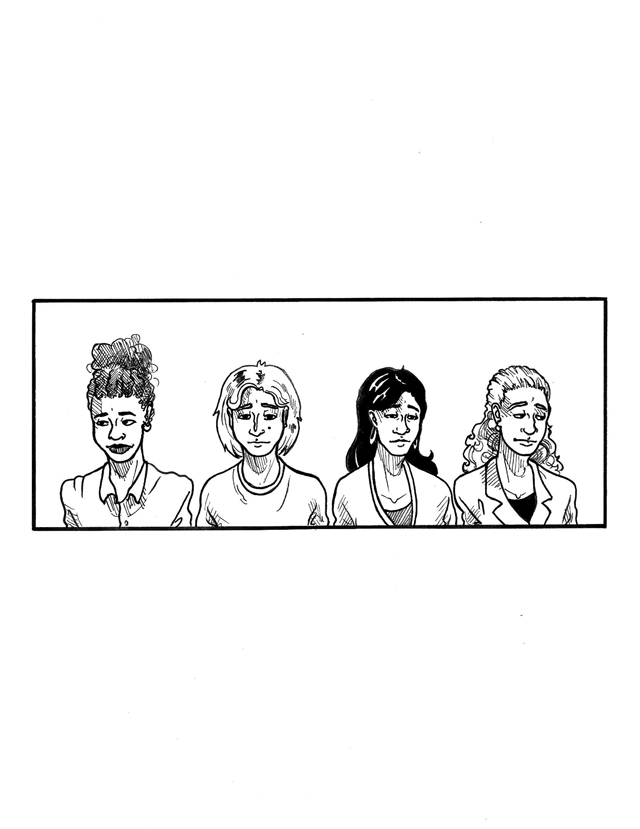 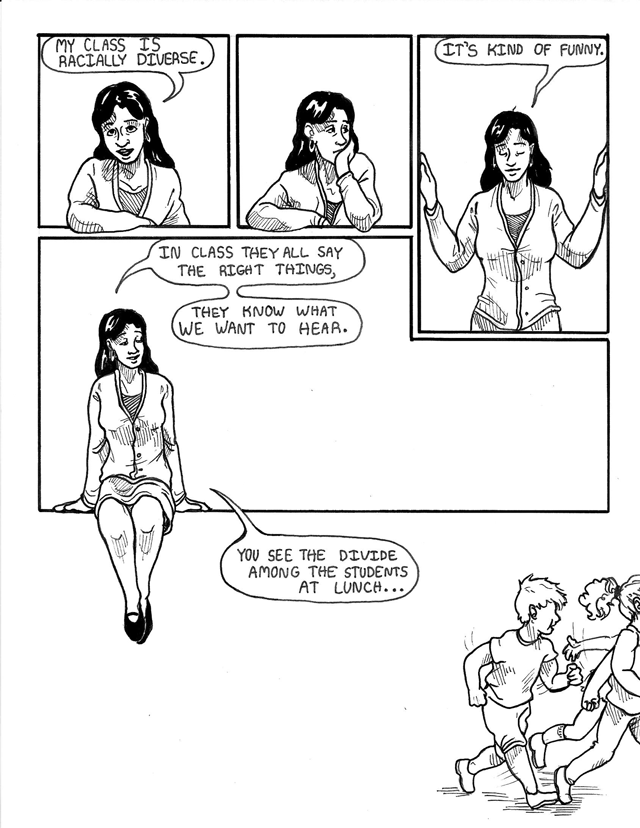 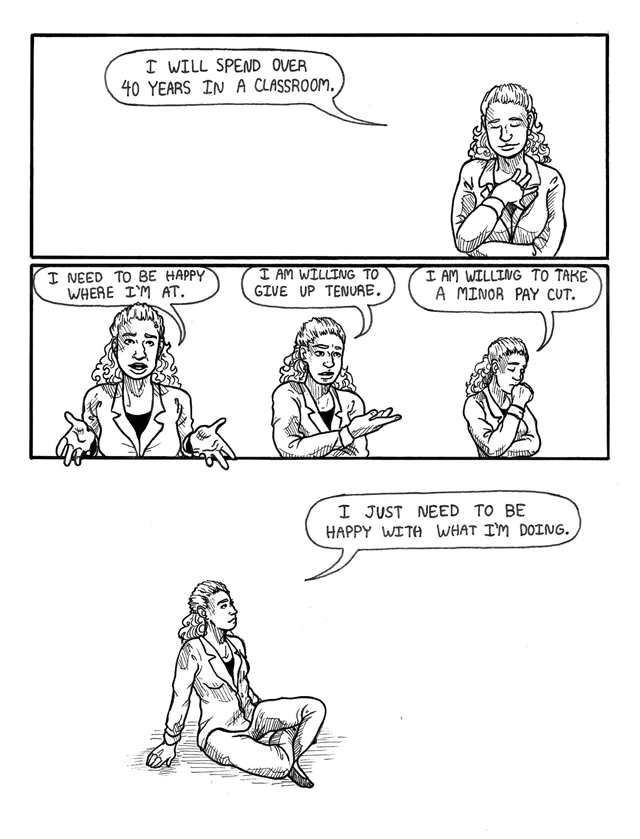 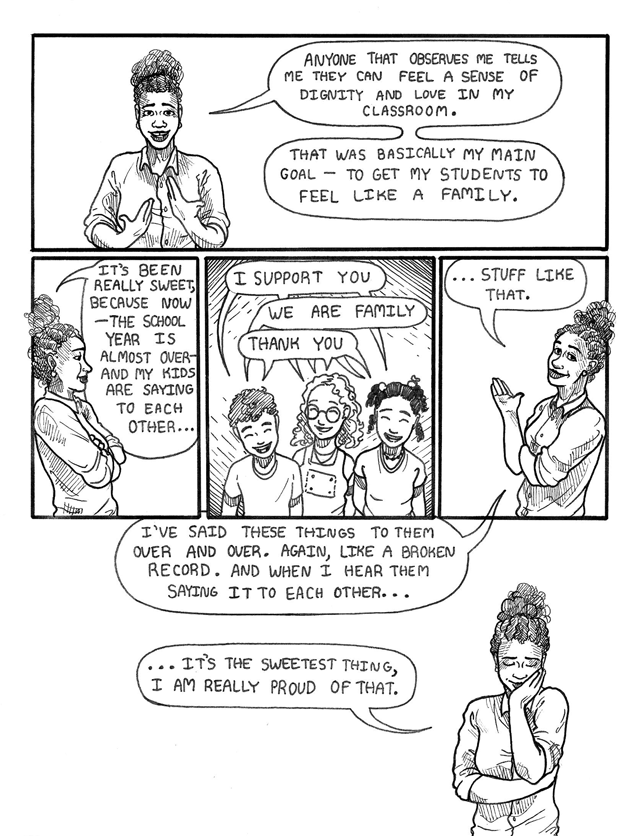 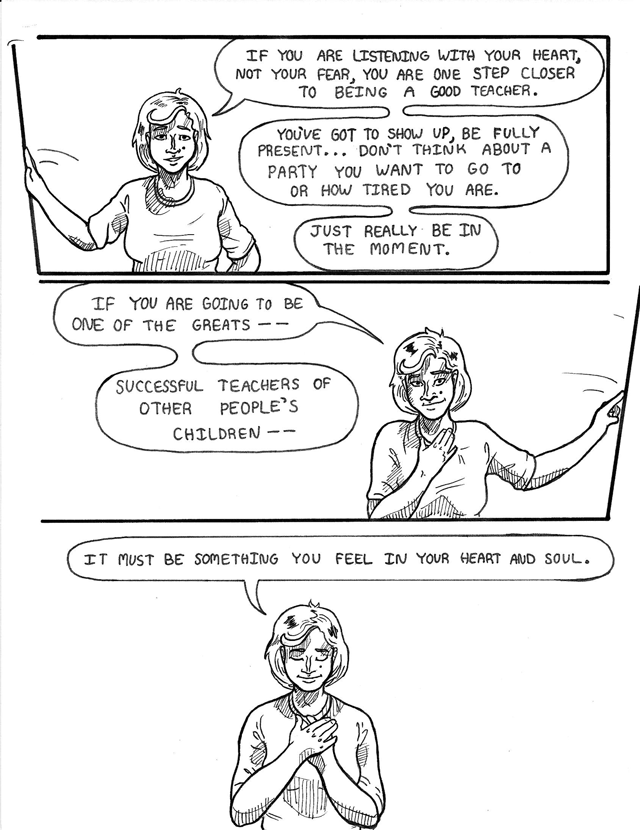 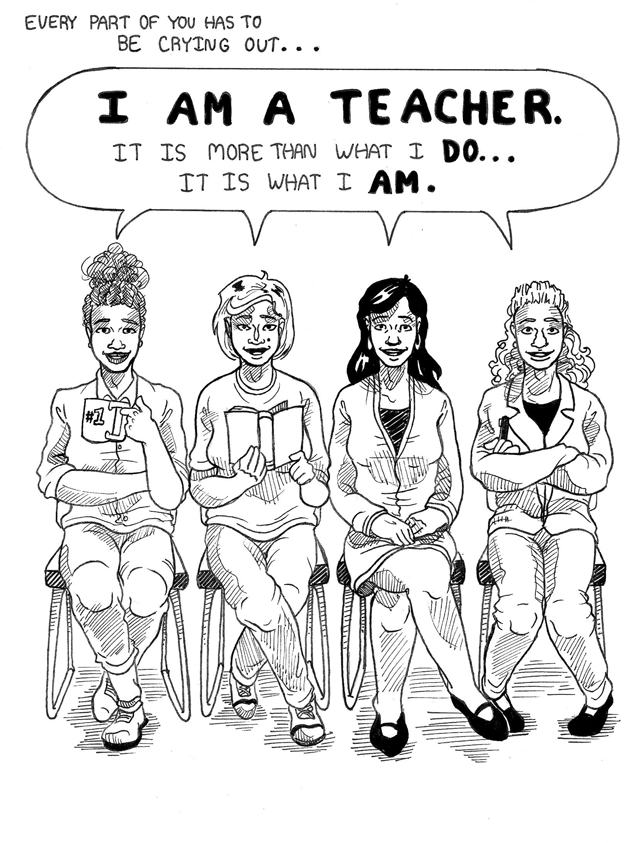 This article is part of the Graphic Science Special Collection, edited by Nicolas Labarre and Ernesto Priego. This piece was peer-reviewed by Mike Cook, Benoît Crucifix, Moss Pike and Nicolas Labarre.

The authors have no competing interests to declare.