Stephen Tabachnick’s edited collection The Cambridge Companion to the Graphic Novel (2017) is reviewed in light of the graphic novel’s relevance for contemporary literary studies. This review gives a special focus to the terminological debate surrounding the term ‘graphic novel’ and what that debate can mean for the field of literary studies as a whole.

Murel, J., (2018) “On the Significance of the Graphic Novel to Contemporary Literary Studies: A Review of The Cambridge Companion to the Graphic Novel”, The Comics Grid: Journal of Comics Scholarship 8, 15. doi: https://doi.org/10.16995/cg.138

If you don’t take graphic novels seriously, then you don’t take contemporary literature seriously. At least, so claims The Cambridge Companion to the Graphic Novel (2017; Figure 1) in its introduction: ‘Anyone interested in important contemporary reading material simply cannot ignore the graphic novel,’ and the whole of what follows in this edited collection aims towards justifying that claim (Tabachnick 2017: 3). The included essays explore a variety of topics related to current graphic novel studies, from ‘its techniques, the history of its development and acceptance, and the influence of important international cultural traditions, as well as subgenres, adaptations, and related pedagogy’ (3). From Randy Duncan and Matthew Smith’s essay on the comics form at large to James Bucky Carter’s concluding chapter on teaching the graphic novel, this edited collection, much like the graphic novel itself, covers a variety of methods and issues. 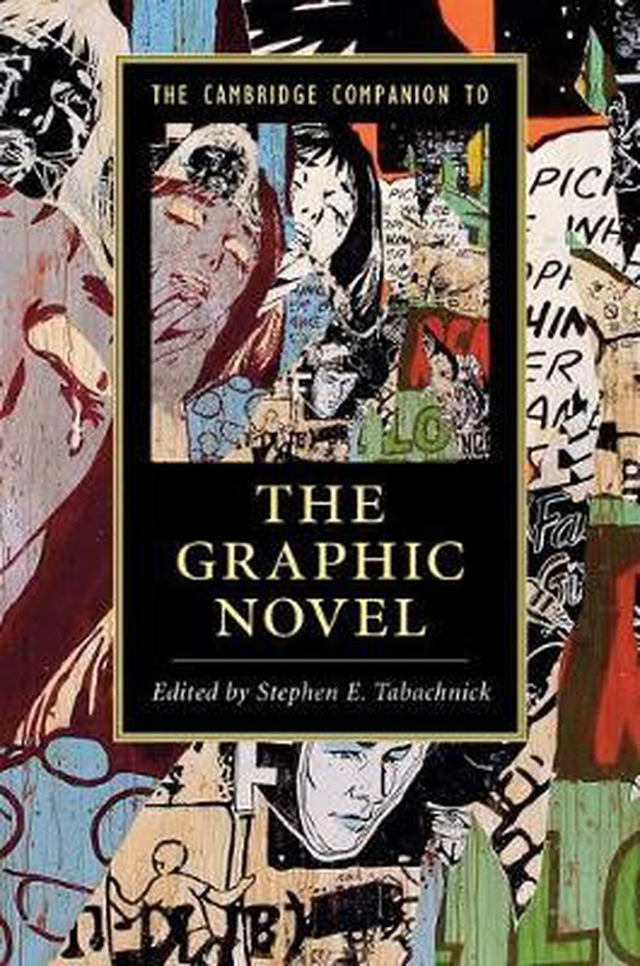 So inclusive a critical blanket runs the risk of losing depth for the sake of breadth, but the collection plays that to its advantage. The back cover abstract promulgates the book as a ‘key resource for scholars, graduate students, and undergraduate students alike.’ None of the essays offer field-shattering insight on the main issues plaguing contemporary comics studies (e.g. developing a comprehensive comics narratology, the panel as temporal mapping, text-image relation, etc.), but that in no way means they are banal, trite, or ill researched. Their scope is wide, their detail, exact, and such comprehensive knowledge makes the book an excellent resource for any new to the field of comics studies, from the tenured non-comics professor to the wide-eyed undergrad. This collection’s broad critical survey makes a fit introduction and summary resource for historical and thematic graphic novel trends, as well as the main issues in contemporary scholarship.

For instance, the collection’s first essay ‘How the Graphic Novel Works’ overviews comics taxonomy through four of comics’ major narratological units, the panel, sequence, page, and narrative. Under ‘The Sequence’ section, Duncan and Smith write, ‘When two panels are situated, or juxtaposed, next to one another, the space between the panels creates what is called a gutter… each gutter presents a transition, some more subtle than others, that the reader must negotiate’ (Tabachnick 2017: 18). This is bromide to the seasoned comics scholar, but it’s not intended for them. The included essays don’t challenge the critical status quo so much as they summarize the critical and historical landscape. As with many in the Cambridge Companion series, the volume is compendious. Students, those new to the field, or any in need of an easily accessible critical overview will undoubtedly benefit from this volume.

Not only the individual essays, which cover topics from historical (non-)fiction to superheroes to pedagogy, but the book as a whole exemplifies some of the core issues proliferating comics studies, not the least being the debate around the term graphic novel, an issue on which this collection’s contributors differ. Many comics scholars see this term as symptomatic of larger class politics in American academia culture: ‘The cheap way of referring to them is ‘comic’ or ‘comic books’; the fancy way is ‘graphic novels’ (or ‘graphic narratives’ or ‘sequential art’). Whatever you call them marks you as a product of an ideology’ (Wolk 2007: 61). Much like Wolk, cartoonists/graphic novelists Art Spiegelman and Chris Ware see graphic novel as empty rhetoric aimed to make the medium more ‘respectable’ among adult American audiences (qtd. in Chute 2014: 219). The debate resonates with the largely dissipating distinction between film and movie.

Some of the contributors clearly appraise the graphic novel above traditional comic books. For example, in the volume’s first historical essay, editor Stephen Tabachnick begins, ‘The graphic novel has little in common with traditional comic books,’ and goes on to identify this superiority in its being ‘thick as regular prose books… printed on better paper with better ink,’ its exploration of ‘serious non-fictional historical and political issues… often autobiographical or biographical’ while being ‘freed of all [commercial] restrictions on form and content and capable of tackling all of the issues that writing and art for adults have always dealt with’ (Tabachnick 2017: 26). Here, Tabachnick overtly promulgates the graphic novel as sophisticated ‘comics for grown-ups,’ a term Hillary Chute employs to express similar sentiments in her most recent book Why Comics?: From Underground to Everywhere (Chute 2017: 9—21). In this way, Chute and Tabachnick (I prefer to think, unintentionally) buy into the common American assumption that traditional comic books are children’s fare, with the graphic novel being a sort of messianic Trojan horse capable of endowing sophisticated, literary ideals into the gross pond of comics commercialism—as though graphic novels are in any way free from commercial constraints.

On the opposite end of the terminological spectrum, Bart Beaty’s essay ‘Some Classics’ suggests graphic novel may be a detrimental term, not only indicative of latent class politics, but inhibiting the field’s critical potential. Resonant with Hannah Miodrag’s Comics and Language (2013), Beaty understands the use of graphic novel and the wide adoption of literary critical methods as forcing the comics medium into a traditional literary framework ‘by positioning the literary as a marker of quality and by treating the visual as subsidiary in any formal analysis’ (Tabachnick 2017: 175). For Beaty, the distinction made by the pro-graphic-novel crowd hampers comics studies with the same issues that previously plagued literary criticism, e.g. the elitist division of what does and does not qualify as canonical. Reducing this text-image hybrid known as comics to the narrowly defined graphic novel prevents the medium from becoming ‘an area that will provide new and invigorating forms of scholarship that transcend artificial distinctions between visual/literary, high/low, national/transnational’ (187).

James Bucky Carter’s concluding essay ‘Learning from the Graphic Novel’ locates a similar potential in teaching the graphic novel, declaring, ‘comics-making is an essential part of any and every comics course’ (205). Contra the ubiquitous division between composition, literary studies, and creative writing programs, for Carter, theorizing and critiquing the graphic novel cannot be divided from creating it. In this way, not only does this collection exemplify the graphic novel’s creative potential regarding matters of (auto)biographical and historical representation, but also the potential for its scholarship to challenge dominant divisions in literary studies. In the end, the book delivers. Between the internal disputes Rita Felski terms the Method Wars and what others find an attack on the humanities at large, this essay collection proclaims the literati cannot afford to overlook the graphic novel. Indeed, for Beaty and Carter, its surrounding terminological debate may hold salvific potential in these dire times.

The author formerly completed his Master’s thesis at University of Memphis where Stephen Tabachnick currently teaches.