This review discusses the contents of the edited collection Comics and Adaptation (edited by Benoît Mitaine, David Roche and Isabelle Schmitt-Pitiot, translated by Aarnoud Rommens and David Roche, University Press of Mississippi 2018) and comments on the translation of the text. The review concludes that this is a timely and useful collection which challenges some of the presuppositions of adaptation studies.

Given current Hollywood tendencies toward making superhero movies, adaptation should be something that is obviously linked to comics: after all, comics are adapted all the time into films, cartoons, toys and so on. Yet the scholarly literature connecting comics and adaptation is quite scant: there is the collection Film and Comic Books (Gordon, Jancovich and McAllister 2007), which deals with the connections between films and comics, and there are individual case studies of adaptations into or out of comics in journals and books, but it doesn’t feel like there is a critical mass of work discussing how comics are both adapted into other media and also adapt texts from other media.

Benoît Mitaine, David Roche and Isabelle Schmitt-Pitiot’s edited collection Comics and Adaptation (Figure 1) brings together scholars working on adaptation and comics and gives this area of scholarship a key reference point. Originally published in French by Presses Universitaires Blaise Pascal in 2015 (as Bande dessinée et adaptation), this translation is published by the University Press of Mississippi, which has published some of the most interesting writing on comics in recent decades, including translations of Thierry Groensteen’s work (Groensteen 2007, 2013). It’s good to see a collection of predominantly French scholars being translated into English, especially given how French and American comics traditions differ and the distance between comics scholarship in French and English. 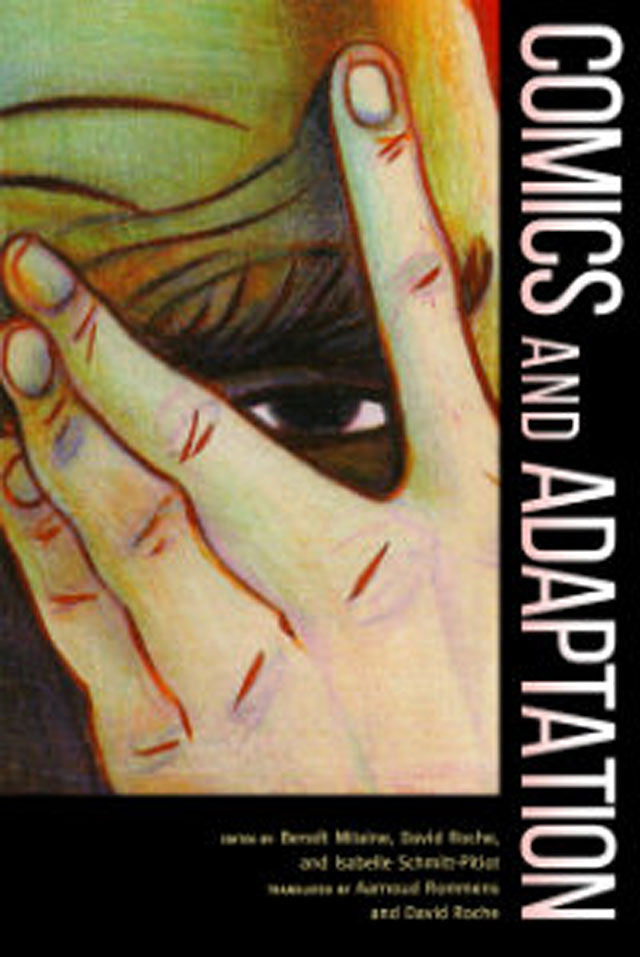 The collection seems like a move towards an internationalisation of comics studies, which was a trend mentioned in the introduction to the recent Routledge Companion to Comics (Meskin, Cook and Bramlett 2017: 2), and this is to be welcomed as it is all too easy for scholarship in other languages to fly below the radar of English-speaking readers.

The book consists of an editors’ introduction and two sections. The first of these focuses on the adaptation of literary texts into comics and the second focuses on the adaptation of comics to film. The introduction does a great job of contextualising the collection in relation to current work in adaptation studies and comics studies. Its overview of the movement from fidelity to intertextuality in the research on adaptation will be useful for readers who are not so familiar with the ways in which adaptation studies has developed over the last twenty or so years, and especially since Linda Hutcheon’s A Theory of Adaptation (2006), which questioned the discourse of fidelity in productive ways. Roche, Schmitt-Pitiot and Mitaine also cover questions such as ideology and logophilia (the preference for words and writing over images) and how they affect comics adaptations.

Jan Baetens’s contribution, ‘Adaptation: A Writerly Strategy?’ (31–46) is more theoretical than its placing in the book’s section on literary adaptation in comics would suggest. Arguing against binary notions of adaptation that privilege ideas of original and version, Baetens proposes a more processual model of adaptation. In other words, he argues that adaptation is a continuous process, with texts continuously adapting other texts. Some of his positions come close to reformulating adaptation as influence – he cites Borges’s idea that the author creates their own precursors (32) – but this approach seems closer to the transmedia world of convergence that we live in, where it’s actually hard to know whether a film or a book or a comic or a toy or a video game came first, and where whole series of objects are often conceived of as part of the same media franchise. Baetens discusses Yves Tardi’s adaptations of Léo Malet’s detective stories featuring Nestor Burma as a form of adaptation. When the artist changed to Emmanuel Moynot, he had to adapt not only Malet but also Tardi in his own versions of the texts. Another example is Simon Grennan’s work where he draws a continuation of one person’s comics in another artist’s style (Baetens specifically mentions Art Spiegleman’s Maus as drawn by Jim Medway). These rethinkings of adaptation move the discussion away from the canonical dyad of text-film or literary text-comic and towards conceptualising adaptation as a more fluid state.

The other five articles in this section take a more conservative line than Baetens, focusing in on specific case studies where there are still clear adapted texts (originals, source texts) and adaptations (versions, target texts). However, all of them challenge the notion of fidelity and explore how the comics version enlarges and explores the original through the process of adaptation. Thomas Faye’s chapter explores the Spanish comic version of the epic Poema de Mio Cid with reference to markers of orality and the character of El Cid. Nicolas Labarre analyses the comic adaptation of Ray Bradbury’s ‘There Will Come Soft Rains’, which cites two thirds of the text (69) and which lacks human agents in the narrative. The adaptation therefore seems to just add illustrations to the narrative, but these illustrations are themselves complex and ambiguous (81) and they effectively add a commentary to the original story. Christophe Gelly’s contribution focuses on Tardi’s 120 Rue de la gare, an adaptation of the novel by Malet, which he argues is productively distanced from its source text and influenced by the development of noir comics in the intervening years. The first half of the essay analyses how Tardi achieves that distance through the adaptation, by for example incorporating aspects of his own style and references, which makes the adaptation as much his work as Malet’s.

Laura Cecilia Caraballo’s chapter analyses the formal aspects of Mattoti-Kramsky’s Doctor Jekyll and Mister Hyde, focusing on the blurring of the figural and non-figural in the text. Likewise, Benoît Mitaine analyses the multiple adaptations taking place in El hombre descuadernado, which adapts Maupassant’s short story ‘The Horla’, focusing first on the adaptation of the narrative before juxtaposing the written text with the images.

Where the first section analysed literary adaptations by comics, the second section analyses (with one exception) the filmic adaptations of comics. Alain Boillat and Dick Tomasovic both tackle Hollywood adaptations of comics in their respective chapters. Boillat analyses the ‘comics effect’ in super hero movies; that is, the way in which Hollywood comics adaptations tend to use CGI animation and other means to make the image on the screen look like a comic book, through for example the use of freeze frames or the use of speech bubbles. These techniques index the comic book origins of the stories, highlighting the intermediality of the film and the process of adaptation. Tomasovic also approaches the question of intermediality, discussing the interconnections between Marvel’s film wing and its comics publishing, arguing that the films have come to influence the aesthetics of the comics (159), as well as connecting both to merchandising. These two essays demonstrate the complexity of using the term ‘adaptation’ for comic book movies, which are part of a larger transmedia ecology that includes comics and other media texts.

Jean-Paul Gabilliet’s chapter analyses the film of Fritz the Cat, paying particular attention to the way in which the film differs from its source and offers quite different ideological positions. Gabilliet uses the concept of ‘fidelity’ to help frame this discussion, but the essay itself is more nuanced than this framing supposes and uses the differing context of the counter culture in the early 1960s of the comics and the early 1970s of the film to help explain the differences. Philippe Bourdier’s discussion of the film version of Corto Mortese in Siberia (originally published in 1979) also homes in on the historicity of the adapted version, referring to the filmic context in which it was produced in order to contextualise some of its features. It then moves on to a more semiotic approach to the film and analyses artistic choices. Pierre Floquet’s chapter on Sin City argues that the film’s use of comics aesthetics – a strong instance of Boillat’s ‘comics effect’ – blurs genre boundaries between film and comics.

The final chapter by Shannon Wells-Lasagne takes a slightly different tack and analyses a more Borgesian mode of adaptation: the comics based on fictional novelist Richard Castle’s novels, seen in the ABC TV show Castle. In other words, it’s an adaptation of a text that doesn’t exist, except for in the fictional world of Castle. So there isn’t really a source text. The comic instead pastiches the sort of novel that Castle would write: a police procedural. Here adaptation blurs into transmedia convergence and the notion of franchising, which is also connected to the Marvel and DC universes as well as other contemporary media products. Wells-Lasagne sees the uniqueness of Castle in its self-awareness (224) and the way it plays with expectations of merchandising.

Comics and Adaptation is a welcome addition to the work on both comics and adaptation and is valuable reading for scholars in either area. The case studies all offer an original approach to the text, though I found those that tried to escape the confines of a binary approach to adaptation, as Baetens suggested, more interesting and successful. It’s also nice to see here case studies that I was unfamiliar with and a willingness to look across linguistic boundaries, while at the same time touching on the more obvious English-language examples. The discussion of literary adaptation in comics is welcome, too: it reminds readers that comics also adapt other texts for a number of reasons.

There were a number of frustrations for me while reading, however, not least of which is the relative absence of discussions of transmedia production, which would develop some of the notions of adaptation presented here. Admittedly, there’s a risk that transmedia as a concept would supplant the notion of adaptation in some of these cases (e.g. the Marvel and Castle examples). Translation is also mentioned as a concept in several essays, but this angle is not developed, despite the expanding work in translation studies that could help provide frameworks for analysis and problematize some of the notions that persist in adaptation studies such as fidelity.

The translation of the text is also worth a mention: while I have no doubt to its reliability, I found myself thinking that these texts were very French in their argumentation and style (e.g. they tend to prefer abstract nominalisations over concrete verbs). This is not necessarily a problem, and a theorist like Lawrence Venuti would argue that fluent style should be challenged to allow access to the foreignness of the work (Venuti 1995), but I did wonder whether or not they would be so effective for English-language audiences. That said, the essays are generally well-argued and accessible.

(School of Languages and Applied Linguistics, University of Portsmouth)