Narrative Structure in Comics builds on Postema’s PhD thesis to present for a more general audience her focus on the ‘gap’ in comics and its place in the process of reading graphic narrative, from the detailed textual level up to the level of narrative structure overall. Postema's readings of comics texts are well-argued and illuminating; the breadth of theory brought together here, and the range of exemplars used in analysis, make Narrative Structure in Comics an invaluable reader for those interested in engaging with the practical application of medium-specific theory to comics texts themselves.

Barbara Postema’s 2013 book on the structure of comics texts is beautifully presented by RIT Press, admirably making use of full-colour images in the interior for the comics extracts Postema analyses, and sporting handsome graphic design (Figure 1) which is reflected in the following editions in RIT’s cultural studies and comics scholarship series. Narrative Structure in Comics builds on Postema’s Ph.D. thesis to present for a more general audience her focus on the ‘gap’ in comics and its place in the process of reading graphic narrative, from the detailed textual level up to the level of narrative structure overall. 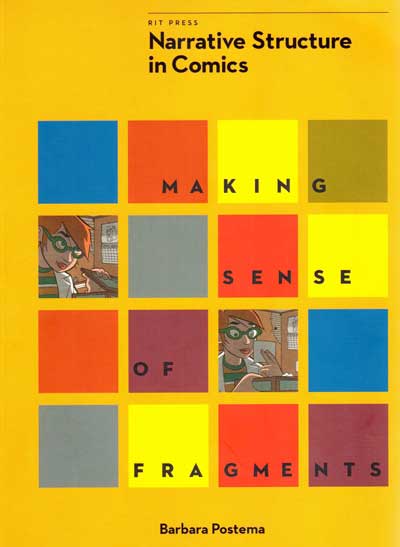 In the same year, two other books in different ways used the resources of language and literature studies to craft an approach to comics: Neil Cohn’s The Visual Language of Comics (2013) and Hannah Miodrag’s Comics and Language (2013). Where Cohn pursues a ‘scientific’ approach to comics form, based on the linguistics of Noam Chomsky, and Miodrag challenges the very idea that comics can be ‘a language’ (having no minimal units), Postema takes a middle line and pursues a reading of comics texts that draws on a wide range of semiotic theory and narratology and aims to synthesise these with the work of comics studies theorists, including the newer approaches offered by Groensteen (2009, 2013).

This short and readable book is structured in five chapters which builds an account of comics narration from smaller to larger elements, with a short framing introduction. Interestingly, Postema defers the sort of general potted history of comics which you might expect to find in an introduction to a separate section in an appendix, where she also offers a glossary of key comics terms. The glossary is a little idiosyncratic — giving extensive discussion of some terms (notably, cartooning), and omitting others (for instance, emanata), and surprisingly conflating yet others (caption and word balloon are treated as one). It would be useful to see this approach reconsidered in a future edition, and a fuller glossary offered. The history is a reasonable 6-page précis which might make a useful section to extract for a course which incorporates the graphic novel — suggesting, perhaps, the audience at which this book is aimed since Postema offers many useful examples of close readings of comics texts with a broad theoretical base, such as might make an accessible model for an undergraduate.

Chapter one discusses modes of signification within the single panel. The framed panel, for Postema, is basic to the operation of comics, since the panel serves to define from the outside the gutter, the key ‘gap’ which provides space for the reader to engage with the comics text creatively. Her main theoretical source in chapter one is Barthes, and the notion of many codes that simultaneously work to construct the text. The gutter is picked up on in chapter two, which focuses on the ‘in-between’ created by the inscription of multiple frames, and draws on Groensteen’s notion of ‘iconic solidarity’ as created by the division of the page into framed panels. Postema particularly specifies that the gap, rather than the frame, is key for her: gaps may be created by white space, but the gutter is always present and operative, even if it is invisible (Postema, 2013: 29).

It is in chapter two that Postema offers the main ‘new’ piece of theory, other than the proposal that the ‘gap’ is central to comics textuality: she outlines a five-part taxonomy of page layouts as an alternative to Groensteen’s tabular system (regular/irregular, discrete/ostentatious), and Peeters’ division into conventional, decorative, rhetorical and productive (2013: 31). Postema suggests: 1. Panels framed by frames separated by blank space; 2. One panel per page (with or without a frame); 3. Several panels per page; 4. Frameless panels; 5. Grids. As she acknowledges, this is not a discrete and systematic division; these approaches may be mixed, in particular, the use of frameless panels.

Chapter three moves to repeated sequences of panels, and builds from the four-panel Peanuts strip, through James Sturm’s The Golem’s Mighty Swing, to a discussion of a section from Shutterbug Follies by Jason Little. The eclecticism of Postema’s choices of texts to analyse is a strength of the book; elsewhere, she discusses a section from The Amazing Spider-Man and a 1940 Fletcher Hanks comic. She acknowledges a preference for contemporary US independent graphic narrative, such as the Lynda Barry or Craig Thompson examples, but often explores beyond this, including newspaper strips such as Calvin and Hobbes, but excluding manga or bande dessinée — the latter perhaps surprisingly, given her use of French-language theory. Her close readings are plausible and interesting, though the point dwelt on about the distinction between image sequences in comics and a sequence of photographs in Shutterbug Follies is a little undermined by the fact that the photograph sequence used is a comics narrative sequence — the images are drawn in the style of photographs, but appear in Little’s graphic novel as part of the narrative. The arguments about types of image sequence are sound, however, and the close readings are instructive.

Chapter four turns to the use of words in the comics text, and here posits another kind of ‘gap,’ that between the two modes of expression (2013: 82). This seems different in order from the kinds of gaps previously alluded, to, which have been more akin to the those which bring about Scott McCloud’s ‘closure,’ and in the work of Wolfgang Iser (1978) motivate the reader to imaginatively participate in the construction of the text. There is a slippage in the usage of terms such as ‘gap’ and ‘blank’ which are both suggestive, but also at times a little obscure — I would have welcomed a more explicit account of the kinds of gaps on which Postema’s readings rest. This chapter affords the opportunity to discuss comics which narrate without words, as well as ones in which words make image redundant (and Postema offers historical reasons why), as well as the management of oppositions and tensions between what is represented in verbal form, and what appears in the images. This tension, in Lynda Barry’s work for example, presents the ‘gap’ as a mismatch between messages, which the reader is driven to reconcile, rather than a lacuna which the reader is to fill.

The final chapter engages with narratology in its attention to the story as a whole, and here there is explicit reference to Iser as well as narratologists such as Seymour Chatman and Barthes, in order to point out that the use of enigmas, absences, and indeterminacies is core to all narrative, including comics. The focus moves to the work of the reader in resolving these absences, and Postema frames Groensteen’s braiding in this theoretical context. She reserves the irresistible pun, ‘Mind the Gap,’ which was used to title her thesis (Postema, 2010), for the final section of the book. The notion of the ‘gap’ is extended to the absence of parents in Peanuts, the vaginal imagery in Black Hole, and the asteroid crater in Asterios Polyp. This broad usage of the term ‘gap’ thereby makes for a usefully flexible motif that ties together her interesting analyses of comics texts.

Those extensive close readings, alongside the beautiful full-colour illustrations of the material under discussion, make this book an excellent example of graphic narrative analysis: Postema’s readings are well-argued and illuminating. It is not always clear that these readings strictly emerge from her central thesis that gaps are essential to comics meanings — often (and rightly) it is the content that gives the basis of the readings; ‘gap’ is often brought in in the final sentence of paragraph of a section, as a way to round off the analyses and link forward to the next. But the breadth of theory brought together here, and the range of exemplars used in analysis, together make Narrative Structure in Comics an invaluable reader for those interested in engaging with the practical application of medium-specific theory to comics texts themselves.

N Cohn, (2013).  The visual language of comics: introduction to the structure and cognition of sequential images. London: Bloomsbury Academic.