The consequences of France's colonial past and wars in Algeria and Indochina are still very relevant in modern, multicultural France. Redrawing French Empire In Comics (2013) examines how this colonial history is depicted in the francophone comic or bande dessinée, by authors with links to both the colonised population and the French colonisers and military forces, and how their depictions of events reinforces or diminishes barriers between those on both sides.

Many decades after decolonisation, France’s colonial history still casts a shadow over many aspects of French national life: national identity as a whole, the experience of immigrant populations in France, international and domestic relations. The continued importance of the events of France’s colonial past in the present can be seen in the array of scholarship published around the former French empire– in particular the prolonged involvement and eventual war in Algeria.

In Redrawing French Empire In Comics, Mark McKinney, author of The Colonial History of French Comics (2011) and professor of French and Italian at Miami University (Ohio), studies representations of two former French colonies, Algeria and Indochina, in the Francophone comic or bande dessinée.

McKinney examines from various perspectives how bande dessinée authors reconstruct national identity post-decolonisation: European-Algerian pieds noirs (i.e., post-1830 settlers in north Africa), French immigrant populations, French soldiers who fought in the colonial wars, colonial soldiers who fought on the side of France. He anchors his analysis around the concept of the ‘colonial affrontier’; a theoretical space which both separates and connects France and its former colonies, where France and the new nations confront each other to either strengthen their division or seek peace, common ground and the diminution of the affrontier, leaving a space of movement and expression (McKinney 2013).

Coined by McKinney in his article ‘The Frontier and the Affrontier: French-Language Algerian Comics and Cartoons Confront The Nation’ (2008), Affrontier is a term he defines as

[T]he frontier, or the limit, beyond which a cartoon or a comic is perceived or treated as an affront to the nation, its symbols and its essential components, including the army, the government and religion. (McKinney 2008, 177) 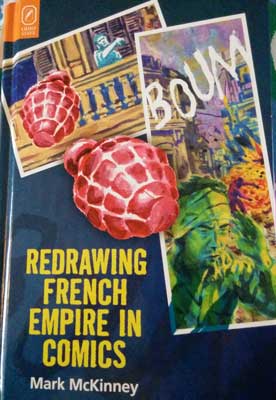 Each of Redrawing French Empire in Comics’ five chapters examines a different area of the colonial experience. Chapter one gives a brief introduction to the medium of bande dessinée, colonialism in popular culture and issues surrounding France’s colonial past. Subsequent chapters feature detailed analysis of colonial Algeria (from 1830 until the outbreak of the Algerian War), the collapse of French Indochina and related conflicts, the Algerian war itself and its aftermath, and finally what McKinney terms “the voyage out and the voyage in”, or the movement of bande dessinée creators and characters to and from the (post) colonial space, and how this movement affects the colonial affrontier in comics.

The work as a whole analyses five genealogies used in comics in reference to the issues of colonialism and imperialism: familial and ethnic, national, critical and artistic, as creators explore their connections to events and/or actors in the colonial past. McKinney examines a large corpus of bandes dessinées from both sides of the affrontier, including amongst others pre-1962 adventure comics with a distinct colonialist bent, featuring daring French soldiers and explorers, more recent bandes dessinées by second-generation immigrants to France, and notably, modern comics written from the pied noir and colonialist perspective. The inclusion of the latter works is important, particularly in relation to the pied noir community and its descendants. Post-1962, pieds noirs’ unique position, considering themselves both Algerian and French (or, as some prefer, French Algerian) has led to a sense of alienation from independent Algeria and mainland France; analysis of the pied noir experience in comics is much less common than that of immigrants from previously-colonised communities in North Africa, particularly in English.

McKinney analyses Colonial Algeria, Indochina and the Algerian War as virtual lieux de mémoire (places of memory) in comics. In the chapter on Colonial Algeria this involves an overview of French cartoons and comics from the conquest of Algeria (1830) until independence in 1962, followed by detailed analysis of the Carnets d’Orient series (1994–2009) by Jacques Ferrandez (1955), a child of pied noir parents. McKinney traces Ferrandez’ artistic inspiration to Orientalist paintings, cartoons and colonial postcards from Algeria, some of which are redrawn in panels of the Carnets d’Orient. He then relates how the Carnets themselves can be seen to influence the bandes dessinées of other, non-pied noir authors, such as Joann Sfar (1971), the author of Le Chat du Rabbin (2003), and how these other authors also reuse and redraw images of colonial Algeria in their work, manipulating the colonial affrontier in the process.

McKinney skilfully links Algeria and Indochina by emphasising the connections between the two colonies (e.g., French war crimes such as torture and napalm use, both occurring in Indochina before more extensive use in the Algerian conflict). Comic representations of Indochina are then broken into broad sections: French comics published during the war, featuring dashing French heroes and various untrustworthy natives; French Indochina as a source of masculine adventure (contrasting masculine France with a feminised Indochina); analysis of the recurring racist tropes present in older comics set in the region and more recent works which invert previously accepted narratives.

The Algerian War in comics is analysed in detail, from several different perspectives, including that of the pieds noirs, French soldiers, Algerian immigrants and harkis (Algerians who fought on the side of France), a marginalised group both in France and modern Algeria. McKinney underlines how creators’ perspectives on the Algerian conflict are affected by their various personal connections to its events– ethnic links, as participants in the war (or their descendants), etc. He also shows how the comics feature creators’ shifting positions in regard to the war and subsequent changes in their portrayal of events.

The book’s final chapter deals with ‘the voyage out and the voyage in’; that is, an overview of how post-1962 bandes dessinées have dealt with those who travel out to (former) colonies, e.g., missionaries, soldiers, and colonial settlers, those who travel in to the power base of mainland France (servants, colonised soldiers, people exported for use in colonial exhibitions, etc.), and how the depiction of characters making these voyages, again, alters and reworks connections between France and the former colonies, undermining or reinforcing the cultural affrontier.

Redrawing French Empire In Comics is an extremely skilled survey of bandes dessinées relating to France’s colonial past in Algeria and Indochina, from a wide range of authors with different experiences of French colonialism, from pro-colonialist (Évelyne Joyaux-Brédy’s Les Rivages Amers (1994)), to reworkings of the war in Indochina as romantic epic (Trafic en Indochine, Stanislas and Rullier 1990) and works detailing the effects of the Algerian war by the children of Algerian immigrants to France (Petit Polio, Farid Boudjellal, 1998–2002), amongst several others.

The large number of works examined and the inclusion of works from several opposing perspectives provide a comprehensive view of the issues involved in analysis of the events and consequences of France’s past colonial actions. The book is perhaps best viewed as a companion to McKinney’s previous work, The Colonial Heritage of French Comics (2011), which covers the use of colonial imagery in French comics in general; McKinney is an expert in analysis of colonial history in comics, and his expertise is evident in this new work.

Overall, the book will be useful to those interested in both comics as a medium and colonial history; previous knowledge of the bande dessinée medium is not necessary, as McKinney gives a brief overview at the start of the book, and all French terms and book titles are translated into English. The book does feature occasional misspellings and typographic errors. Despite this, Redrawing French Empire In Comics is a welcome addition to the growing field of bande dessinée scholarship.