The use of analepsis in representations of traumatic experience is not a new phenomenon in traumatic art in general or comics in particular. However, in GB Tran’s family narrative of the Vietnam War, Vietnamerica (2011), this trope is used in a particular fashion. While discussing his father’s imprisonment at the hands of the Vietnamese Government, Tran uses heavy black art before ‘flashing back’ into his father’s past, all of which is drawn in a style highly reminiscent of Ligne Claire.

The high contrast of Tran’s two artistic styles is especially interesting when we consider that he is trying to recreate a traumatic experience told in analepsis and also when we remember the French occupation of Vietnam and, invariably, the influence of French art on Tran’s father. Why does Tran use this iconic style for the flashback? How does this shift in style affect the narrative? How does it assist in the representation of the traumatic experience within the text?

GB Tran’s family graphic narrative Vietnamerica (2011) recounts the multi-generational story of his family history, starting with his grandparents’ (specifically grandmothers’) experience of the French colonial presence and First Indochina War. The text follows three levels of narration: the historical background of his family, the post-war experience of the two younger generations and Tran’s 2006 visit to Vietnam for the funeral of Thi Mot, his maternal grandmother. The first narrative layer –the historical background– does not work chronologically and jumps from the 1950s to Tran’s childhood in the 1980s, back to the 1970s and so on; the text relies heavily on analepsis. Analepsis is defined as “evocation after the fact of an event that took place earlier in the point of the story” (Genette 1972: 40) – put simply, it is a flashback.

Tran’s mother, Dzung, acts as the narrator for a single scene-setting panel before the narrative shifts back. Though this framing happens throughout the text there is one section which utilises a specific (and iconic) comics style that does not feature in any other part of the text. Tran uses ligne claire to illustrate the flashback-within-a-flashback narrative of his father’s imprisonment by the Army of the Republic of Vietnam, henceforth referred to as the ARVN (2011: 68–91). The term “ligne claire” was coined by Dutch cartoonist Joost Swarte (originally rendered Klare Lijn) and his 1977 exhibition in Rotterdam (Miller 2007: 18). However, the style is synonymous with the Franco-Belgian bandes-dessinée tradition and more specifically Belgian comics artist Hergé. This style “privileges smooth, continuous linework, simplified contours and bright, solid colours, while avoiding frayed lines, exploded forms and expressionistic rendering” (Hatfield 2005: 60). Ligne claire has not been widely used in the American comics tradition, although some artists can be said to employ it and to good effect, most notably Chris Ware in Jimmy Corrigan, the Smartest Kid on Earth (2000). Before performing a close analysis of this section of the text, I wish to prove an outline of trauma theory and how issues of traumatic personal chronology are particularly pertinent to this comic.

For many – notably Freud and Breuer (1896), Herman (1992) and Caruth (1996) – it is one of the most noticeable symptoms of a traumatic rupture that the individual loses their grip on time; their sense of personal chronology is severely disrupted. For Freud, writing in Moses and Monotheism (2011) [1939], this disjunction in personal timekeeping can occur at the very first instance of the traumatic rupture. It is at this moment that the difficult relationship between time and trauma begins for, as Freud writes, the complete psychical effects of the traumatic rupture do not necessarily happen immediately – there is a delay. Freud refers to this as deferred action. Thus the amount of time that may pass before the trauma’s full effect is felt can vary greatly between individuals. However, it remains the case that trauma is, as Cathy Caruth contends, a “break in the mind’s experience of time” (Caruth 1996: 61).

The mind’s protective shield is not engaged in time; the threat to the self is recognised one moment too late. If trauma exists separately from comprehension, then it has never been known fully or, indeed, understood and has therefore not existed in time. It is this lack of temporal understanding and direct experience that causes the traumatic rupture and leads to the development of traumatic symptoms. I reiterate my initial point: time – and the fracturing thereof – has an effect on all other symptoms of the traumatic rupture; it is this rupturing of time that we see in the representation of Tri’s story in Vietnamerica.

In this section, the first flashback (to Tri’s imprisonment) uses dark coloration and black gutters, combined with crosshatching, crowded bubbles and onomatopoeia, to create an atmosphere of uncertainty. However, the darkness and confusion of the images contrast sharply with the uniformity of the panelling, beginning with equally sized and spaced bandeau panels (2011: 69) (Figure 1). 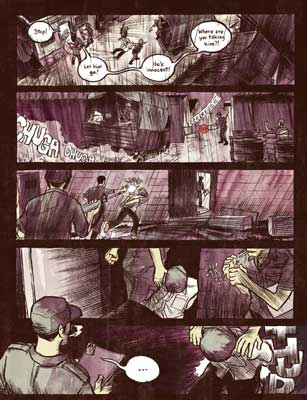 Uniformity of panels generally suggests a steady and mechanical passage of time. This may be the case – Tri cannot know how much time has passed – but this stability of timeframe serves to destabilise the narrative as a whole; it is disconcerting because it jars uncomfortably with the content of the images. The relative size of each instance of onomatopoeia to the rest of the image within each panel suggests two things. First, that the sound represented is extremely loud and second, that the room in which the activity is taking place is small and cramped. As is common in the comics form, the writing style corresponds to the noise itself; the artist writes the sounds as he wants them to be read in order to evoke certain emotions and sensations within the reader. This brings the textual style into direct involvement with the meaning of the words, furthering the onomatopoeic effect.

The second flashback occurs while Tri is in his cell and takes him back into his early life, hence ‘flashback within a flashback’ (I will refer to this as the ‘flash-flashback’). This occurs three times and it is here that the ligne claire comes into play. A trigger in the first flashback takes Tri into the second flashback. The ARVN guards refer to him by his full name, Tran Huu Tri, which moves the narration back to Tri’s first day at school and the occasion of his meeting his best friend, Do (2011: 71) (Figure 2).

Each flash-flashback starts on the right-hand side of the page, creating a stark contrast between the two pages. The cleanness and rich, bold colour of ligne claire seems childlike compared to the roughness of the preceding images. By starting the flash-flashback on the right-hand side, rather than the left, which would require a page-turn, the shift in time is very fast. It happens in the time it takes the reader’s eye to move up the page. Were it presented on the left-hand page, the shift in time would take longer – the time it took to turn the page. Not only would this remove the bold contrast between pages, it would also give the reader more time to pause before moving further back, removing the shock of the sudden time shift and allowing for anticipation of what was about to happen, replacing shock with anticipatory fear (Freud and Breuer 2000: 57). Further to this, ligne claire uses emanata1, especially in the case of someone being punched, to demonstrate the individual’s physical state. This, coupled with a heavy use of onomatopoeia, is typical of the form.

Ligne Claire (capitalised) is more than just an artistic style. It carries with it tremendous iconic weight, thanks to its associations with Hergé and Les Aventures de Tintin. In choosing to use this style, Tran will be aware of these associations. Earlier in the text, while discussing his father’s childhood in a small Vietnamese town, a panel shows him being presented with a copy of Le Lotus Bleu (1936), the 5th book of the Tintin series (2011: 38). This panel acts as a brief hint of what is to come, as well as testifying to the influence of Hergé on both Tran’s development as a comics artist and Tri’s life as an artist. In a later panel, Tran’s mother fumes over his father’s inability to throw anything out and, holding two Tintin books, she says ‘He’s a grown man! When does he ever read comics?’ (2011: 142). The inclusion of Hergé and the watercolourist style of Tran’s artwork both refer to the impact of the French colonial presence on the development of Vietnamese artistic identity, as represented in Tran and his father.

Lecigne argues that ‘the ideological efficacy of the Ligne Claire lies not in what is chosen for depiction, but in the idea that the world is legible’ (Lecigne 1983 in Miller 2007: 19). Ligne Claire is a lens through which the world attains some level of clarity and comprehensibility. Grove writes that many artists ‘reject Ligne Claire precisely to suggest that life is not always clear cut, and that the violent ambiguities of society can indeed be worthy of artistic portrayal’ (Grove, 2010: 183). However, it is precisely for this reason that Tran uses it here. The story contained within the Ligne Claire flash-flashback is not a pleasant, happy childhood memory – in many ways it suggests that Tri had a horrible childhood, fraught with disappointment and negative experiences – but it is important to remember that this is what Tri remembers while locked in a small, dark prison cell. Though his memories are not entirely happy, the lens of Ligne Claire makes them appear clean cut and puts this narrative in stark contrast to the cold and dark reality of his situation.

Tran’s use of triggers for each of the three flash-flashbacks is not only an innovative method of moving the narrative back in time, but also a technique which mimics the triggering of memory and subsequent regression to memory that occurs in a traumatic rupture. It is, of course, common to everyone to find that certain stimuli will trigger a memory but this is more pronounced in an individual who is undergoing – or has undergone – great stress. In this respect, the suddenness of the narrative time shift mimics the shifting of personal chronology that can occur in a traumatic rupture.

At the other end, when the flash-flashback moves forward to Tri in his cell, the ligne claire panels become increasingly thin, with a bandeau panel being sliced into sections, creating the effect of a stuttering filmstrip on a projector. Not only does this give the impression that Tri’s memory is faltering, but it also hints at a filmic nature of memory – that (normal) memories are recorded as if on a long strip of film that plays constantly. Tran plays with this idea most explicitly in the last tier of ligne claire panels, in which Tri’s thoughts are shown as a stream of slides in a thought bubble (2011: 89) (Figure 3). The structuring of this section with multiple analepsis allows Tran to explore key events of his father’s past – as well as the effect of these events on his older self – while also illustrating the nature of memory and traumatic regression. 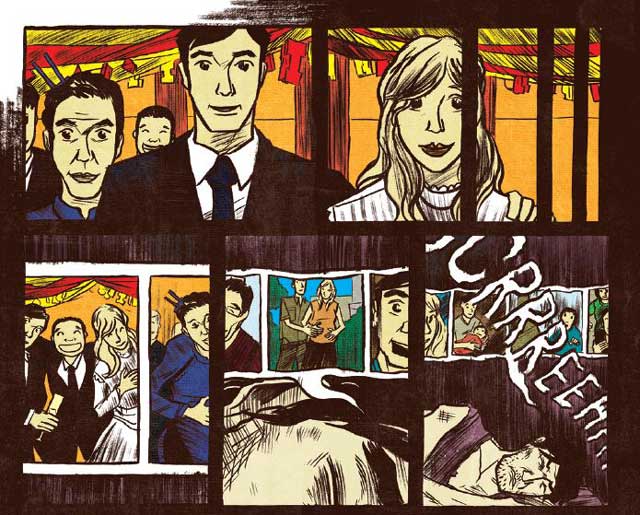 Harriet Earle is a PhD student at Keele University, under the supervision of Dr James Peacock and Dr Tim Lustig. Her research focuses on traumatic representation and conflict in American comics published since the end of the Vietnam War. She is especially interested in the comics form and artistic techniques - and how the form demands a new way of reading that can assist the author in their recreation of trauma.