In her monograph Remembered Reading (2015), Mel Gibson builds on her field work, interviews and meetings with readers of girls’ comics to recover the history and memory of this forgotten genre. Drawing on these shared memories and recollections, Gibson presents a readers’ history of British girls’ comics that reveals how these readings were part of identity constructions and personal histories, tied up to public factors of gender, age and class. In doing so, Gibson revises many stereotypes that have characterized girls’ comics, sketches a much more nuanced picture of the genre, and highlights the complexity of readers’ engagement with comics.

With the immediate backlash against the release of the long-list of nominees for this year’s ‘Grand Prix’ award of the Angoulême comics festival, a list that did not include one single women artist, it seems clear the place of women within comics culture is not yet self-evident, let alone recognized. Before modifying the list and selection process, the FIBD dubiously attempted to defend this lack of female comics artists in their long list by arguing that ‘the Festival cannot revise the history of comics’ (Festival international de la bande dessinée, 2016). This controversy spotlighted the FIBD’s passivity with regard to its own ideological and political role in the making of comics history (Guilbert, 2016) and, moreover, revealed how their version of that history remains one from which women are absent. By contrast, comics scholars such as Mel Gibson and others have precisely taken up this work, by strongly revising the history of comics, casting new light on the role women have played in its development (Chute, 2010; Robbins, 2013).

With Remembered Reading, published at Leuven University Press within the steadily developing ‘Studies in European Comics and Graphic Novels’ series, Gibson makes a particularly rich and original contribution to the study of women’s involvement with comics. Her monograph sheds light on the nearly forgotten genre of girls’ comics, blooming in the UK in the 1950s and 1960s but largely neglected and overlooked by comics historians – were it not for the contributions of Martin Barker, Paul Gravett and Roger Sabin, which Gibson extends and reconsiders in the framework of a systematic and thorough examination of the genre.

A large segment of Remembered Reading is thus devoted to recovering the history of British girls’ comics, which are in the first place forgotten in terms of the material still available: libraries offer no comprehensive collection, publishers such as DC Thompson and Fleetway prevent access to their archive, and girls’ comics are even absent from the collectors’ markets because of gendered patterns in adult consumption (as Gibson shows, few women having read girls’ comics earlier in life strive to recover them at an adult age). Hence, the history that Gibson sketches is largely based on a prior work of reconstructing its archive (listed in an appendix), which also makes of Remembered Reading the first comprehensive overview of the British genre so far, as it carefully describes girls’ comics from their rise in the 1950s to their downfall in the 1980s. Gibson pays particular attention to how this history ties in with the larger history of periodicals for girls and with various cultural constructions of girlhood offered by these titles as they changed and differed over time. The picture that Gibson sketches contrasts with the idea of a monolithic and uniform genre and shows how girls’ comics adapted to changing times and aimed at different audiences based on notions of gender, class and age: this partly explains why the genre faded out from the 1980s on, as the magazine format became more closely associated with girls and women while comics were redefined as male territory.

Next to this rich overview of the various leading titles (from Bunny to Jackie and Tammy) and specificities of girls’ comics, Gibson explores how these texts were mediated by cultural gatekeepers (mostly teachers, librarians and academics) who have simultaneously relied on a ‘media effects’ model reducing readers to mere ‘sponges’ and on a portrayal of comics as problematic texts to be controlled. Following this, girls’ comics have been largely characterized as ‘suitable’ reading for ‘proper’ girls, lending them a lower status than comics for boys which in turn explains why they have fallen into oblivion, as Gibson writes: ‘these comics have often been characterized, along with other popular culture for girls, as part of a painfully conservative and narrow range of products. Hence the gender of the audience contributes to the perception of these comics as less valuable, which has often led to their dismissal by many of those interested in comics’ (Gibson, 2015: 175).

Going beyond the ‘media effects’ model that plagues the perception of girls’ comics, the core of Gibson’s contribution to comics studies lies in its focus on readers’ memories: given the material scarcity of these comics and their neglect in histories of the form, one of the main sources about the genre lies first and foremost in the immaterial and shifting memories of their readers. Drawing her methodology from analogous research on female spectators’ memories in film studies by Annette Kuhn and Jackie Stacey, Gibson extends and enriches the growing trend of audience and reception studies within comics studies (Weiner and Gibson, 2011), as the bulk of the book concentrates on readers’ memories and recollections garnered by the author. Following Kuhn and Stacey, Gibson does not use these memories as straightforward testimonies of past reading practices, but rather envisages them as caught up in a dynamic and ongoing process of identity construction that negotiates various discourses on gender, of course, but also age, family, social class and personal history. 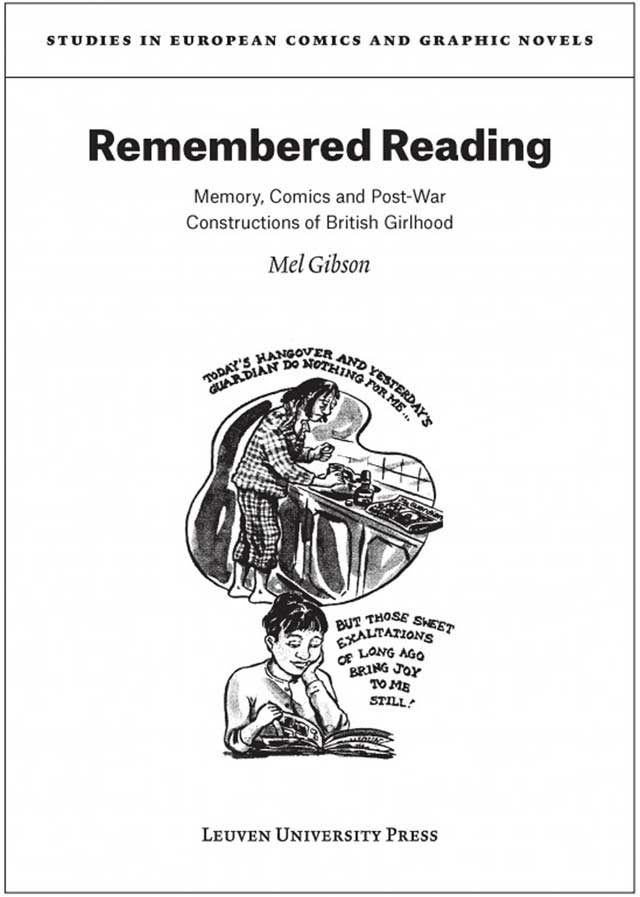 What appears is that girls’ comics were often read and/or remembered in a much less conservative fashion than the stereotypical views on the genre suggest: reading girls’ comics often served as an identity marker, a subtle way to position oneself towards or rebel against parents, peers, class, and authority. Girls’ comics offered models of girlhood that were accepted, challenged and appropriated by readers in a variety of ways and in various cultural contexts, depending on how one consumed them and the reading practices bound up with their consumption. Gibson pays close attention to what specific aspects were remembered by readers: narratives, materiality, pleasure, consumption habits and regulations, and so on. Within this focus on reading practices, swapping comics takes a singular spot as it ‘offers most evidence of a pattern of reading that undermines notions of the girls’ comic as the only reading matter that girls engaged with’ (Gibson, 2015: 146). This leads Gibson to further take into account girl readers of boy’s and mixed gender comics, showing how not reading what was deemed ‘proper’ for girls often functioned as a transgressive act of rebellion that often placed these girls in a marginalized position towards both girlhood and comics culture. Throughout these chapters, Gibson quotes extensively from the interviews, giving a direct voice to these readers and making room for the complexity and variety of responses.

The main thread running through Gibson’s analysis of the interviewed readers’ memories thus highlights how readers have appropriated the texts in their own way, often resisting the conventional models of girlhood or femininity that they proposed. By extension, she succeeds to debunk many of the stereotypical views that have relegated the genre to the margins of comics history. Through ‘a readers’ history of comics’ (Gibson, 2015: 189), Remembered Reading not only invites readers and scholars to (re)discover the forgotten genre of British girls’ comics, but also puts forward compelling new ways to think about the history and memory of the medium.