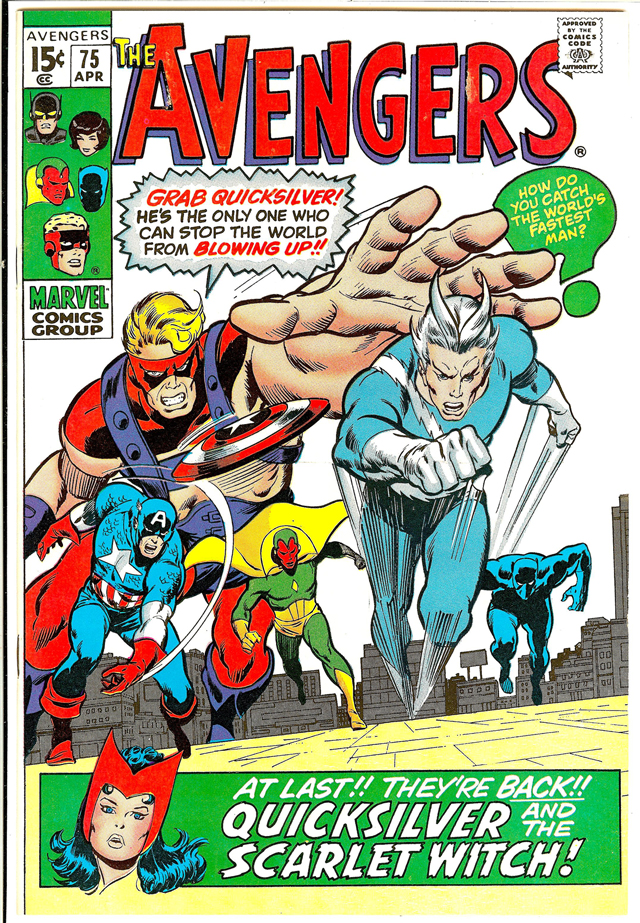 Quicksilver is depicted as running using the literal pictorial devices of posture, orientation, and ground plane, and the metaphorical device of action lines. This is an example of a comic book artist using multiple literal pictorial devices with a single metaphorical device. Buscema, J (p), and Palmer, I (i). The Warlord and the Witch! The Avengers #75 Apr. 1970 Marvel Worldwide Inc. © Marvel Comics.

For our analysis of how artists depict motion in comic book covers, we examined specific features of a picture, called pictorial devices (Visual Arts: Glossary n.d.). We will focus on five specific pictorial devices that are often used when depicting motion: (1) posture (arm and leg positions), (2) orientation (body lean), (3) the ground plane, (4) action lines (lines that indicate past paths of motion), and (5) multiple images (images that indicate past states of motion) (Carello, et al. 1986, see Figure 2). Carello et al. (1986) showed that pictorial devices contain information that allows motion to be perceived in a static picture. We will investigate how comic book artists combine these pictorial devices to produce depictions of motion. 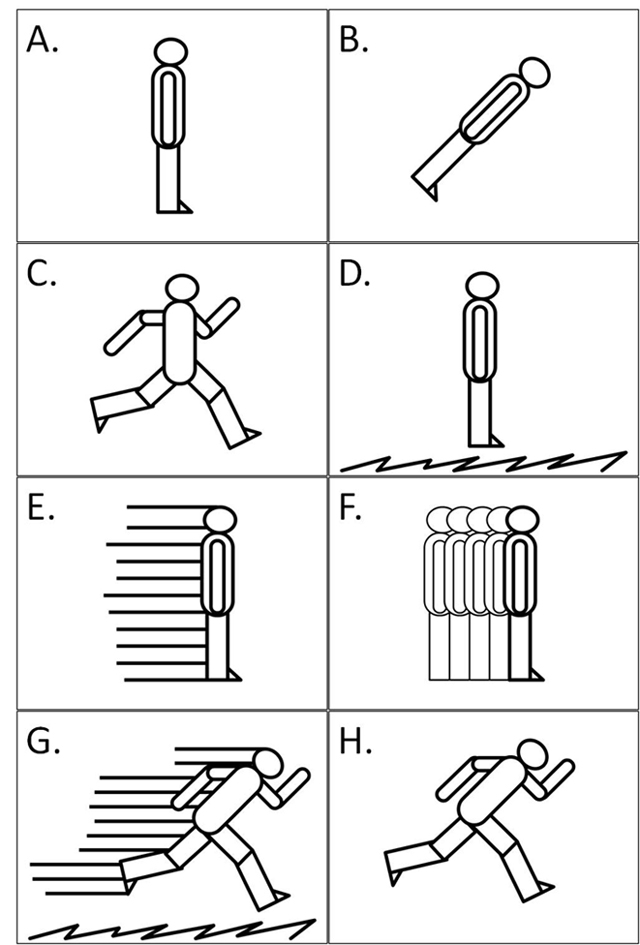 A schematic illustration of the five pictorial devices analyzed in this study and how they can depict running: (A) no devices, (B) orientation, (C) posture, (D) ground plane, (E) action lines, and (F) multiple images. Artists can use combinations of these devices to create effective depictions of running, for example: (G) orientation, posture, ground plane, with action lines, (H) orientation and posture (based on Carello, et al. 1986).

The specific titles were chosen based on the popularity of their characters in the Silver and Bronze Ages, as well as their current familiarity to both comic book readers and the general public (all five titles have been recently adapted into major motion pictures that each grossed between $370,000,000–$1,519,000,000 worldwide, Box Office Mojo, n.d.).

Finally, the 100 consecutive issues for each title were chosen so that: (1) a variety of artists would be sampled and (2) the issues began as early as possible in the Silver Age. For example, the 100 issue run of The Amazing Spider-Man began with issue #39 rather than issue #1 due to Steve Ditko being the only cover artist for issues #1–38.

Finally, we selected 100 covers of The Mighty Thor to develop and refine the criteria used to determine (1) if running was depicted on the cover and (2) what pictorial devices were used. The 400 covers from The Amazing Spider-Man, The Avengers, Captain America, and The Invincible Iron Man were then analyzed using these criteria.

There are 21 unique artists whose work is included in the analysis, including established names such as Jack Kirby, Neal Adams, Gil Kane, Barry Windsor-Smith, John Romita Sr., Jim Steranko, and John Buscema. Table 2 lists all the included authors as well as the number of their covers that were analyzed for the study.

Across the 400 covers, there were 75 total depictions of running. Figure 3 shows the frequency with which each combination of pictorial devices was used in these 75 depictions. 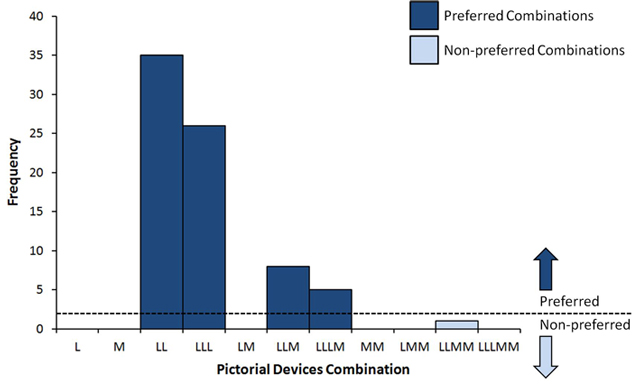 Named after French mathematician, geometer, and physicist Siméon Denis Poisson, the Poisson distribution expresses the probability of a given number of events occurring in a fixed interval of time and/or space if these events occur with a known average rate and independently of the time since the last event (Haight 1967). Here we use the Poisson distribution to analyze the frequency with which the different pictorial combinations were used in the 75 depictions. Because there were 75 depictions of running in the 400 comic book covers, and there are 11 possible combinations of pictorial devices (see Table 3), the average expected frequency for any pictorial device combination is 6.8. In other words, if the selection of pictorial devices by the comic book artists was random, then each combination should have been used approximately 6–7 times (out of the 75 depictions of running). For our analysis, a pictorial device combination was considered preferred by artists if it was used at (i.e., not significantly different from) or above (i.e., significantly greater than) the average amount (6–7 times). On the other hand, a pictorial device combination was considered to be non-preferred if it was used below (i.e., significantly less than) the average amount. 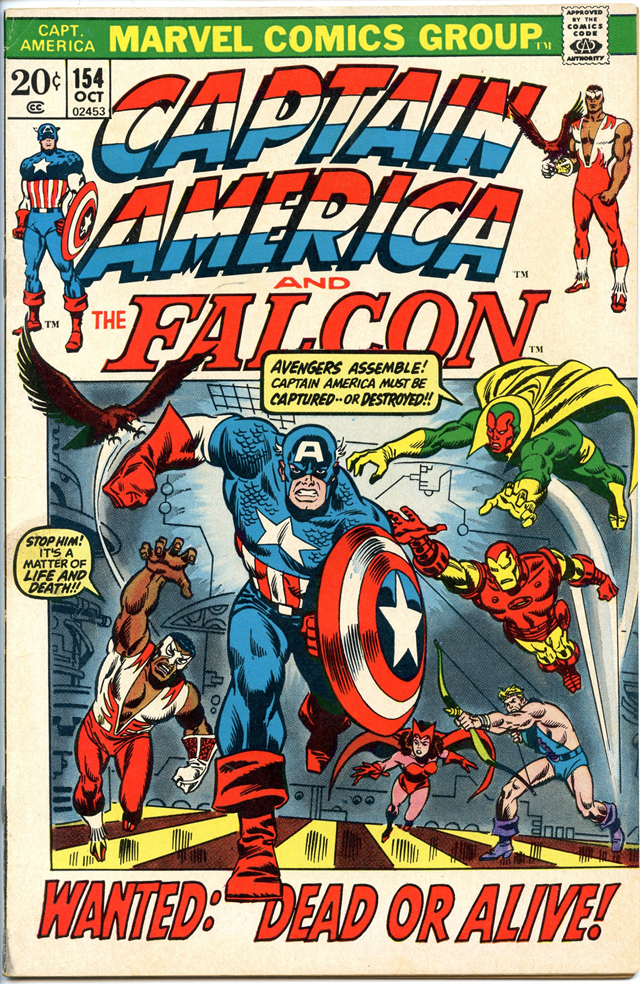 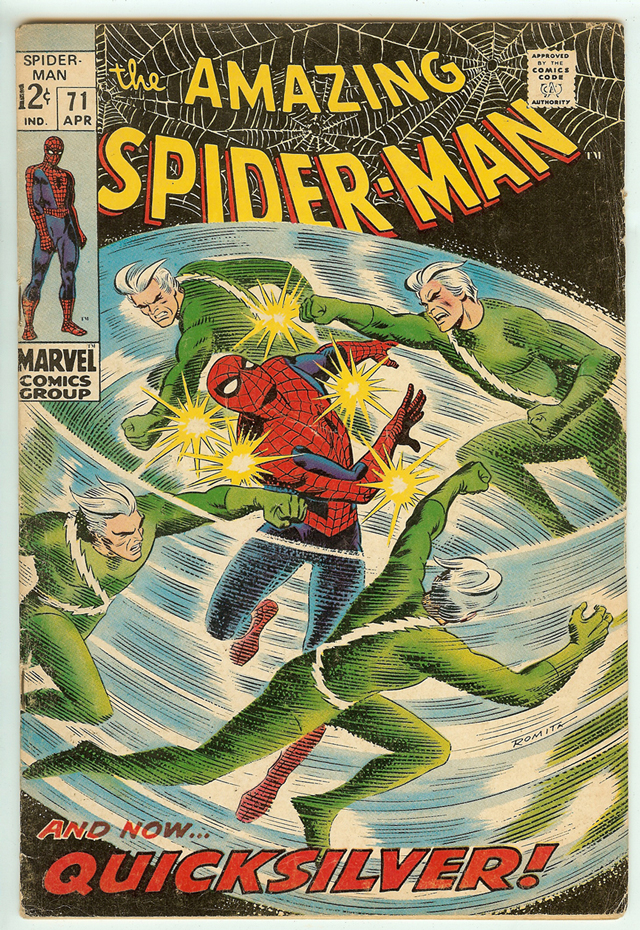 The authors declare that they have no competing interests.