The call for papers Brilliant Corners: Approaches to Jazz and Comics was published on 30 July 2015. In it, the editors made a public invitation for scholarship that proposed meeting points between the disciplines of jazz studies and comics studies. This editorial discusses the motivations for the collection, the editorial methodology, and the research articles included. Finally, the editors suggest some areas in which jazz studies and comics scholarship might address under-researched and fertile topics.

The popular forms of jazz and comics have shared similar historical and cultural tendencies. As expressions of modernism, they have been subject to the demands of the marketplace and consumed by wide and varied audiences. Yet the liberatory qualities of comics and jazz have provoked concern in moral guardians, particularly in relation to the subcultures they have generated. Recalling Bourdieu, we might note that, within these subcultures, very divergent and often incompatible judgements are fiercely defended (1993: 30).

In the 21st century, both jazz and comics are accepted as art forms. However, this elevated cultural position has arguably come at a price, contributing to the restriction of some forms of jazz and comics to specialised spaces of purchase and consumption. Over the last forty years, the fields of jazz studies and comic studies have gained currency within the academy and have been enriched by interdisciplinary approaches. The New Jazz Studies has invigorated the discipline beyond its musicological roots, while Comics Studies has thrived in the digital age.

When we published the call for papers Brilliant Corners: Approaches to Jazz and Comics on 30 July 2015, we aimed to find meeting points between the disciplines of jazz studies and comics studies (Pillai and Priego 2016). We were encouraged by the fact that distinguished jazz musicians such as Wayne Shorter, Sonny Rollins, Herbie Hancock and Vince Guaraldi have each stated the influence of comic books on their musical development, while artists and writers have frequently turned to jazz for inspiration (e.g. see Blutch 2013 or Pekar 2004: 19–20 and 2005: 135–141; Figure 1). Jazz musicians have been the subjects of comic strips, graphic novels and graphic biographies (e.g. Charlie Parker: Handyman by Paul O’Connell; Lawrence Elwick serialised in The Stool Pigeon; the 65 albums from the BD Jazz series by Éditions Nocturne) and jazz musicians themselves have created comic strips (Wally Fawkes/Trog). 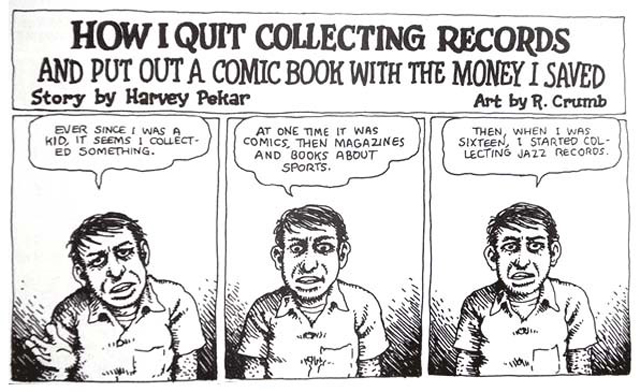 We were interested in encouraging the development of existing scholarship on jazz and comics as cultural and artistic practices within specific contexts and specific material conditions. As editors, we wanted to provoke open access work that emphasised interconnection and the multimodal. We also assumed that comics and jazz are popular forms and that, needless to say, they are of interest to public audiences. As Heller and Gaede point out in a recent article,

[P]articipating in open access is a critical part of preserving the public sphere […] [O]pen access initiatives […] are a vital public and social good. They undercut a hegemonic model of scholarly publishing, make academic discourse more accessible to those outside the academy, and allow more diverse voices to participate (Heller and Gaede 2016: 4).

We subscribe to the ‘altruistic impact’ discussed by Heller and Gaede, and our call was indeed guided by a desire to encourage open and accessible scholarship on topics that contribute to the contemporary public sphere.

The deadline for submissions was 15 January 2016. As is standard in the Comics Grid’s workflow, each article went through three stages of copyediting (once by authors and twice by editors) and two stages of proofing once the articles were typeset. The articles accepted for inclusion in this collection were not published simultaneously as a ‘bulk’ or single issue, but individually in the order that they went through peer review and became ready for publication. This experimental process was intended to address ways in which the ‘journal issue’ has changed as a result of digital consumption. Similarly, this is a ‘retrospective’ editorial, drafted and published at the very end of the process, only after the research articles themselves have been published. They can all be found under this web address: http://www.comicsgrid.com/collections/special/brilliant-corners/.

Each of our authors faced a methodological challenge common to interdisciplinary work: in this case, how to synthesise/integrate jazz historiographies, vocabularies and narratives in a meaningful way for comics studies? For us as editors, this was the overriding question that framed the collection, one that each article approached in a slightly different way.

In ‘Playing Together: Analyzing Jazz Improvisation to Improve the Multiframe’ Powers & Grimm (2 June 2016) argue that the design of multiframe comic pages are best understood through the systematic application of musical concepts. Their insights are generated through a process of collision – establishing and then facing off the seemingly incompatible (Sonny Rollins vs Green Lantern, Joshua Redman vs The Flash) in a critical ‘cutting contest’. This process of juxtaposition is highly appropriate to the jazz tradition, which often generated innovation through the intermingling of musicians of different generations and/or styles (a technique especially favoured by record producer Norman Granz). By choosing to focus on superhero comics, Powers & Grimm assert the music’s popular appeal, proposing a model for textual analysis in the study of jazz and comics.

In “‘Ragged Time’ in Intra-panel Comics Rhythms”, Shores (8 July 2016) chooses case studies from a quite different realm of comics, the Cubist-inspired panels of Art Spiegelman and Mary Fleener. In his phenomenological analysis, and with reference to Deleuze and Messiaen, Shores considers the spaces between panels and their relationship to irregular visual rhythms. Unlike Powers & Grimm, who associate comics with hard bop and post-bop, Shores finds an assonance with ragtime and its ‘ragged’ syncopation. Acknowledging the arbitrary nature of his textual examples, Shores brings us closer to the sequential nature of both comics and music.

In the collection’s final article, “New Zealand Jazz Concerts, the Use and Abuse of Grand Pianos, and One Cartoonist’s Response”, Ward (23 August 2016) employs archival research in an exploration of the relationship between local jazz scenes, satire and ongoing newspaper strips. This approach favours close readings of comics within their socio-historical contexts. A comparative analysis of strips created by New Zealand Herald cartoonist Gordon Minhinnick positions jazz in Auckland public life as a discursive field, elucidating questions of class, public spending and cultural responsibility.

In this way, the collection presents three distinct approaches to comics scholarship but also three very different conceptions of jazz. A range of case studies are presented: superhero comics, indie comics and the often-neglected form of the newspaper cartoon. It hardly needs to be said that the work here is not exhaustive; rather, the collection aims to be a first step towards continuing work on jazz and comics, and a provocation for future scholars.

The Shape of Scholarship to Come

In 2015, Kamasi Washington released his debut studio album The Epic. Clocking in at nearly three hours of music, this virtuosic work confounded trends in modern jazz-making. When interviewed by Rolling Stone magazine, Washington revealed that he was working on a graphic novel and that its concept had directly influenced the long-form edit of The Epic (Walls 2016). The vinyl reissue of The Epic would contain preview inlays for the forthcoming graphic novel (adaptation and calligraphy by Kenturah Davis, art by K C Woolf Haxton; Washington 2016). Evidently, the links between jazz and comics continue to develop and intertwine.

We conclude this editorial with some suggestions for areas in which jazz studies and comics scholarship might address under-researched and fertile topics. No doubt there are many more.

We are convinced that the combination of jazz and comics is likely to produce interesting and challenging future scholarship. This research to come could play an important role in building bridges between different disciplinary approaches and, importantly, between academic research and the public. The Comics Grid will be delighted to consider future work on jazz and comics through its ongoing open submissions process through http://www.comicsgrid.com/submit/start/.

This collection would not have been possible without the hard work of other colleagues. Our thanks to Peter Wilkins and members of the Comics Grid editorial board, Samuel Moore, Tommaso Olivero, Paige MacKay, Abhijit Pathre, and Martin Eve and Caroline Edwards from the Open Library of Humanities. Our gratitude to all the authors who submitted work for consideration.

The authors declare that they have no competing interests.