This article reproduces a poster presented at the Socio-Legal Studies ­Association annual conference, 5–7 April 2016 at Lancaster University, UK. The poster outlines the emerging study of the legal and jurisprudential dimensions of comics. Seeking to answer the question ‘what is graphic justice?’, the poster highlights the variety of potential topics, questions, concerns, issues, and intersections that the crossover between law and comics might encounter. A transcript of the poster’s text is provided for easier reuse, as well as a list of references and suggested readings.

The poster reproduced here (Figure 1) was presented at the Socio-Legal Studies Association annual conference, 5–7 April 2016 at Lancaster University1. This poster outlines the emerging study of the legal and jurisprudential dimensions of comics. 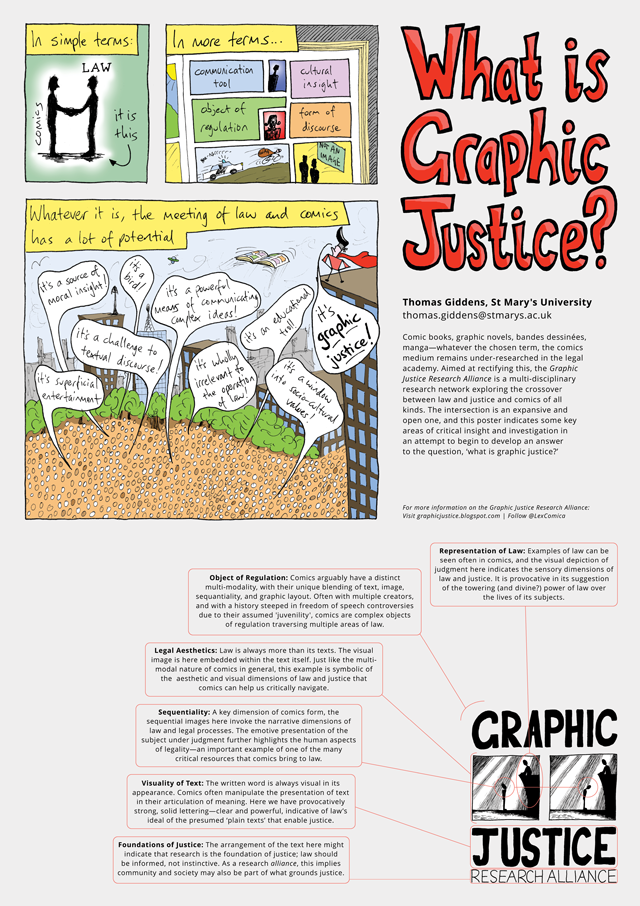 “What is Graphic Justice?”.

Seeking to answer the question ‘what is graphic justice?’, the poster highlights the variety of potential topics, questions, concerns, issues, and intersections that the crossover between law and comics might encounter. The poster also seeks to employ the comics form in its articulation of the vast potential of this under-explored area of legal and comics study.

The poster was created primarily through manual illustration, with images scanned into GIMP 2 where they were digitally coloured, formatted and arranged, with digital text and graphics added. The reproduction here has been slightly amended (inclusion of author and Alliance details) from that originally presented at the conference. As the poster is an image file, a transcript of the poster’s text is provided below to enhance discoverability and reuse.

Comic books, graphic novels, bandes dessinée, manga—whatever the chosen term, the comics medium remains under-researched in the legal academy. Aimed at rectifying this, the Graphic Justice Research Alliance is a multi-disciplinary research network exploring the crossover between law and justice and comics of all kinds. The intersection is an expansive and open one, and this poster indicates some key areas of critical insight and investigation in an attempt to begin to develop an answer to the question, ‘what is graphic justice?’

Representation of Law: Examples of law can be seen often in comics, and the visual depiction of judgment here indicates the sensory dimensions of law and justice. It is provocative in its suggestion of the towering (and divine?) power of law over the lives of its subjects.

Object of Regulation: Comics arguably have a distinct multi-modality, with their unique blending of text, image, sequentiality, and graphic layout. Often with multiple creators, and with a history steeped in freedom of speech controversies due to their assumed ‘juvenility’, comics are complex objects of regulation traversing multiple areas of law.

Legal Aesthetics: Law is always more than its texts. The visual image is here embedded within the text itself. Just like the multi-modal nature of comics in general, this example is symbolic of the aesthetic and visual dimensions of law and justice that comics can help us critically navigate.

Sequentiality: A key dimension of comics form, the sequential images here invoke the narrative dimensions of law and legal processes. The emotive presentation of the subject under judgment further highlights the human aspects of legality—an important example of one of the many critical resources that comics bring to law.

Visuality of Text: The written word is always visual in its appearance. Comics often manipulate the presentation of text in their articulation of meaning. Here we have provocatively strong, solid lettering—clear and powerful, indicative of law’s ideal of the presumed ‘plain texts’ that enable justice.

Foundations of Justice: The arrangement of the text here might indicate that research is the foundation of justice; law should be informed, not instinctive. As a research alliance, this implies community and society may also be part of what grounds justice.

An outline proposal for this poster was peer reviewed before its acceptance for presentation at the SLSA 2016. The author is a section editor of The Comics Grid: Journal of Comics Scholarship and leads the Graphic Justice Research Alliance. This note was handled by another editor and underwent a standard triple-copyediting process.

A Nyberg, (1998).  Seal of Approval: The History of the Comics Code. Jackson: University Press of Mississippi.