This book review provides a brief overview of the collection Boys Love Manga and Beyond: History, Culture, and Community in Japan, edited by Mark Mclelland, Kazumi Nagaike, Katsuhiko Suganuma and James Welker (University Press of Mississippi, 2015). The review offers a summary of the main topics covered in the collection, and discusses its strengths, weaknesses and implications for other academic fields from the perspective of a scholar specializing in Education, Children’s Literature, Literacy and Diversity. 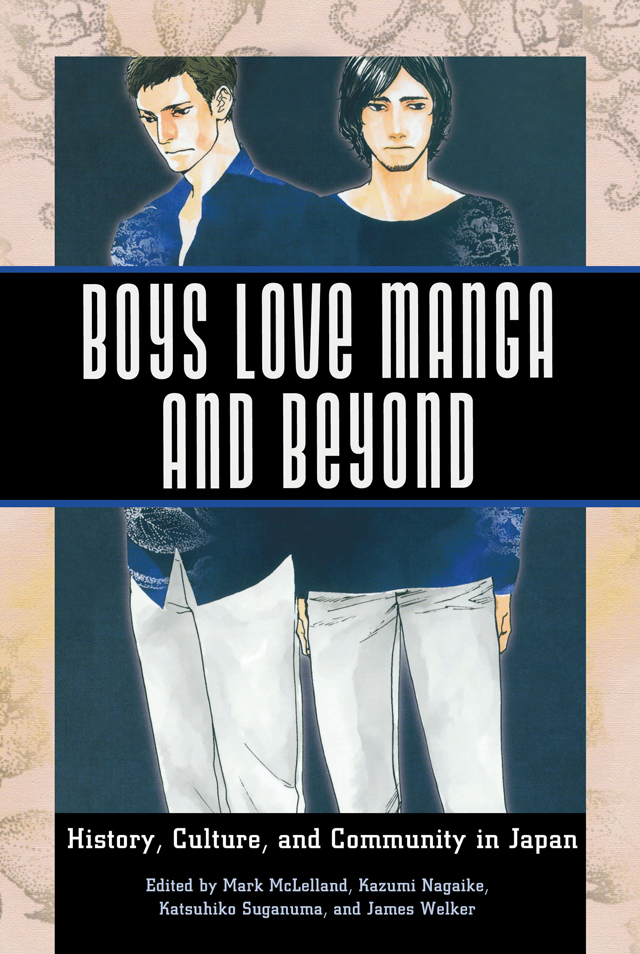 Cover of Boys Love Manga and Beyond: History, Culture, and Community in Japan. McLelland et al, (Eds.) 2015. Reproduced with kind permission of University Press of Mississippi.

The authors whose work is included in this collection have made an attempt to make manga scholarship accessible for readers and scholars whose specialism is not comics or manga by providing definitions and explanations of the terms used throughout the text. However, the volume itself can be a dense read, including plenty of jargon related to manga and cultural historiography, providing detailed explanations of manga culture and exploring the nuances of BL manga. Academics and graduate students focusing on the study of manga and BL will find this collection useful as stand-alone resource offering an overview of the various topics and themes including sexual identities, female and male identities, the male body, experiences with love, power relationships, politics, and how images are used to convey emotion.

The list of contributors is international and include historical researchers, ethnographers, and media researchers: Tomoko Aoyama, Patrick W. Galbraith, Barbara Hartley, Jeffry T. Hester, Ishida Hitoshi, Mark McLelland, Kazumi Nagaike, Rio Otomo, Katsuhiko Suganuma, Kazuko Suzuki, James Welker, and Fujimoto Yukari. The disciplinary approaches and methods used to collect the data for this volume include literary analysis, historiography, critical studies, ethnographic research, and cultural studies. The collection’s main strength is the critical historical analyses presented: it is noticeable that extensive documentary research and literature review were required in order to craft each chapter. The collection is therefore a great primer for anyone who wants to learn about the history, content, and trajectory of BL in particular and manga in general. If you are novice in this manga and BL or have no background in this area, this book provides a useful grounding of this literature. The popularity of these texts across the globe warrants a closer look at the texts in which these readers engage and this collection offers a useful tool to approach them.

Many of the thirteen chapters in this collection focus on the history of BL comics and graphic novels in Japan. We learn that the content of the narratives can be classified as science fiction, romance, erotica, suspense, and mystery, and that the cultures around BL manga include a shifting of high and low culture from Japan, Europe, and America. As expected, the book looks at how gender identity and constructions of sexuality are a major component of BL works. The volume provides an exploration of the role of women as pioneers in crafting and defining the genre and subgenres, and provides a historical overview of their content, describing their romantic and erotic nature. Other major topics discussed in the collection include bisexuality, homosexuality, pornography, the role of traditional feminism, second wave feminism, gender categories, and queer studies. These topics are discussed in relation to whether the graphic images that compose these narratives show an awareness of or an indulgence in ‘overtly sexual’ relationships (p.38).

Manga texts can be subversive, revolutionary, and inflammatory. They can also use simple or detailed illustrations to illustrate the author’s meaning. Panels in manga often signal a childlike experience for both pre-teens and teens; a great deal of the content of graphic novels exposes young teens to politics, violence, overt sexuality, and the adult world. It is in this context that a weakness of this collection is the lack of a stronger focus on the ethical issues and current controversies of the content of this genre. Though there were ample opportunities to provide an extended discussion of the historical and contemporary ethical controversies throughout the text (pp. 141, 219), these issues were not covered again until briefly at the end of the book. As educators and academics, I’d argue it is important to ensure those who advocate, study, distribute, and market this literature to preteens, teens, and young adults understand the cultural significance and the potentially controversial ethical issues presented by the books we are shelving in libraries and schools (for more context, see Pagliassotti et al 2013).

Taking into account the controversial nature of these texts and the backlash from conservative political groups should be critical in consideration of their growing mainstream popularity (see for example Wood 2013). I suggest scholars should engage critically with attempts to ban manga and discuss in detail if censorship and book banning has played a role in shaping it as a cultural phenomenon, as well as explore the way manga has been marketed in the US and other countries in the light of this controversy (pp. 253–254; see also McLelland 2005 and Brienza 2014). However, the shifting or reimagining of manga in light of the backlash is not examined in this collection; though there’s English language scholarly work on this area (e.g. McLelland 2014; Madill 2015), this is an ongoing project for more future research on Boys Love manga.

The editors did an excellent job of crafting a collection that provides a historical and contemporary analysis of BL manga as a genre. I highly recommend this book for scholars in the fields of Literacy Studies, Gender Studies, Library Science, Media Studies, Communication Studies, Art Studies, Graphic Design, Illustration, Composition and Rhetoric Studies, and Children’s Literature, as this this book could be included in the syllabi of introductory courses at master’s and doctoral level. In order to understand manga and its genres and subgenres, it is imperative that those who study them and teach fans of this literature understand how these comics are crafted and how its subgenres are historically and culturally shaped (see Choo 2008). This collection is useful for those interested in studying, collecting and advocating the reading of manga, as well as for those working with graduate students in various fields impacted by manga.